The ambitious, bold and hungry start their week with The Business of Business!
Innovation
7.23.19   3:15 PM Innovation

Biglari Holdings' ($BH) Steak 'n Shake, founded in Indiana in 1934, has about run its course, if the credit ratings are to be believed.

But, the alternative data isn't terribly reassuring, either. Facebook ($FB) Talking About Count for the fast-casual restaurant has plummeted over the years, a fairly strong indicator that a brand can no longer drum up chatter online to support marketing campaigns.

After being founded by Gus Belt in the 30s, Steak 'n Shake's expansion was mostly concentrated to the American midwest. By 2008 - when Biglari had to rescue the company from its debts - it had expanded coast-to-coast; today, our map tracks current locations. 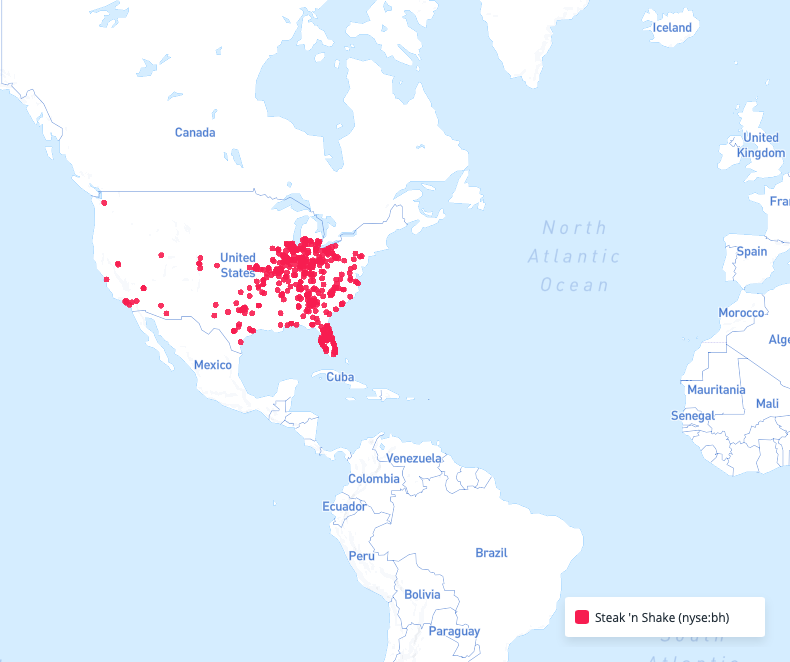 And, after a decade of expansion under Biglari, Steak 'n Shake found itself in trouble once more. Now, ratings agency S&P has slapped the company with a debt downgrade - to CCC-, or non-investment grade, commonly referred to as 'junk' bond status - on expectations the company "will be unable to meet its financial obligations," namely, a loan of which more than $180 million remains outstanding.

When a company has cut costs to the point it's put a cost-benefit-analysis on whether or not to top a sundae with a cherry, it's safe to say a brand has hit hard times.

Biglari Holdings, the parent company of Steak 'n Shake, has seen shares routed after a long run on public markets, losing nearly 50% of their value over the last 12 months. The Texas-based holding company has ample assets on which it can rely if and when Steak 'n Shake's sizzle is no more... For now, at least.

Biglari also owns FirstGard Insurance, restaurant chain Cracker Barrel, as well as Maxim Magazine, which it bought in 2014. And, even that business isn't performing well - our final chart is perhaps the ugliest image anyone has been able to affiliate with Maxim since the lad mag was launched in 1995.