The ambitious, bold and hungry start their week with The Business of Business!
Innovation
4.20.22   7:22 PM Innovation

If your love language is memes, Schmooze is the dating app for you

Schmooze’s humor-centric approach to matchmaking has amassed over 300,000 users since it was launched on a college campus in 2020.

If you’re tired of Tinder and you’ve stumbled with Bumble, you might want to try out Schmooze. The dating app invites users to “swipe memes, not people," matching them based on their sense of humor.

If a meme had you chuckling, you swipe right. Swipe left if you’re not amused. And swipe up if you find yourself ROFLing. After a few swipes, Schmooze’s algorithm gives you a “#matchrec,” displaying a profile of a person with similar meme predilections. This is where the app starts to behave like all the other swipe-driven analogues, albeit with a meme-based twist. You have to make a decision whether to “schmooze” or “snooze” this person who has been vetted for humor compatibility.

To help you make the snap judgment of this total stranger, you can scroll to see the traditional elements of a dating app profile. Photos and basic demographic info are complimented by a description of their “life in memes” and the list of the memes you “vibed” on.

The founder and CEO Vidya Madhavan got the idea for Schmooze from her personal romantic success. She met her now-spouse on Linkedin and the couple first hit it off by exchanging jokes over email. The experience made her appreciate the power of humor to foment human relationships and she decided to harness it to help meme-obsessed Gen-Zers find love. 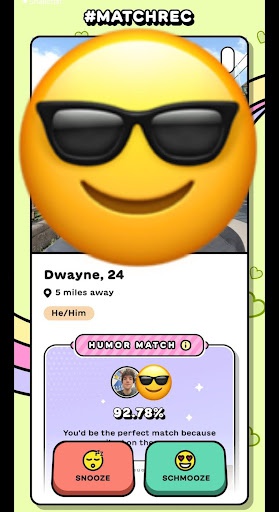 Like most of its user base, Schmooze is in the springtime of life. Its 27-year old CEO graduated from Stanford business school just last year. Around the same time the company got seeded with $270,000 from Ulu Ventures and is currently focused on getting people to start schmoozing. Its publicity strategy involves dispatching ambassadors to college campuses, sponsoring college events, and advertising on TikTok. A recent shoutout from The Late Show with Stephen Colbert gave it a major visibility boost.

So far, the college-focused strategy has been paying off. Since its launch as a beta test with 200 Stanford students in the summer of 2020, Schmooze has amassed over 300,000 users. Though most of its usership is concentrated in Los Angeles and the East Coast, it is rapidly taking on new markets. It recently launched a marketing effort on college campuses in Boston.

Schmooze is entering a crowded field in the multi-billion dollar dating app industry. The likes of Tinder and Bumble are long established brands and have millions of users. And Schmooze is certainly not the first dating app to bill itself as anti-superficial, claiming to facilitate connections that aren’t inspired solely by looks. Its memes will have to compete with gimmicks like questionnaires and gradual face reveals.

But what Schmooze has going for it is that it offers something to users not looking for romance.

Its collection of 5,000 memes, carefully curated by its cadre of meme officers, keeps users engaged even if they’re not getting matches.

As soon as I downloaded the app (after getting permission from my girlfriend) to research this article, I was immediately hooked. I was certainly not looking for romance and spent longer than I care to admit staring at memes curated to my pre-selected interests.

I did match with a Northeastern University student (we vibed on a SpongeBob-themed meme satirizing the double standards applied to the U.S when it invades other countries), who told me he’s there “to see memes and meet people [non-romantically].” He got on Schmooze after it sponsored an event organized by an on-campus organization that he is a part of. While he might not find his soulmate on the app, at least he’s guaranteed a few laughs.