The ambitious, bold and hungry start their week with The Business of Business!
Features
4.25.22   6:23 PM Features

Traditional automakers have economies of scale vastly in their favor, and some of their electric vehicles are pretty good, too.

Glitzy EV startups like Tesla and Rivian get most of the attention when it comes to transitioning to carbon neutral transportation. They have been basking in the limelight with sleek designs, multi-billion dollar valuations, and blockbuster public offerings. Despite the massive hype, some EV companies have raised eyebrows even before delivering a single vehicle with missed production targets or alleged fraud.

Meanwhile, traditional automakers are flying under the radar as they slowly enter the EV space. The boring old Hyundais and Fords of the world are quietly capturing market share and some have bold plans to deliver millions of vehicles in the next few years. Others are just starting to unveil their first EVs, with consumer demand spurred by government subsidies for sustainable transportation and investments in charging infrastructure.

Some legacy automakers have been producing plug-in electric vehicles, which can switch between hybrid and fully electric mode, yielding a fuel efficiency that far exceeds that of regular hybrids. These vehicles serve as a stepping stone for those eager to move past their gas guzzlers but aren’t ready to go all on the all-electric life.

Traditional automakers have a few things going for them when it comes to winning the EV race. They have established supply chains and infrastructure required to produce cars at scale, as well as the brand recognition to market them. And so far, they’ve shown that they’re able to deliver EV at a more affordable price point than the EV-only startups. While a Nissan Leaf might be less of a sexy ride than a Tesla Model 3, it’s certainly more accessible to an average family looking to ferry kids to soccer practice.

We took a look at some of the legacy automakers that are building EV manufacturing capacity and positioning themselves to give the EV unicorns a run for their money.

Volkswagen enraged just about everyone in 2015 when it was caught designing its car engines to cheat emissions tests in the U.S. But now the German automaker is recovering its reputation with large strides to electrify its product offering. It doubled its EV sales last year, giving it the second largest market share after Tesla.

In 2021, its parent company Volkswagen Group sold 452,900 battery electric vehicles worldwide, across all its brands including Audi and Porsche. Though this amounts to just over 5% of its global deliveries, the company plans to rapidly shift this ratio in the favor of EVs.

Volkswagen aims for half of its car sales to be electric by 2030, hoping to phase out the combustion engine altogether by 2040. And the company is getting serious about its EV supply chain, hoping to build six battery factories in Europe by the end of the decade. Each of these facilities will have a 40 gigawatt-hours capacity, exceeding the 35 gigawatt-hours that Tesla boasts at its flagship Gigafactory in Nevada.

Last year was a tough one for GM’s EV operation. It was forced to pause production of its fully electric Chevrolet Bolt vehicles and recall thousands of units after multiple incidents with their batteries catching on fire. This caused some observers to quip that GM was so focused on making traditional gas-guzzling engines that even its EVs involve some form of combustion. Elon Musk was reveling in schadenfreude as he watched the company deliver a measly 26 EVs in the last quarter of 2021. 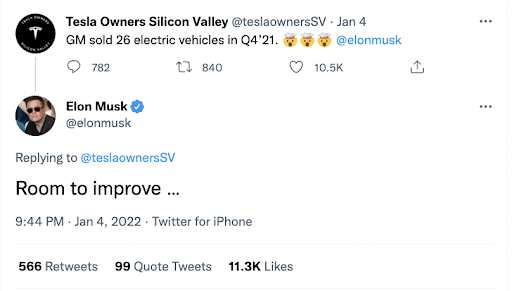 However, discounting the short-run humiliation, GM’s potential to become a major EV industry player cannot be underestimated. The company sold almost 25,000 EVs last year, most of them Chevrolet Bolts. While this is nothing to write home about compared to the 936,000 delivered by Tesla, GM is determined to play catchup.

The biggest automaker in the world is preparing to start selling its first widely available EV this year. Toyota teamed up with Subaru to launch the bZ4X, a battery electric vehicle (BEV) which will start shipping to U.S dealerships next month. This is part of Toyota’s big push to join competition in hopping on the BEV bandwagon.

Toyota Motor Corporation earmarked $35 billion to launch thirty new BEV models across its Toyota and Lexus brands by the end of the decade. It plans to be selling 3.5 million BEVs annually by 2035. The company recently announced its first North American battery production plant in North Carolina, which will have the capacity to produce batteries for 800,000 vehicles annually.

Toyota will spend an additional $35 billion on developing its hybrid and plug-in hybrid electric vehicle (PHEV) business. Toyota sold more than half a million hybrids and PHEVs last year.

Hyundai is no newcomer to the EV market. Last year, the company sold more than 120,000 fully electric cars worldwide. While its U.S electric sales in 2021 were negligibly small, it has already delivered thousands of EVs to U.S dealerships since the beginning of this year. And like many of its competitors, the company has lofty ambitions to ramp up its electrification.

Hyundai recently announced a $15 billion effort to capture 7% of the global EV market by 2030. The Korean automaker plans to boost production of BEVs and introduce 17 new electric models across its Hyundai and Genesis brands. The company will start producing EVs in the U.S and it has already launched an EV manufacturing plant in Indonesia, tapping into the latter’s rich mineral reserves for its batteries.

Meanwhile, Hyundai’s most popular EV, Ioniq 5, won the top award in the 2022 World Car Awards. U.S customers can nab the compact SUV for $43,650, which is 10% less than what they’ll have to pay for Tesla’s most affordable car (which happens to be a sedan).

Rivian and Tesla better watch their backs as Ford releases its F-150 Lighting truck this spring. The company decided to electrify its best-selling pickup truck and ask less than $40,000 for the base version. That is a bargain compared to Rivian’s R1T pickup that goes for at least $67,500 and is also due to ship to customers sometime this year. The F-150 Lighting is priced similar to Tesla’s Cybertruck, but so far only a prototype of that vehicle has seen the light of day. 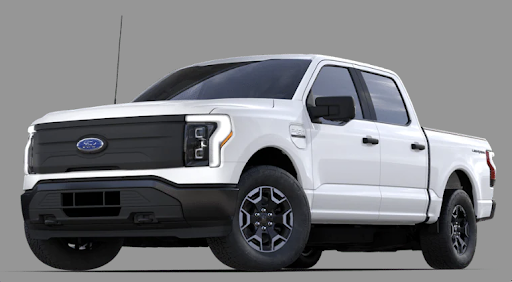 Ford Motor Company sold 27,140 of its all-electric Mustang Mach-E vehicles in 2021. It claims that this puts it in second place after Tesla in terms of U.S-based EV sales. The company recently had to shut down new orders for the model due to overwhelming demand. But more Ford EVs are hitting the market as America’s second largest car manufacturer is making massive investments to ramp up production.

Ford wants to be churning out at least two million EVs a year globally by 2026. It recently announced a boost of EV spending to $50 billion over the next four years. The company is planning to make 50% of its vehicles fully electric by 2030. It is constructing a sprawling 6-square mile factory in Tennessee to produce its electric pickup trucks and an EV battery plant in Kentucky.

Nissan started bringing cheap EVs to the mass market way before it was cool. The company debuted its all-electric Leaf model in 2010 and sold more than half a million of them in the first ten years. It is currently the cheapest EV in the U.S, with the current model year going for $27,400. Though it used to be the best selling EV in the world, the Leaf’s popularity has been faltering in recent years.

Nissan is due to supplement its Leaf offering with a new crossover SUV electric vehicle. The Nissan Ariya will start shipping by fall of this year. The company plans to add 23 new EV and PHEVs models to its offering by 2030 and has committed more than $15 billion to its electric business to be spent over the next five years. It aims for 40% of its U.S and 75% of its European sales to be electric by the end of the decade.