The ambitious, bold and hungry start their week with The Business of Business!
Crypto
5.17.22   10:25 PM Crypto

We talked to Daniel Yurcho, founder of NFT platform Nexxxt, about what he thinks crypto is in a funk.

There’s a scene from the television show Community, popularized as a meme, which could illustrate the state of the crypto markets. In the clip, Donald Glover walks into a room with a stack of pizza boxes in his hands, expecting to present them to grateful friends — only to discover abject chaos. A fire is raging out of control and a man is lying on the floor, bleeding from a gunshot wound.

Likewise, if you suddenly parachuted into crypto last week, you would have found a more or less the same tableau. Bitcoin had plunged well below $30,000. Stablecoins were showing they might be anything but “stable.” And Twitter was littered with doomsayers prognosticating yet another “crypto winter.” 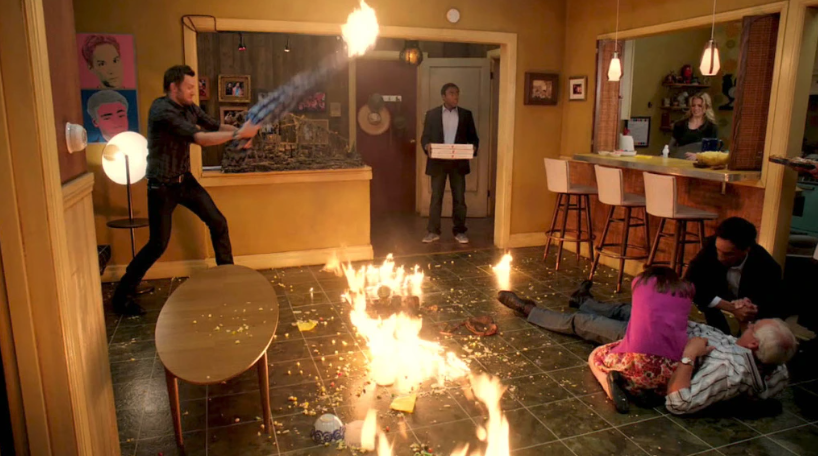 Donald Glover's character walking into a chaotic scene in the television show Community.

It wasn’t supposed to be this way. Volatility is par for the course in crypto. But the market and its wild gyrations were expected to at least march to their own drum, and not be in lockstep with the stock market and broader economy. Yet that is exactly what is happening apparently.

According to The Wall Street Journal, crypto is now more closely correlated with the stock market than ever before. The newspaper reported yesterday that bitcoin and ether and major stock market indexes are moving almost in lockstep with each other — which wasn’t true a year ago. Yikes.

What gives? We talked to Daniel Yurcho, a blockchain entrepreneur with deep roots in the crypto industry, about what he thinks is going on. Yurcho is the founder of Nexxxt, a soon-to-launch adult content NFT platform. (Adult content is one area where crypto offers a lot of benefits to creators, who often get hassled through traditional financial and media platforms.)

Yurcho candidly offered his thoughts on what is happening in the market, and how a recovery could start to take shape.

Daniel Yurcho: Yes and no. It hasn't quite launched yet. It will be in about the next month or so. It is going to be an NFT platform for all types of adult content. So we brought in artwork, all the way to pornography. It will be tokenized and sold and collected on the site.

Interesting. Is there anybody doing something like this now?

There are a couple of platforms that are doing it. I've seen them. And I've never been in the adult industry before. But about a year ago, during the real NFT boom, I noticed that nobody who was doing NFTs and adult content was really doing it the right way and building  a trustful and transparent kind of marketplace and community. So I kind of saw that as a really big opportunity to build my own platform. And that's really been my focus with more ethical sharing of profits to creators and just kind of a better community and ecosystem for that.

I want to ask you a little bit more about that. Because I have heard an awful lot about adult content creators getting hassled. What made you interested in this? And why do you think NFTs are the way to do it?

I just knew historically, they were kind of a very subjugated group. And the more studying I did, especially into the people who are in the porn community, [I learned] the revenue share certainly does not work in their favor. So I see NFTs as a way for them to take back their digital content, which controls so much of the internet today. And keep a lot out of the profits out of the hands of people who don't actually create the content. I viewed this technology as a real means to generate more revenue. It’s kind of the way I saw Web3 going.

Where are you at as far as progress in this startup?

We're very close. My developers are Ukrainian. So that has been, of course, a whole challenge, making sure they're safe. And they're in a region where they could continue to develop and work on the project. It’s more that they’re concerned for their families and getting them to safety.

And right now we're just working on getting things audited and making sure our smart contracts are secure. So I don't run into any of those issues that you hear about in the community where a smart contract gets hacked, and people lose all their funds. And I definitely don't want to be a headline for that reason. I want to be a positive role model for people.  But definitely in the next month or so. I would say June would be the ideal timeline.

It's good that your developers are staying safe. I'm sure that must be scary. Yes. So Oh, yeah. And also, please, can you tell us about your background, especially as it relates to crypto?

I've been involved in crypto as an investor for about six years. But I got further and further into it. And then with CryptoKitties and NFTs, I started to really pick up on that technology. So I decided to kind of have the side gig and start a consulting business. It’s called Consult Web3, where I was able to just kind of help startups and other companies who were looking to start their own NFT projects.

About a year ago, I noticed that there was kind of a lag in the market with adult content. And so I decided to just go ahead and dive in and build my own platform there.

So, switching topics a bit: We know over the past week, crypto has been on fire, in a bad way. What really happened and started this, in your opinion?

In the past week, there was definitely a decrease in the stock market, inflation fears, and then the whole Luna fiasco. That’s why we saw that initial massive dip, and then a slight recovery in the last two days. But I think it's definitely attributed to general uncertainty with the war in Ukraine at the moment, and rising inflation and just how long that'll go on. Coupled with that, Luna crashing down and losing all its value, and general skepticism about stablecoins, and that bringing down the industry as a whole.

Yeah, I was gonna ask you about that, too. I kind of glossed over a bit so far, what happened with Terra and Luna. Stablecoins, in the name, are supposed to be stable. And the fact that this, this, this mess, kind of seems to create a lot of uncertainty overall. Explain what happened with Tara and Luna, and how that impacted the market.

Stablecoins in general, they're supposed to be pegged to the dollar and potentially hold $1. As of late, and through audits and everything, you can see that through their reserves, they definitely don't do that. So they do so by algorithms. And then not actually holding these funds, kind of leaves some vulnerabilities within their system.

So as far as I know, what the Luna or Terra situation was, they had these vulnerabilities that people had warned about for some time, either in their code or in their practices. And those were exposed, leading to  the decoupling of the coin with the dollar. And that just led to everything crashing down. And because like you said, it's supposed to be a stable coin. And once people notice that it's really not that stable, that's when liquidation can begin.

Do you think the damage can be contained?  Are other stable coins safer?

Tether is a really big one that I see that sometimes goes as low as 95 cents, which is not good for a stablecoin to be doing that. If another one were to follow suit, that would be one that would be very detrimental.

That makes sense. What do you see as the long term implications of the events of this past week going forward for crypto?

Well, I definitely see crypto just kind of staying in tune with the stock market. This could mean more bearish sentiment moving forward, but it's definitely because of global situations. I think the longer inflation goes on, the bigger the opportunity for crypto to kind of decouple itself from the stock market and VC.

"Well, I definitely see crypto just kind of staying in tune with the stock market. That could meann more bearish sentiment moving forward."

So if there's long term widespread inflation, in the country and around the globe, I think it could start to be seen as a hedge against that. But in general, this could just enter into a more bearish sentiment or kind of a fluctuation around where we sit now. I don't think it'll return to a bullish kind of market for quite some time at the moment.

That's really interesting, because it kind of seems like, you know, we're still figuring out what the fundamentals are and the dynamics are in the market. There's also a lot going on with regulations and crypto. Do you see there being any potential regulatory fixes to this situation in the future?

The Treasury Secretary Janet Yellen has definitely talked about regulating stablecoins more. So that regulation will definitely help in making sure that the market is a safer place for consumers to enter. Your average person would have no idea getting involved in Luna, that they could lose all their funds in a matter of 48 hours.

So regulation to the market as a whole, I think is going to be very welcome. The way this administration is approaching it is a pretty welcome approach. As far as crypto goes. And globally, you see other countries starting to take it seriously.