The ambitious, bold and hungry start their week with The Business of Business!
Features
4.18.22   9:21 PM Features

Who will win the war in Ukraine? Economically, it could be SpaceX, Blue Origin and Exxon

We look at the companies and industries around the world that are poised to reap surprise gains from the upheaval.

War is hell, and the situation in Ukraine is no exception.

Aside from casualties and deaths, the conflict has wreaked untold havoc on both the Ukrainian and Russian economies — both because of ongoing violence and turmoil in Ukraine and because of steep sanctions levied against Russia. And global supply chains have been upended, with negative economic reverberations felt around the world.

At the same time, wartime upheaval and changing political realities are creating new business opportunities. They arise from supply gaps in Russian and global markets, as well as the mass movement of highly skilled professionals across borders.

We took a look at what companies and industries are affected by the dynamics set in motion by Russia’s decision to go to war. Here are the players who stand to benefit by virtue of their position in the marketplace.

Russia’s space agency Roscosmos is already starting to lose some of its lucrative international deals, and that will help U.S companies widen their lead in the space race.

Before the conflict, national space programs and private companies alike relied on Russia’s Soyuz spacecraft to ferry astronauts and cargo to orbit. According to its chief Dmitry Rogozin, Roscosmos brought in $4.5 billion in revenues in 2020. The damage from U.S sanctions against the Russian space program and new political realities have already compelled international clients to turn elsewhere for their spacefaring needs.

SpaceX was Roscosmos’ most formidable competitor before the war, and it is now reaping rewards from Russia’s hostile policies. Elon Musk’s company recently won a contract with UK internet service provider OneWeb to launch its satellites into orbit after the latter axed its deal for launches from the Russian spaceport Baikonur. The decision was made after Roscosmos said it would not work with OneWeb unless the company refuses British government funding.

Roscosmos’ gifts to the U.S private space sector didn’t end there. Russia announced it will stop supplying engines for U.S rockets, which will give some thrust to U.S-based rocket engine manufacturers. Among them is Jeff Bezos’ Blue Origin, which is due to deliver an engine for the Vulcan rocket developed by ULA, a joint venture between Boeing and Lockheed Martin. ULA previously relied on Russian engines to send its product into space. Other domestic rocket engine producers like SpaceX and Rocket Lab may also see increased demand for their services.

Rogozin also suggested that Roscosmos may withdraw from the International Space Station , a joint venture between space agencies in Russia, U.S, Canada, EU, and Japan. When he took to Twitter to pose the rhetorical question of who if not Russia will save the ISS from falling to earth, his rival from across the pond had a response ready.

Though it is unlikely to happen in the immediate future, U.S company Northrop Grumman would also benefit from Russia’s departure from the ISS. The company recently launched the Cygnus cargo freighter to the ISS, which has the capacity to replace some of the propulsion power that Roscosmos currently supplies to the station. 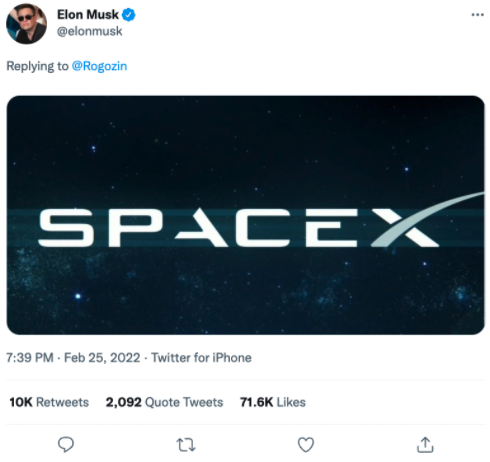 While Russians are still flying to space, direct flights from Russia to Europe have ceased. As the EU and UK closed their airspace to Russian aircraft following the invasion, Turkey has become an important stopover point for Russians trying to reach European cities. And the country’s flag carrier, Turkish Airlines may emerge as a winner, at least in the long term.

Balkan Insight reports that Russia-Turkey flights have seen lower passenger volumes and have faced higher operating costs since the start of the war. But this may be a temporary effect of the initial economic shock. The national carrier has been completing a similar number of flights to Russia as it had before the war. And the Turkish government is hoping to add 3 million passenger seats between the two countries. It has earmarked $300 million for the creation of a charter airline devoted solely to transporting Russian tourists.

Though it may take a while for tourist traffic to rebound (and it may never reach pre-war levels), Turkish Airlines could profit from a ramp up of Russian transit passenger volumes. It could also benefit from an increase in air cargo shipments, as it continues to serve as the Russia-Europe link of last resort.

Russia is the second largest crude oil exporter in the world and the largest supplier of natural gas. Any event that threatens its ability to ship its fossil fuel riches to global markets spells good news for the rest of the world’s oil producers.

At its peak price in the weeks following the invasion, a barrel of Brent crude oil was going for almost $128 a barrel, over a third above its price on the eve of the war.

Though some oil companies are facing losses after ditching their Russian operations, many, including BP and Exxon Mobil have seen their valuations rise. The Dow Jones U.S Oil and Gas Index, which tracks the stock prices of companies in the energy sector, is up by almost 19% since its pre-war level.

Meanwhile, U.S energy producers aren’t the only ones profiting from the crisis. The U.S banned Russian oil and gas imports in March, creating an energy supply void in its domestic market. For some oil producers that have been snubbed by the U.S for political reasons, this might be an opportunity to make a comeback.

Days before the ban was announced, U.S officials visited Caracas to discuss potentially lifting a ban on Venezuelan oil imports. Iran also expressed hope for an easing of sanctions, promising in exchange to help boost the world’s oil supply.

IT firms in other post-Soviet countries

The start of the war and the rapid ramp up of authoritarianism in Russia has caused a large exodus of people from the country. A large portion of those leaving the country are highly skilled workers that form the backbone of Russia’s creative economy.

Around 70,000 IT professionals are estimated to have emigrated last month and as many as 100,000 more are expected to depart in April. While this is a huge loss for Russia, it is a welcome infusion of human capital into the economies of the destination countries.

Many Russians are headed for other post-Soviet countries, with Georgia and Arrmenia in particular emerging as prominent émigré hubs. While some of the arriving Russians are planning to move on to other destinations in Europe and beyond, many are looking to settle in the two countries. And there is no doubt that an influx of some of Russia’s brightest and most ambitious young professionals will benefit their innovation ecosystems.

Russian businesses, as well as some Ukrainian ones, are also relocating to Tbilisi and Yerevan.

Armenia's economy minister, Vahan Kerobian, said that his country is willing to help companies transfer their operations. Georgia is also welcoming international companies that have ceased operating in Russia, and its economy ministry has set up a working group to facilitate the transition.

Among the recent transplants is the blockchain software development company MetaLamp, which hastily relocated from Tomsk to Tbilisi shortly after the invasion. Its CEO Roman Shtykh cited the relative ease of registering a business in Georgia, low taxes, and favorable regulations for working with foreign clients as the reasons for choosing the country.

While it's unlikely that the Caucasus will be the next Silicon Valley, we are bound to see some venture capital flowing into the region.