The ambitious, bold and hungry start their week with The Business of Business!
Innovation
12.17.18   5:51 PM Innovation

TaskRabbit is faltering despite IKEA acquisition and heavy promotion

Despite a lucrative IKEA acquisition and integration and some quirky content marketing, TaskRabbit is having a bad winter.

TaskRabbit ($PRIVATE:TASKRABBIT), the freelance labor online and mobile marketplace for everyday handyman and other random needs, should be having a great year. That's because it was acquired by IKEA ($PRIVATE:IKEA) in 2017 as the go-to service for furniture making, it recently launched in Canada, and it's now available in 45 cities in the United States and Britain. It also survived a massive data breach last summer.

All of that sounds good... but users are down on the service. One of the most telling recent changes is a precipitous drop in Facebook login rankings on the app.

Last spring was good for TaskRabbit app usage: it saw a jump from being ranked around 6,000 to around 3,800 by September. But since then, the app has dropped back to a more mediocre rank of just around 5,200. This likely coincided with a summer marketing campaign, as Facebook followers saw a rise around the same time.

Like its app usage rankings, likes for TaskRabbit have plateaued, seeing almost no upward movement since October.

These numbers would normally be only somewhat cautionary, but a quick look at how consumers are feeling about the company's most vital asset — its mobile app — and we see a real problem here. 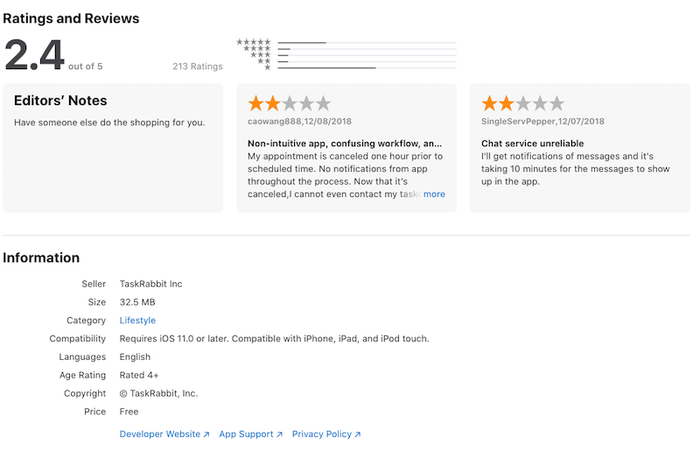 For a service that bills itself as problem-solving and simple, its app is riddled with usability issues, poor customer support options, and general malaise.

Complains range from simple app functionality issues to poor follow-up and service from Taskers (those who do the actual work). Other poor reviews stem from mistrust after the large data breach that exposed personal data for 3.75 million users last June.

Whatever the issue, it seems people aren't so into TaskRabbit right now. Its latest efforts appear to be some heavy sponsored content promotions aimed at millennials, as illustrated in this curiously gushing Business Insider piece: 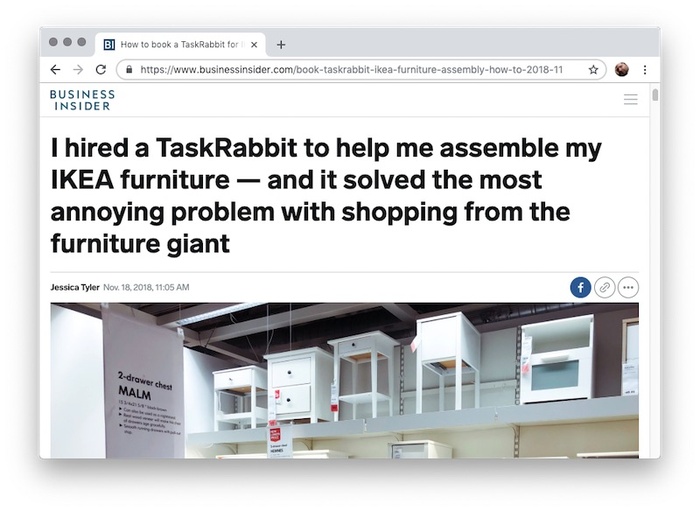 The article, titled "I hired a TaskRabbit to help me assemble my IKEA furniture — and it solved the most annoying problem with shopping from the furniture giant" isn't listed as sponsored content despite appeared to be nothing more than a step-by-step "how to use TaskRabbit for IKEA" instruction manual.

While the IKEA acquisition and partnership should be great for TaskRabbit, the furniture giant has serious problems of its own right now. It recently announced  massive layoffs and is now dealing with sinking employee morale.