The ambitious, bold and hungry start their week with The Business of Business!
Crypto
4.13.22   1:37 PM Crypto

Ukraine wanted to reward its crypto donors by airdropping tokens, but it canceled the effort and turned to NFTs instead. We found a DAO expert to walk you through what it all means.

Days after Russian forces entered Ukraine, the country’s official Twitter account had become a major conduit of information about the invasion. But it was also something more: the account became the launching point for fundraising crypto to help the nation repel the invasion.

This meant Ukraine’s government started engaging with the vocal crypto community on Twitter and even adopted crypto-native fundraising tactics. On March 2, Ukraine’s official twitter account posted: “Airdrop confirmed” then gave details about a planned “snapshot” to come the following day.

This might appear to be gibberish to many people, but for crypto Twitter, this showed that Ukraine was using some of the DAO world’s most established mechanisms for launching a token — mechanisms with the potential to raise funds for the country while also enriching donors.

Ukraine’s airdrop attempt and the subsequent cancellation gives us a glimpse into the tactics that fuel DeFi, DAOs and NFTs today. We talked to an expert on all three who has worked with some of the most successful DAOs in the space to get a sense of what the Ukrainians could have done or done differently in adopting crypto norms. 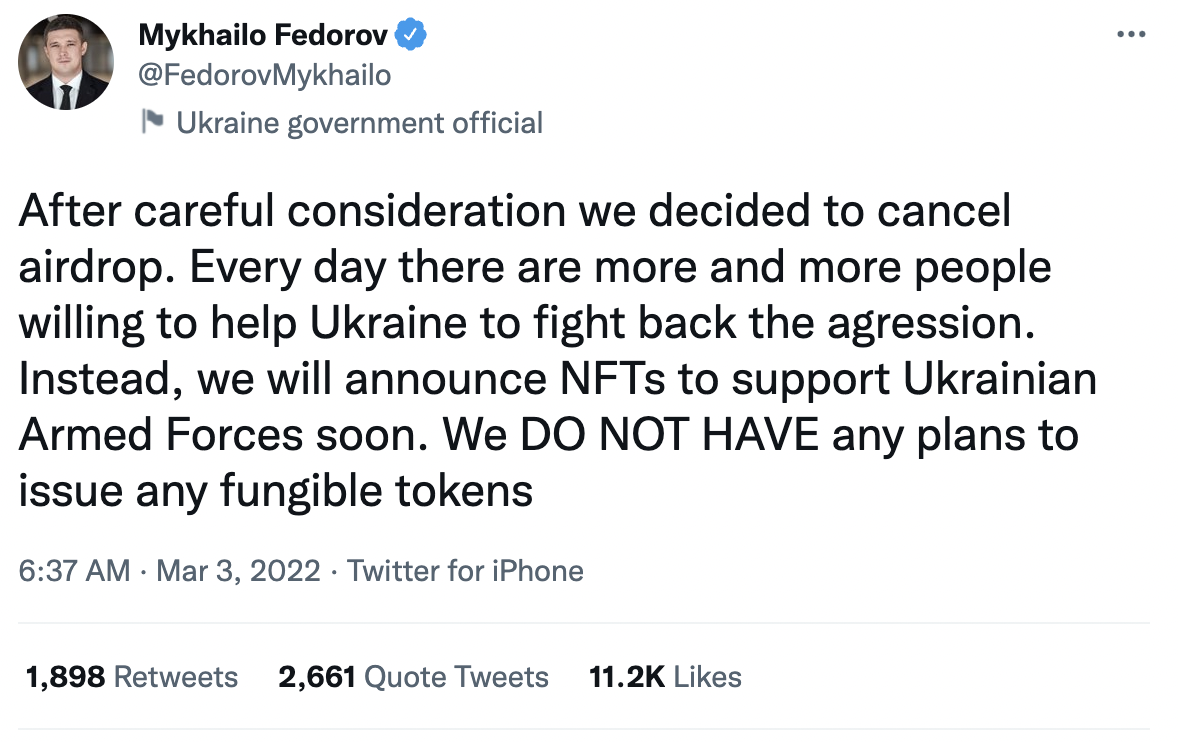 That expert is James Waugh, a 20-something New Zealander who is part of a group called 🔥_🔥 (pronounced Fire Eyes DAO, and hereafter referred to as such). You can think of Fire Eyes DAO as a sort of McKinsey for crypto. It’s worked with some of the most successful protocols and communities out there, helping them shape economics, governance, culture and more.

Fire Eyes was born in the summer of 2020, a period known in the crypto community as the DeFi summer. It was the moment when decentralized finance projects finally found the fabled product-market fit. Suddenly people could lend, borrow, and earn yields on crypto tokens, not to mention use those tokens to vote on how projects should develop. Things happened quickly. At its peak, last November, DeFi projects held $110 billion in value, according to DeFi Pulse,  compared to about $10 billion in asset value held by DeFi projects in the summer of 2020.

But, of course, it’s not really like McKinsey at all, since it’s a crypto thing. Waugh, who I first met years ago at a conference in Osaka, Zoomed with me from Sun Valley where he was skiing with friends before heading to Amsterdam for a month or so to take part in an Ethereum hackathon.

I asked him to break down what Ukraine’s tweet meant and what happened next.

Airdrops are one mechanism that crypto projects use to incentivize users to take part. It’s essentially a way to give money away. Some airdrops involve a lot of money: like the $75,000 one 25-year-old Bored Ape holder received when that project issued ApeCoin.

In Ukraine’s case, Waugh says tweeting about an airdrop was a savvy move.

“Someone on their team has a bit of crypto context, and this is the play, you know? They’re just talking about an airdrop and the donations went straight up,” he said.

Indeed, $4 million poured into Ukraine’s Ethereum wallet the day after the airdrop tweet went out.

A snapshot is simply the point in time that a project uses to reference who gets the airdrop. In the case of Ukraine’s planned airdrop, the snapshot would have taken place on March 3, meaning users still had time to donate in order to be part of the airdrop. This explains the rush to donate after the Ukraine account tweeted about an airdrop.

“If they were going to do a snapshot, what that would mean is that a token would be distributed. On the back of that snapshot, all the people who contributed, we get a proportional share of that token,” Waugh explains.

Whatever amount donors were set to get, a token is only as valuable as its utility (or at least, the perception of its utility). Ukraine never announced any plans for a token beyond a possible airdrop, so I asked Waugh to sketch out the possible routes a token designer could take.

Waugh explains there are two basic paths for a project doling out a token to take: extract as much financial value as possible, which he doesn’t recommend, or optimize for social impact.

With the first route, the model looks more like a Kickstarter or other crowdfunding campaign. The project is selling the token for the express purpose of raising capital. One high-profile example of this is ConstitutionDAO, which raised tens of millions in hopes of purchasing a copy of the U.S. constitution. “That token ended up going through the roof,” Waugh says. “I imagine something similar could end up happening [with a Ukraine token] just because of the name.”

With the second route, the idea is to hit some non-financial goal such as awareness of a donation campaign. The project could use a mechanism that incentivizes distribution of more tokens, perhaps by allocating a percentage of airdropped tokens to be given away by each holder, Waugh says. “If I get 100 tokens, maybe 10 tokens aren’t actually mine, but I’m able to send them out for free,” he says. “You’re really trying to spread that and grow the number of people holding it.”

It’s not all fun and games in DAO land. Danger abounds from hacks, scams and “rug pulls.” The term rug pull refers to straight up fraud, when investors are duped into putting money in under false pretenses.

Though some on Twitter were quick to accuse Ukraine of a rug pull for canceling its planned airdrop, it appears the government was more a fraud victim than a perpetrator (and let’s keep in mind that it’s also busy fighting a war).

After the tweet went out, scammers issued a token, called WORLD, and “spoofed” it so that it looked like Ukraine’s Ethereum address was starting the airdrop. At the same time, the WORLD token was listed on decentralized exchanges. The idea behind the scam was to pump WORLD and then dump it. After the spoof, Ukraine announced it was canceling its airdrop, switching instead to an NFT fundraiser.

For Waugh, the important underlying issue is that the point of DAOs is to coordinate people on the internet on a global scale.

“It shows the power of a DAO, right? When a big event in the real world happens, a lot of people scramble to make these communities and make some meaningful stuff happen,” he says.

He points to the fact that DAOs raising funds for Ukraine, like UkraineDAO led by Pussy Riot member Nadya Tolokonnikova were established in days, with thousands of members taking part in discussions and donating funds.

And he believes the fact that the government of Ukraine was even contemplating using tried-and-true DAO tactics shows how far the technology has come in a few years.

“I remember being at one of the last pre-Covid [crypto] events in Berlin, and we were saying, it’s going to be so funny when we walk down the street and hear random people talk about DAOs, right?” Waugh says. “And then we were at the beach the other day and random people sitting next to us were talking about DAOs!”