The ambitious, bold and hungry start their week with The Business of Business!
Crypto
3.11.22   6:27 PM Crypto

OPINION: Crypto is more a force for good than harm in Ukraine

Humanitarian donations are pouring in, and so far the threat of Russia evading sanctions has yet to materialize.

If you were on Twitter on Feb 26, you might have seen something unprecedented happen: a country under attack was asking for donations in cryptocurrency.

What’s more, because Ukraine published its addresses publicly, anyone could look them up and see the transactions taking place with them in real-time. Anyone watching Ukraine’s address would have seen the donations rolling in, as they were added to the Ethereum blockchain. For instance, it looks like the first Ethereum donation to Ukraine’s wallet sent 0.014 ETH, worth $39.18 at the time, to Ukraine about 25 minutes after the tweet. Here’s the transaction. There was another donation of 0.014 ETH a minute later, and then 0.2 ETH, and so on. By the end of the day, the address would hold nearly $4 million worth of Ether. 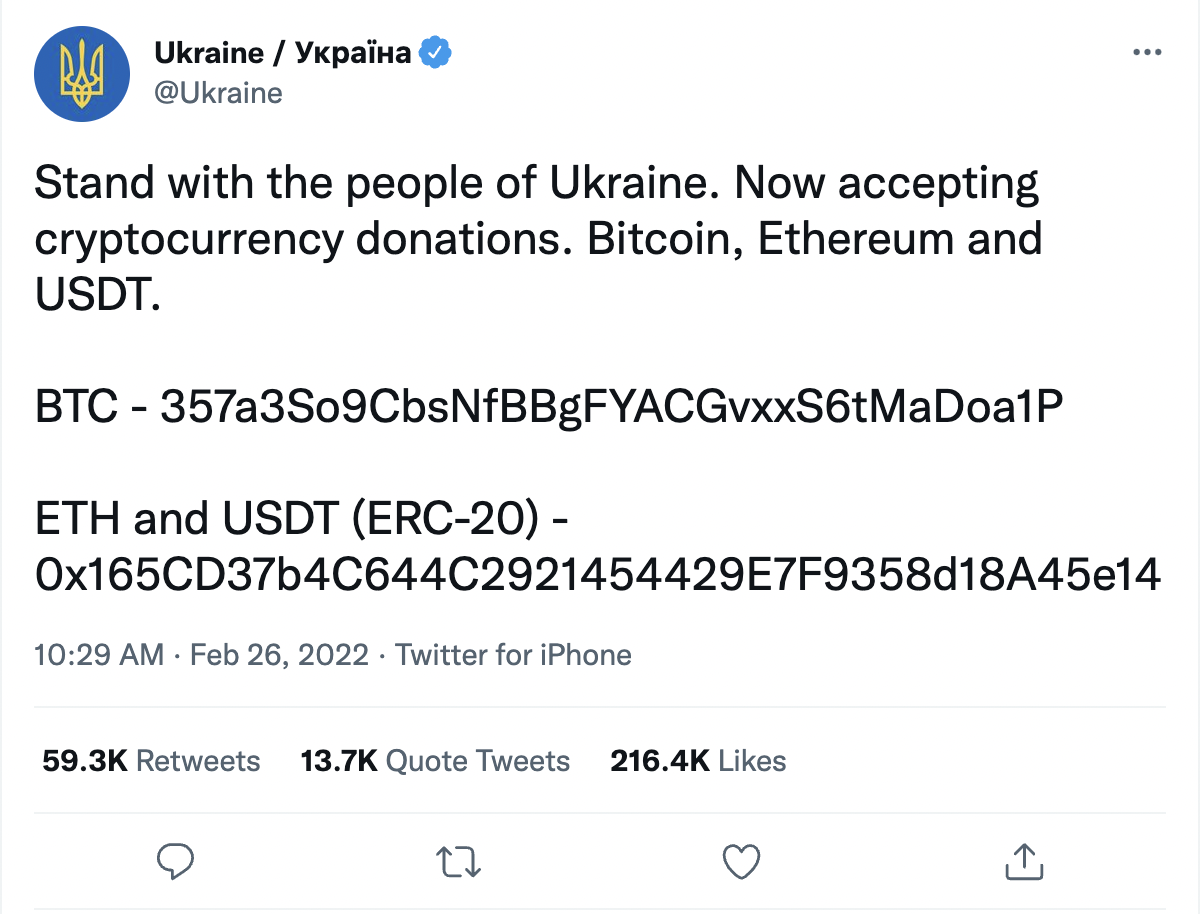 Crypto advocates have long insisted that the technology can be used by good—and bad—actors in equal measure. The war in Ukraine is vividly demonstrating the case.

As the war began and the world’s wealthy nations leveled financial sanctions against Russian President Vladimir Putin and his regime, there was much talk of cryptocurrencies being used to evade the sanctions. But a permissionless and largely unregulated technology can work both ways: If it can evade sanctions, it can also penetrate the fog of war with donations. And, on balance, it looks like crypto is doing more good than harm in this conflict.

It’s not that crypto can’t be used to help states evade sanctions. After all, the whole point of crypto is the ability to transact outside the traditional financial and banking system. There’s evidence to suggest crypto has already been used to do just that. From Bitcoin mining in Iran to ransomware hackers in Russia, blockchain tracing firms have found some $1.5 billion worth of money flowing into sanctioned countries thanks to some use of cryptocurrencies.

Even that most worthy of crypto uses, the central bank digital currency – so often the fodder for innovation conferences and marketing campaigns – serves as another potential sanctions evasion mechanism. Russian central bank officials have said that developing a digital ruble could make the country more resilient to sanctions, according to the New York Times. The World Bank found that Russia could likely find partners, like China, who would adopt the coin and facilitate trade unaffected by U.S. restrictions.

But there’s another side to crypto’s potential to work outside established systems, and that’s its ability to enable global, low-friction, coordination. That coordination is in turn highly effective for raising donations across borders, as The Business of Business recently reported.

The crypto world has coordinated a number of DAOs and other initiatives, like mesh internet projects, and raised well over $10 million in a matter of hours for the Ukraine government and non-governmental organizations (the figure stands at over $50 million a week later).

Meanwhile, the radical transparency offered by a ledger that records all transactions publicly actually makes crypto rather difficult for sanctioned Russian oligarchs to use. Tigran Gambaryan, a vice president of intelligence and investigations at Binance, told Politico that this transparency is precisely why crypto is “a terrible thing to use to evade sanctions.” The ease of analyzing blockchain transactions and the amount of attention on sanctioned individuals means other means, including the traditional financial system, might be preferred by those trying to skirt sanctions.

Even FinCEN, the U.S. agency in charge of policing financial crimes, says crypto and sanctions evasion don’t mix very well. The agency said on March 7 that cryptocurrencies have not been used for “widespread evasion” of sanctions, although it nevertheless urged members of the industry to remain vigilant of suspicious activity.

Despite crypto’s checkered reputation in some circles, the share of illicit activity using cryptocurrencies has dropped to an all-time low of just 0.15% of all transactions last year, according to the blockchain tracing firm Chainalysis. To be clear, that’s still some $14 billion worth of illicit transactions, but the growth of crypto itself has far outpaced that amount.

Some experts say it’s unlikely that Russian oligarchs will use crypto to evade sanctions because it’s simply too small. Over $40 billion in foreign exchange transactions was processed daily by Russian banks compared to the $400 million collected by Russian hackers using crypto in a year, according to the Washington Post.

In a stranger twist, crypto might even be more effective at enforcing sanctions, and even widening them. Ukrainian officials have been trying to tighten the sanctions net around Russian users in crypto channels. Nonetheless, Ukraine’s vice president has tried to crowdsource crypto wallet addresses linked to the Putin regime, and has asked exchanges to bar Russian users (so far unsuccessfully).

In assessing crypto’s role – and its potential – in the midst of this conflict, it’s worth considering theorist Paul Virilio’s notion of the “original accident”, where the invention of any technology also births the potential for accidents caused by that technology. To paraphrase Virilio, the invention of the jet engine also invented the plane crash.

In the case of the first war whose participants wielded cryptocurrencies and other financial technologies as weapons, the potential for much good to be done with this new invention is vast, but so is the potential for accidents. So far, though, the blockchain’s transparency has made it more difficult for illicit actors to use it in the shadows.