The ambitious, bold and hungry start their week with The Business of Business!
Innovation
6.26.19   3:19 PM Innovation

Wish.com has the alternative data every online retailer wishes they had

Explosive growth, continued hiring and social stats to make the biggest retailers in the world envious. Is there anything Wish.com can't overcome?

Wish.com ($PRIVATE:WISH) is crushing it.

The social-friendly, bargain-basement app that allows shoppers to participate in the equivalent of a digital flash sale is getting more attention from users, hiring more people - and although there are no reports to confirm it - certainly looks like a great candidate for an IPO in a white-hot marketplace. It's reportedly turned down multiple M&A offers, on the way to a valuation of $8.5 billion when it last raised capital in 2017. Past backers include investors like DST Global and Temasek.

Wishing for a Bigger Team

Wish.com has grown, and continues to do so. Our first chart maps out its steady increase in headcount, as tracked by LinkedIn ($MSFT) Employee Headcount - since 2018, headcount has risen more than 50% to 841, as of late June.

Our second chart tracks Wish.com job postings. And, again, it reflects that the company remains in growth mode - postings up more than 75% this year alone. Since launching in 2010, it has built out new apps like Geek, Cute, Mama, Home Design & Décor and Local - so the staff expansion and the growth in job postings matches Wish's expanding scale.

The next chart is fairly impressive for a startup with less than 10 years of history behind it, going up against well-known brands that can blow millions on holiday ad campaigns to lure hundreds of thousands of shoppers through their doors.

How can Wish do it? The company operates its flash sales across social platforms - so it can advertise on Facebook, make and complete a sale, and allow the user convenience to the point they barely even have to open another browser. It then makes sense that Wish's Talking About Count crushed competitors on social, but the next question is: in the long run, can it crush them on revenue?

Yes, is the short answer to our last question. Wish's web traffic has grown at an explosive rate - for a company that's wholly dependent on e-commerce as a business model, this is crucial - and traffic to Wish has only recently begun to ebb. Our data was interrupted in February 2019, but so far the trend is very solid for a private company. 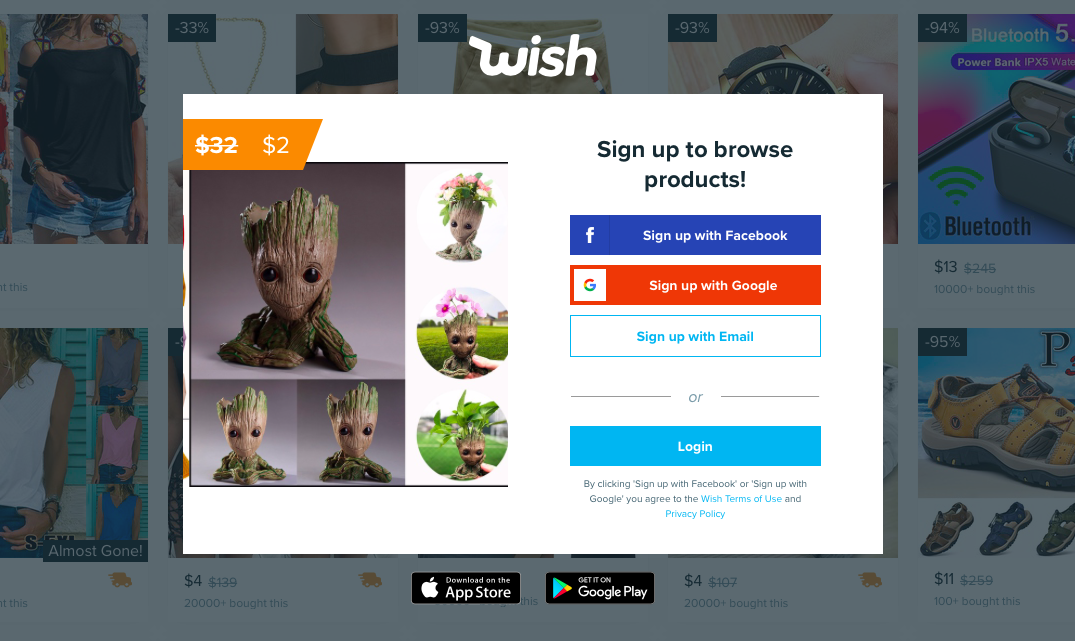 What could slow Wish's roll? The same thing else that's on the mind of other leading executives from technology firms to toy makers: tariffs. Wish.com, according to a 2017 Forbes report, can offer consumer cut-rate prices by shipping direct from manufacturers in China. If that becomes increasingly expensive for Wish, it will for the company's customers - so Wish's wish this weekend, is probably for a fast and effective agreement to and the continuing US-China trade war.