The ambitious, bold and hungry start their week with The Business of Business!
Innovation
6.10.21   4:11 PM Innovation

The venture capitalist said “the future” for founders is being more judicious in handing out equity.

When a person who launched Reddit 16 years ago declares a new thing is “the future,” it’s probably worth paying attention.

“This is gonna be the future of the cap table in startups,” tweeted Ohanian, who also co-founded Initialized Capital. “I’m already seeing smart CEOs think this way. Software is making it all viable and more talent than ever [is] available (and motivated) to advise and add real value.”

The issue may appear obscure at first, but disorderly cap tables — with equity stakes distributed seemingly at random — can cause serious headaches and heartaches for founders who need venture capital to grow their companies.

In particular, drawing in advisors during the early stages of the process, often vital to figuring out how to be a business and create a product that fits the marketplace, can be the exact noose that strangles their second stage, when companies need stronger financial backing. If they see big clumps of “dead equity” allocated to friends, mentors or consultants, VC’s often take a pass on investing.

Douglas Abrams, a VC, likened the situation to “Stockholm syndrome” in cases where founders are talked into giving substantial shares to their advisors.

“When we tell them that their advisor’s huge equity stake is way off the market and makes them not investable, they argue on his behalf about how helpful he has been to the company so far and how he deserves his huge equity stake,” Abrams, the founder and CEO of Expara, wrote in Tech in Asia.

Cabal is one of a growing number of solution providers focused on helping founders keep cap tables “clean.” Others include Carta, Capshare, Pulley and Gust. Going one step further, Cabal also promises to help founders leverage their networks more effectively, and distribute equity to advisors based more closely on the value they actually provide.

As an example, the company tweeted that instead of allocating a 1.5 percent stake to four advisors who offer “sporadic and infrequent engagement,” a startup could set aside the same stake and get “regular, impactful collaborations” from 168 advisors. 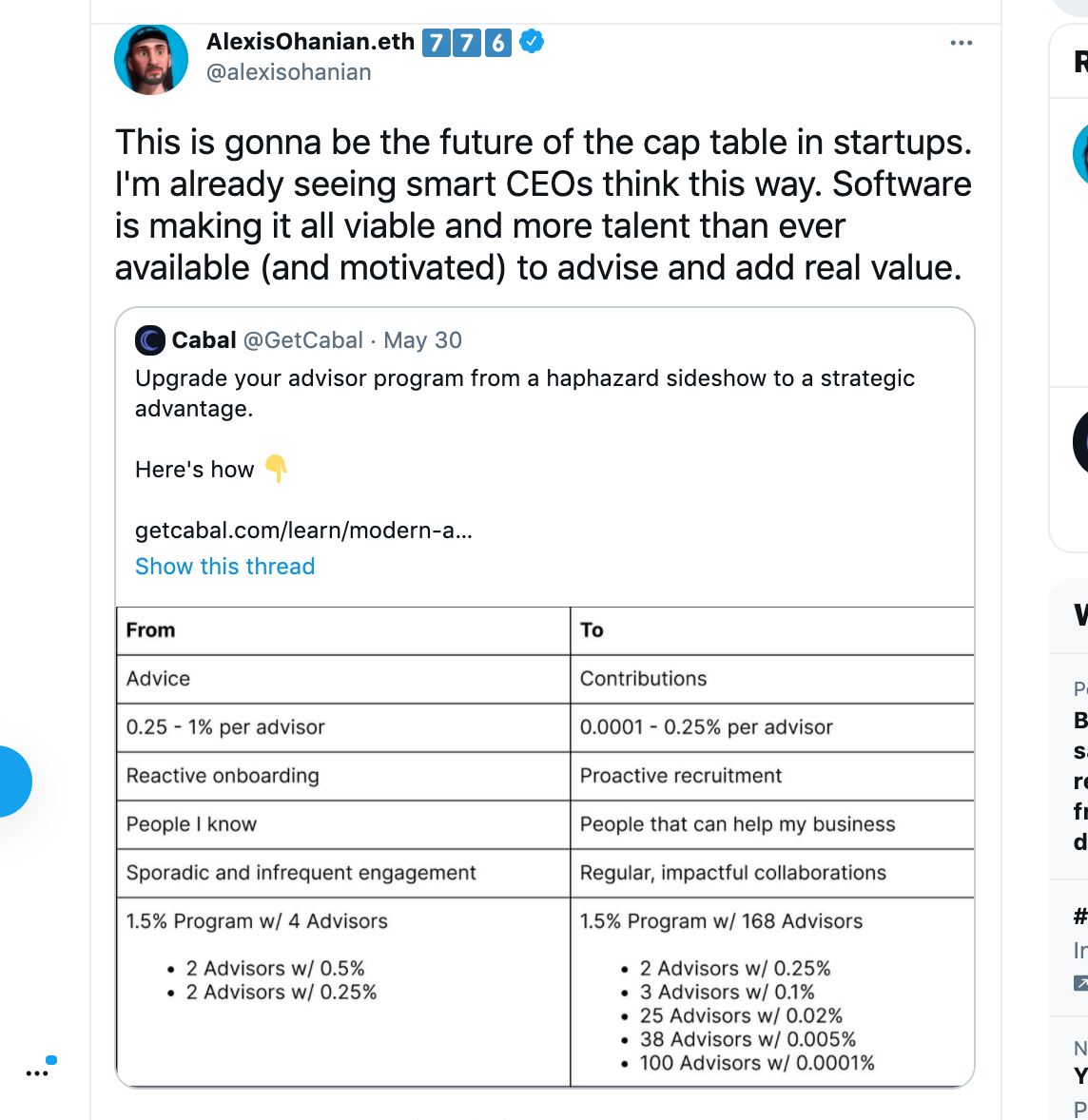 “I’m all in on this. Investor/Advisor role will become the norm. People that can actually help in tangible ways (rather than just claim they can),” commented Sahil Bloom, a vice president at private equity firm Altamont Capital Partners.

Galina Antova, founder of cybersecurity firm Claroty, chimed in: “So true! It’s all about hands on contributions and active engagement! Seeing the same trend.”

Not everyone is sold on the idea of cutting down advisor stakes to an absolute minimum, though. After another user tweeted “who’s giving 1% to an advisor,” Australian entrepreneur Simon Quirk replied: “Depending on what they deliver and what stage you are at, why would they advise for less? I am talking pre-rev very early, if it’s using decent time and their IP they could be better off risk adjusted spending time elsewhere.”