The ambitious, bold and hungry start their week with The Business of Business!
Innovation
2.23.22   11:23 PM Innovation

Who’s winning the quantum computing race? China and the U.S. are neck and neck

We looked at four different dimensions to assess how the two technology rivals stack up.

If you can barely wrap your head around the basic functioning of a PC (as is my situation), then prepare to be even more confused by quantum computers. Luckily, you don’t need a physics doctorate to get how they will likely change the world.

Quantum computing applies the properties of quantum (also known as subatomic) particles to solve computation problems more efficiently than traditional computers. The extra computational power it unleashes could be a game changer for companies running simulations of biochemical reactions for drug discovery or modeling scenarios for investment portfolios. Meanwhile, quantum communication allows for the transmission of classified information in a virtually unhackable way. It can also be weaponized to decrypt messages transmitted with traditional encryption methods.

The discipline of quantum computing has existed as an offshoot of quantum theory since the 1980’s. Superposition or the ability of a quantum particle to take multiple values at once underpins the functioning of a quantum computer. Unlike traditional computers that run on bits that take the value of either 0 or 1, quantum computers use qubits (short for quantum bits), which can be equal to both values at once. This makes them exponentially more powerful than computing devices that run on regular bits, capable of solving certain problems that are out of reach even for the mightiest Stanford-built supercomputer.

Given the possibilities, it’s not hard to appreciate why countries are in a race to conquer this new technology. The competition is especially heated between the U.S. and China. We looked at the state of research in the field and its industry applications across both nations to see who may have an edge in reaching quantum supremacy.

Who’s winning the race? Well it depends what you look at.

While a number of governments and private sector entities around the world are pushing forward quantum computing innovation, the U.S and China have emerged as leaders in the field. Both countries are home to some of the foremost research institutions in quantum technology and have produced remarkable achievements in the field.

It is difficult to identify a clear winner since each country has its own strong suits and weak points. We looked at a number of metrics to compare the state of quantum computing research in the U.S and China. They included the number of patents granted, the development of the private sector ecosystem, quantum and the level of government support for the quantum computing ecosystem.

The U.S is winning the patent game with over a thousand quantum computing patents granted within its borders in the ten years preceding 2021. It is important to note that some of these patents have been filed by entities located outside the U.S. But the high number of granted patents within the U.S is an indication that the U.S is an attractive market for quantum innovation.

In the same time frame, the Chinese patent office granted less than 400 quantum computing patents. China has ho surpassed the U.S in the total number of international patents filed in 2019 and has maintained that lead into 2020. 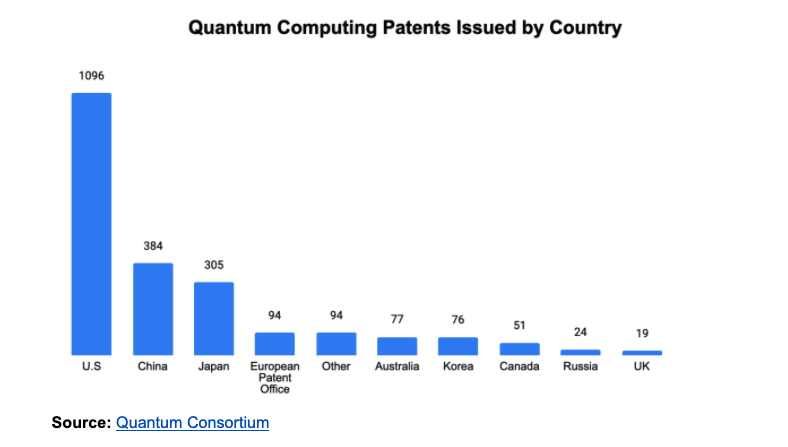 The advantage of the U.S lies in its rich private sector quantum computing research and development ecosystem, including Google, Microsoft, IBM and 12 other public companies. It is also home to 78 quantum computing startups, according to Tracxn, a website that tracks companies by industry. The U.S leads the world in quantum computing private equity, with 110 deals closed between 2016 and 2021, compared with China’s 30.

In 2019, Google was first to achieve so-called quantum supremacy, or the creation of a quantum computer that is able to solve specific problems faster than a classical computer. The landmark achievement has since been surpassed by researchers from the University of Science and Technology of China (USTC), who claim to have built two quantum computers that are more powerful than Google’s.

China is ahead of the game in quantum communications, with considerable victories in the domain. In 2016, it became the first country to launch a quantum satellite that enables extremely secure transmission of information without traditional encryption methods. It followed up on this achievement with the establishment of an integrated quantum communication network in 2019, connecting two satellites to fiber optic cables on the ground.

China’s success in quantum technology innovation can be credited to strong government support for basic research in the field. This is manifested by the fact that the universities that are responsible for China’s strides in quantum technology are all public. In its 13th five-year plan released 2016, the Chinese government named quantum communication and computing among the priority areas for the government innovation strategy. The next year, it announced a $10 billion investment in a National Laboratory For Quantum Information Sciences.

Meanwhile, the U.S government has been playing catchup with the passage of the National Quantum Initiative in 2018. The congressional act established a national strategy for quantum computing and a framework for government agencies to support research efforts, in addition to earmarking $1.2 billion in funding. The Department of Energy is using $625 million of the earmarked cash to finance five quantum information research hubs composed of national labs, universities, and companies.

While the U.S may lag behind China in terms of total government spending on quantum computing research, it has the advantage of counting a number of quantum-forward nations among its allies. It has so far made steps towards quantum collaboration with the UK, Japan, and Australia.