The ambitious, bold and hungry start their week with The Business of Business!
Innovation
2.28.19   2:51 PM Innovation

HQ by WeWork is set to expand, but WeWork already has a sizable network of medium business offices in places such as New York and London.

WeWork*** ($PRIVATE:WEWORK), the unicorn startup that has redefined the coworking industry, is looking to expand its "HQ" service that caters towards medium-sized businesses — which it says is 11 to 250 employees by definition of its HQ service — in order to grab a bigger share of the office-space market.

WeWork made its name in the space for its "HotDesk" and small office spaces, where small businesses 10 people or less could rent out a coworking space to build up their business growing into a bigger company (and to bigger space). Now, WeWork wants to not only be there for when a new company plants its seed, but when it wraps up Series A, B, and C funding rounds and is in its teenage years of becoming a household name.

But to be clear, renting out spaces to medium-size businesses isn't a new venture for WeWork. The company already operates hundreds of offices that can comfortably fit a team of 11-250, but it is looking to expand in this area in order to compete with the likes of Industrious ($PRIVATE:INDUSTRIOUSOFFICE).

These offices were in 65 specific cities, which were then broken down into 106 districts according to how WeWork classifies office location. Out of all of these cities, New York City has the most individual real estate pieces with at least one medium-sized office space, while London has the most listings for office spaces (i.e. physical listings within its real estate portfolio).

London is also one of the places WeWork said it would specifically target with its HQ expansion. Other places that it named were Shanghai (tied for 3rd on the real estate list, 4th in individual locations), Boston (9th on both lists), and Denver (24th in real estate, 22nd in listings).

While the other overseas and domestic targets it has aren't listed, an overall expansion of its medium business offerings will help WeWork compete in the war to become the biggest coworking company in the world against old titans and younger upstarts. 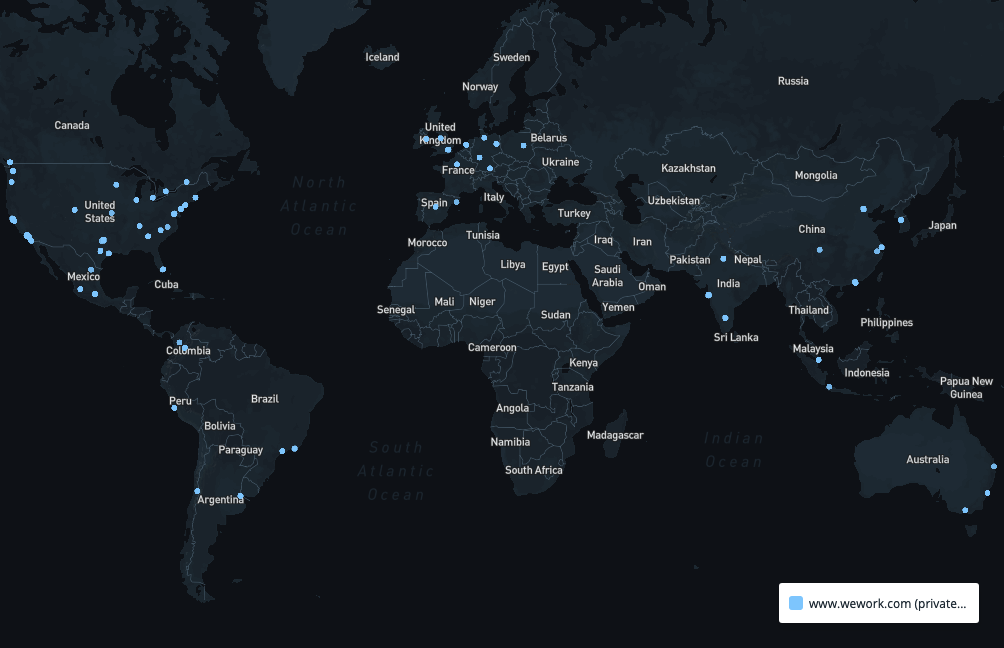 *** WeWork is a subsidiary of the newly-named The We Company, but for the purpose of this article and to limit confusion, we only used "WeWork."