The ambitious, bold and hungry start their week with The Business of Business!
Innovation
12.10.18   1:08 PM Innovation

The coworking world: How WeWork, Regus, and Industrious measure up

Our latest report compares three coworking companies to see which ones offer the most — and most affordable — workspaces in America and the world.

In the age of emerging businesses, remote work, rand the gig economy, the demand for office real estate is high. Enter a startup for those startups: WeWork ($PRIVATE:WEWORK).

Founded in 2010 after Adam Neumann and Miguel McKelvey built and left GreenDesk, WeWork is essentially a mega-lessee of office space, giving companies office space along with equipment and perks like snacks and drinks. Small and large business from Reddit to PepsiCo ($PEP) have utilized WeWork space either as primary or regional office space.

WeWork's valuation is over $45 billion thanks to SoftBank ($TYO:9984), and manages over 10-million square feet of office space.

WeWork isn't the only company that offers fledgling companies and contracted superheroes space to get busy. In fact, it occupies in a tough —and somewhat crowded — middle seat between an established publicly-traded powerhouse in IWG plc, A.K.A Regus.com ($LON:IWG), and a scrappy competitor in Industrious ($PRIVATE:INDUSTRIOUSOFFICE).

Judging solely by the tale of the tape, Regus has a formidable lion's share of the coworking marketspace. According to data on Regus.com, WeWork, and Industrious from the online office space rental website LiquidSpace ($PRIVATE:LIQUIDSPACE), Regus has over six times the amount of offices as WeWork.

Regus offices are in 114 out of 195 countries, a footprint that few of the world's companies can compare to, let alone WeWork. which runs spaces in 28 countries.

Of course, it wouldn't be fair to make this comparison without mentioning IWG plc's history.

Founded in Belgium in 1989 when its founder, Mark Dixon, wanted a solution for travelling businesspeople who needed an office, Regus debuted on the London Stock exchange in the year 2000. In the 11-year pre-IPO period, Regus had already spread to Latin America via Brazil and to China.

The next year, it bought out U.S.-based Stratis Business Centers, and after a decade and a half of global expansion, established a holding company in IWG plc.

This means it has a big lead compared to WeWork, which is still in the process of acquiring new office real estate as analysts and investors anxiously await an IPO filing.

Regus only reveals its pricing to potential customers; it does not list prices on its website nor on marketplace websites such as LiquidSpace.

However, WeWork and Industrious are up-front with their fees, and because of that, we are able to compare how the younger Industrious is trying to cut under WeWork in some of America's largest markets.

The top cities where these companies have plenty of real estate are New York, Washington D.C., Atlanta, Chicago, Seattle, Los Angeles, and San Francisco. Industrious also has an advantage in Scottsdale, Arizona, as WeWork does not have any real estate there... yet. 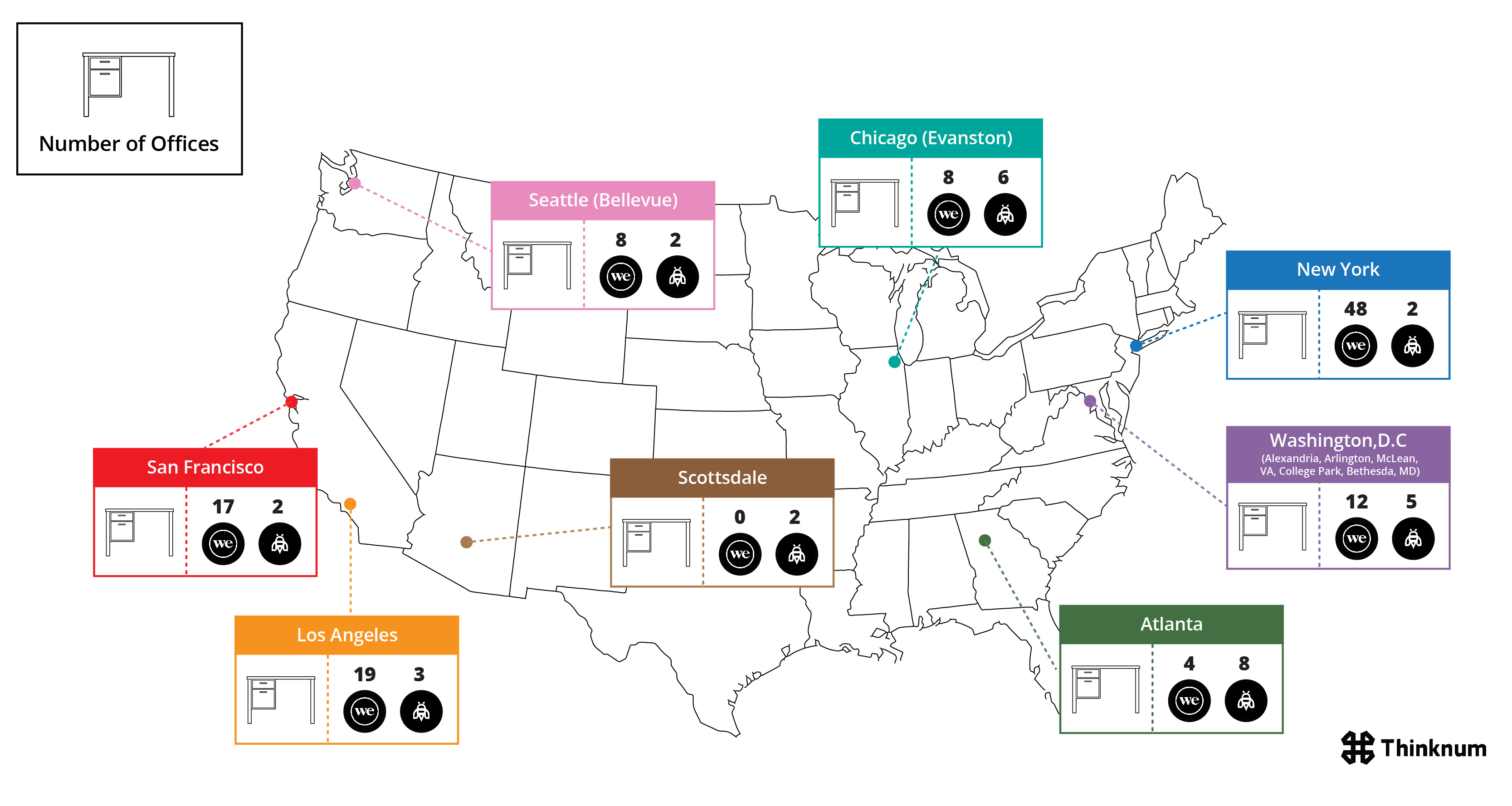 When looking at the raw number of offices (outside of Scottsdale and Atlanta), WeWork heavily outnumbers Industrious in major markets. However, in terms of price, Industrious undercuts WeWork in nearly every city. That's a big deal for bootstrapped startups. 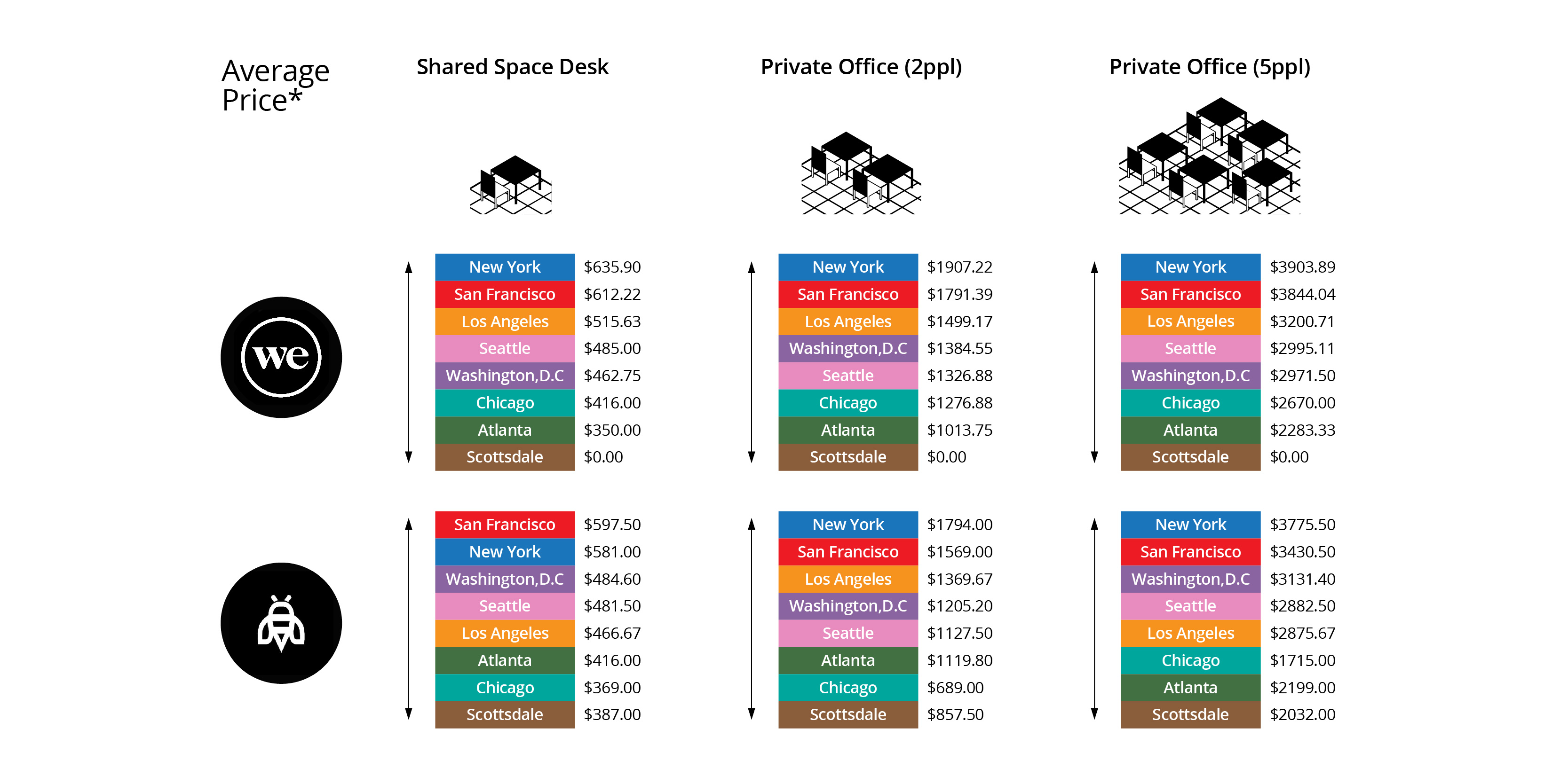 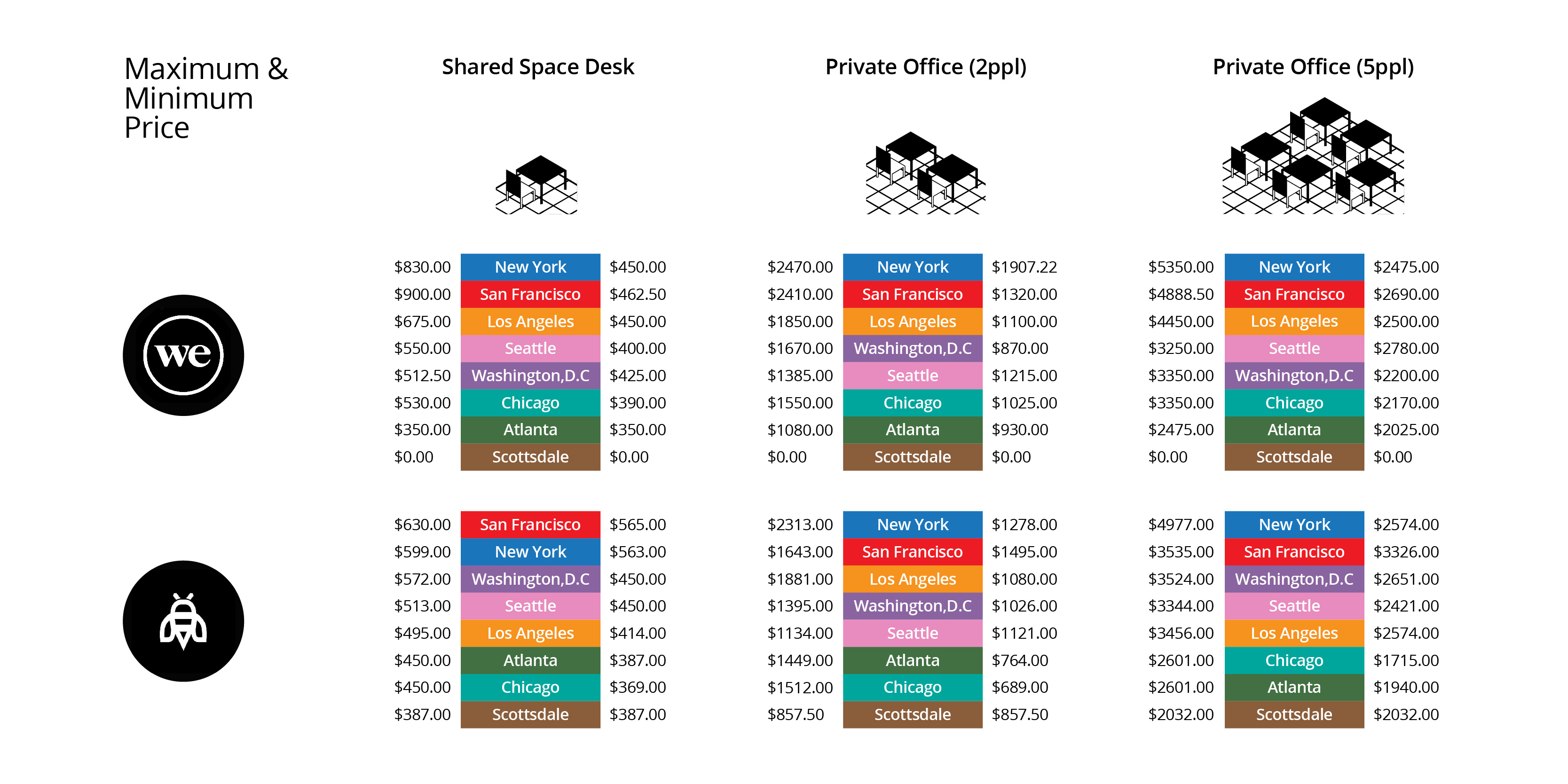 Of course, price isn't everything; one office may have a better location in a city than the other. Meanwhile, the companies offer different perks to renters. For instance, Industrious offers clients local snacks and the option to throw parties at its offices, while WeWork says it has dedicated phone booths and free fruit water.

While WeWork's competitors aren't necessarily fit for a direct comparison — one small, the other massive — seeing where it fits in between two high-profile alternatives gives us a few thoughts about where the company can go from here.