The ambitious, bold and hungry start their week with The Business of Business!
People
3.2.18   5:00 PM People

Well that was fast: "Fire and Fury" dives in Amazon sales ranks

The flame that burns brightest burns half as long... especially in a news cycle this fast and furious

One of the fun things (depending on how one defines "fun") of the Trump era: The news cycle burns so fast and furious that last week's national phenomena are this week's distant memories, drowned out by five fresh controversies.

Quick Trivia quiz: Who was the author of bestselling White House tell-all tome Fire and Fury?

It's easy to get confused (Porter was last week's controversy —now forgotten — who had to quit the White House for being a serial wife beater; Devin Nunes was the previous week's "#ReleaseTheMemo" controversy that was supposed to bring down the Mueller investigation until it was released and didn't actually bring down anything). The correct answer was C) Michael Wolff - his insider scoop Fire and Fury was all anyone was talking about way back in the early days of 2018, 5 whole weeks ago. But as you can see from Thinknum's data trail, after a good run at #1 he is slilpping into "last week's news".

Alas, it's been bumped from the top 10 by such luminaries as Jordan B. Peterson's 12 Rules for Life, Dr. Mark Hyman's Food: What the Heck Should I Eat?, Madeleine L'Engle's 50-year-old A Wrinkle In Time (new movie!), and Dav Pilkey's controversial Dog Man and Cat Kid.

Wolff must be so frustrated - it's understandable that he would storm off an Australian news show this week ("Why am I even IN Australia? I should be on CNN, dammit!")

On the positive side, despite its slip in the daily ranking, its successful run of the past six weeks means it (at least for the moment) still ranks as the #1 seller of 2018 (so far). 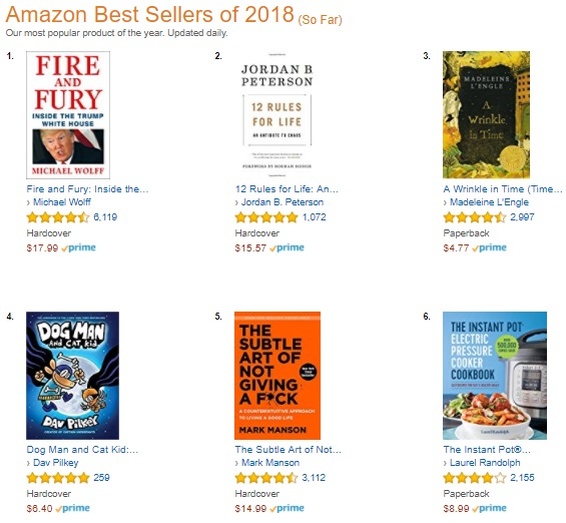 For a book that was intensely controversial, it's pretty highly-ranked (I wonder if Amazon has started a troll patrol to trim out the negatives? Hillary Clinton's book had a ton of one-star ratings before it was even released....)

And the volume still tops out at #1 in several Amazon categories:

Never fear, though... Wolff will get another shot at relevance. The Hollywood Reporter says Fire and Fury has been snapped up by Endeavor Content for a forthcoming TV series!

In the interests of equal time, we think it's only fair to give the final word to President Trump: