The ambitious, bold and hungry start their week with The Business of Business!
Innovation
12.6.18   3:47 PM Innovation

Acquisition rumors abound, but hiring trends suggest that Uber might simply be building its own scooter network.

Make no mistake: no matter where you're going or how you want to get there, Uber ($PRIVATE:UBER) wants to be part of your journey. The final mile or so of that may include a scooter or bike, which explains Uber's current stake in scooter and bike-share company Lime ($LIME) and, even more so, its rumored interest in outright acquiring the company or its competitor Bird ($PRIVATE:BIRD).

Rumors are that Uber is looking to grab one of the companies before the end of the year, and that acquisition talks are already in the their last mile. But if hiring data trends tell us anything (and they often do), Uber is already hiring its own scooter network team with or without Lime and Bird.

On October 19, 2018, Uber listed 10 jobs with the term "Scooter" in their descriptions. As of yesterday, there were 43 such jobs. In short, Uber is busy building a scooter team with or without Lime and Bird.

Current employees of Uber aren't being shy about the new team, either. 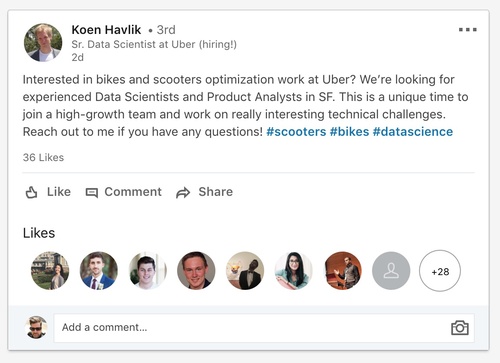 It adds up, too: Uber may have the funds to acquire Lime or Bird, but it also has the technology and infrastructure to scale out an operation of its own. And even if it is indeed in talks with Lime and Bird, those conversations could simply be educational for Uber as it looks to better understand the current market and its challenges. Given Uber's extant network, it could likely crush the competition in little to no time.

It wouldn't be the first time Uber pulled a fast one like this when it comes to intellectual property, either. One only has to look back a couple years to when Anthony Levandowski jumped from Google's Waymo to Uber, bringing with him some serious autonomous vehicle trade secrets. That incident resulted in a $245 million settlement — much less than Uber would have paid to acquire a company in that space.