Imagine losing 160 million followers overnight. That could happen for Samsung if a social media experiment in Australia proves successful.

It is generally accepted now that social media and the "likes economy" that it has created can be a bad thing, encouraging people — and businesses — to post questionable content meant to generate as many likes and followers as possible. No matter how destructive it can be to our health, our democracy, or our children.

But now Facebook ($FB) is experimenting with reducing the importance of Likes on both its main social network and Instagram as it responds to pressure from groups concerned with society's social media addiction.

The experiment is limited just to Australia, where Facebook says it will "gather feedback to understand whether this change will improve people's experiences".

If the experiment moves to America, some very high-profile businesses could be affected, including Coca-Cola, Samsung, and McDonalds.

Two of the most-liked Facebook accounts in the US, Samsung ($KRX:005930) and Coca-Cola ($COKE), combine for a total of more than 262 million Likes on Facebook. On Facebook, when a user "Likes" a business, he or she also follows that business' Facbeook page. That means every time Samsung posts to its Facebook page, it's sending a message directly to each of its followers, in this case 160 million people. Compare that to the total reach of the Super Bowl at 98 million people, and one can see that a business like Samsung would be watching Facebook's moves in this experiment very closely.

We track total likes for major Facebook accounts. As of this week, among the top-25 Facebook accounts are the aforementioned Samsung, Coca-Cola, and McDonalds, along with YouTube and Buzzfeed. The complete list of top-25 accounts is included below (click for a larger version). 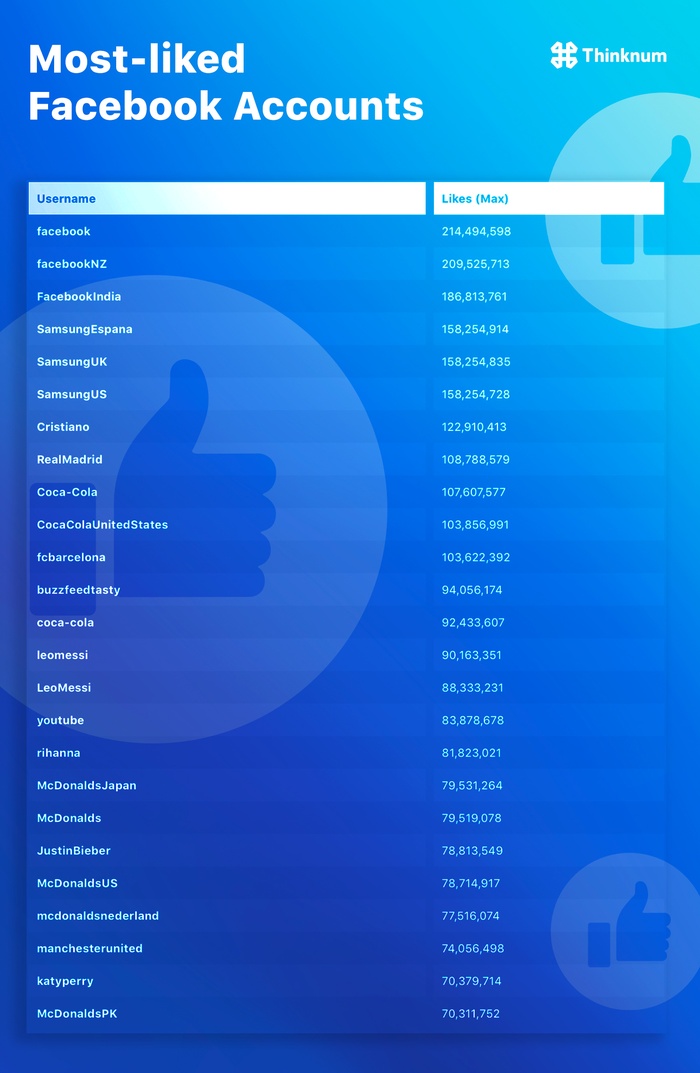 While Facebook's Like-supressing experiment is limited to Australia for now, it's also not clear if business accounts like those listed here will be affected. It's entirely possible that if the experiment proves successful in lowering the amount of social anxiety experienced by Instagram and Facebook users, the company could target only those accounts that may trigger such things, such as fashion and lifestyle influencers.