The ambitious, bold and hungry start their week with The Business of Business!
Markets
5.11.18   1:13 PM Markets

The secret of REI's success

With record sales in a complex retail environment, REI's location and branding strategy measure up to success. Here's how.

It’s no picnic in the outdoor retailer market. Two years ago, citing competition from online retailer Amazon, Sports Authority closed its doors for good. And last year, the parent company of Eastern Mountain Sports filed for bankruptcy. Dick’s Sporting Goods, while showing no signs of shutting its doors, has missed revenue projections and same-store sales goals.

Meanwhile R.E.I. ($PRIVATE:PRIV_REI), the humble, if sometimes crunchy, co-op, has has emerged as a thriving anomaly in a retail environment being choked out by Amazon (so much so that the retail co-op took the unusually bold move of dictating sustainability standards to its suppliers earlier this year). In 2017 the company posted record sales, topping $2.6 billion nationwide.

Why's it working? Because people just like the REI brand, and they have the money to show it.

Thinknum data backs up this trend: REI’s Facebook page has been steadily accumulating traffic and likes, and now boasts more than 2 million followers. Clearly they’re doing something right. And it goes beyond the feel-good co-op structure and a sustainability-minded business structure. 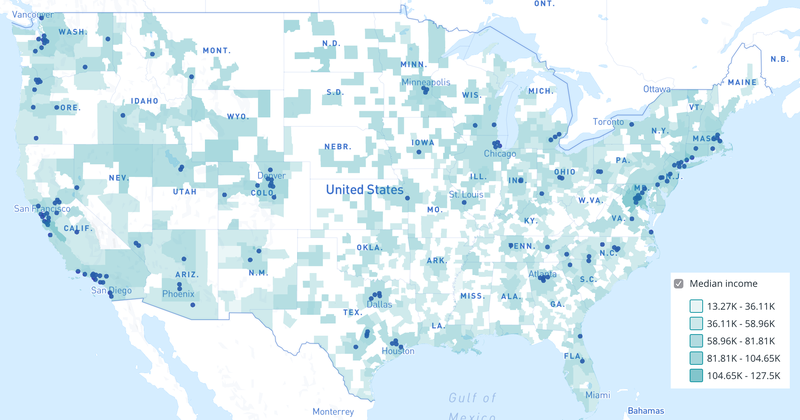 An analysis of REI location data collected at Thinknum over the years shows that the company is very selective about where the co-op opens new stores. Like Apple has done with the Apple Store, REI has chosen to place its 151 retail locations in areas with well-above-average median income demographics.

The national map of REI locations reads like a treasure map of high-income communities. Where Census Bureau median income is the highest - in the DC Metro Area, the New York Metro area and Southern California, REI has sprung multiple locations, sprouting up like mushrooms after a spring rain. In fact, the average median income for all REI locations is a very well-to-do $93,500, far above the $59,000 national average.

For a brand that is as much about experience as it is about product, the formula works. Unlike Amazon, whose only face-to-face customer interaction is a knock on the door from UPS (if you’re lucky), REI puts a premium on real-world interaction once it get its well-healed customers in the door: They’re not just selling you the tent, they’re also selling the expedition to go with it. Literally. REI Adventures, which sells small, guided trips and adventures around the globe, is the co-op’s fastest growing revenue stream.

Clearly it pays to be different, and REI’s feel-good, communal vibe goes right to its core. Ownership (or membership) of the co-op costs just $20 (fully disclosure: The author is a member, although not currently eligible to vote for the co-op’s board).

Championing environmental stewardship, sustainability and diversity can work as a business model - as long as your customers can afford it and they’re looking for that kind of thing.