The ambitious, bold and hungry start their week with The Business of Business!
Innovation
3.1.18   9:34 PM Innovation

Spotify goes public, by the numbers

After 10 years of bringing music to the people, the Swedish streaming giant is taking itself public

Spotify launched its bid to go public today, an unusual offering that bypasses Wall Street and takes its shares straight to the people. The filing reveals a plethora of data about the world's largest streaming service.

For one thing, it's about twice as big as rival Apple Music ($AAPL), and (despite what the Wall Street Journal claimed last month) that's not changing any time soon.

It's estimated that Spotify is worth anywhere from $19 billion to upwards of $23 billion on the private market. Business Insider notes "Its F-1 form pegged the IPO as a $1 billion offering, though that figure is likely a placeholder number that could change as the offering gets closer."

Spotify ranks consistently in the top-5 when it comes to Facebook logins - since last May, nearly always either #1 or #2.

And we now have explicit numbers for their premium subscriber base:

Billboard had estimated Spotify at 19 million US paid subscribers at the end of 2017 - Spotify now says there are 22 million. That's a healthy difference.

We ran this graphic last month - now we can add a definitive number to Spotify's total paid subscribers as of Dec 31, 2017: 71 million.

Apple Music, in contrast, is at 36 million.

And in sharp contrast to the Wall Street Journal report that said Spotify's US paid user base is only growing at 2 percent annually, the company says its global paid base has grown 46 percent (year-over-year) since December. 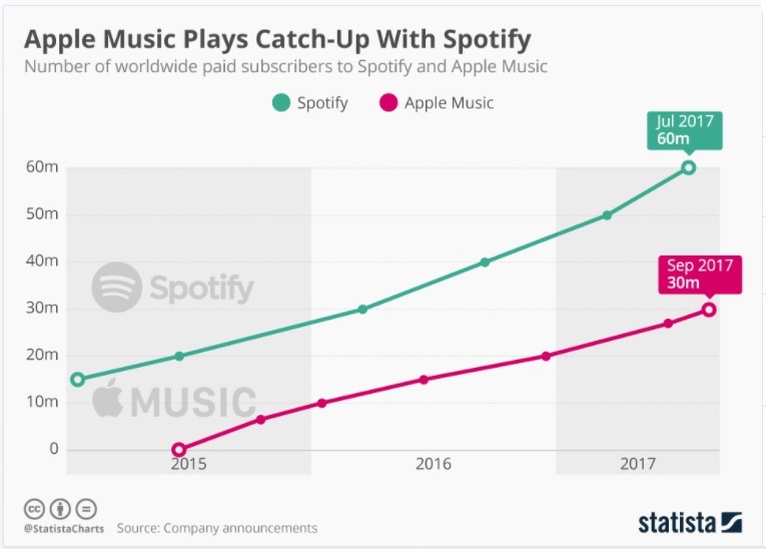 Loss of $1.4 billion to $1.5 billion (which includes a number of one-time financing costs)

“A key positive surprise in Spotify’s financials is the magnitude of the uptick in gross profit margin from 2016 to 2017. Effectively, Spotify’s gross profits have accelerated to 100%+ growth in past twelve months.”

Here his full letter, as posted in the SEC filing:

From the age of four, my life was about music and technology—never one without the other. Over time, I realized that by combining my two passions, I could create a new paradigm, one that helped fans and the creative community—singers, songwriters, bands, everyone in the creative process—chart a new course for an entire industry.

Spotify is the manifestation of those dreams. Music was too important to me to let piracy take down the industry. There had to be a way to give people access to the music they loved while allowing creators to get paid for their work, and to expand their creativity.

So I built a company based on a core set of values: innovation, passion, collaboration, transparency, and fairness. These values drive how we work with the creative community and how we treat our users. They're why we're committed to a diverse workforce in an open, trusting company culture.

Today, Spotify is one of the largest drivers of global music revenue. We've helped restore a rapidly shrinking industry to growth, and connected over a million artists with hundreds of millions of fans.

People constantly tell me how music has helped them through life's biggest moments—birth and death, euphoria and heartbreak. At Spotify, we want to enrich, strengthen, and extend those moments and connections. So while some companies rely entirely on data, we take a different approach. We start with human creativity, augment it with our expertise and understanding, and then leverage with the efficiency of algorithms.

Music has just been the beginning. We're an audio first platform—as a top provider of podcasts, we're also connecting audiences to the conversations that we think will shape the future.

And we have even bigger aspirations. We envision a cultural platform where professional creators can break free of their medium's constraints and where everyone can enjoy an immersive artistic experience that enables us to empathize with each other and to feel part of a greater whole. But to realize this vision, professional creators must be able to earn a fair living doing what they love, where monetization is at the core of a creative proposition and not an afterthought. We care deeply about our creators and our users and we believe Spotify is a win-win for both.

Everyone who partners with us—employees, users, the creative community, brands, investors—should understand what our mission means to us, how we make decisions, and why.

We know that if we're going to succeed as a company and as an industry, we have to think, build, plan, and imagine for the long-term.

To build a better world by unlocking human creativity, we are committed to creating a better experience for users—and to enabling more creators to live off their work. We firmly believe that in the long run, these priorities will provide greater returns to all of our stakeholders.

That's because the future is markedly different from the past.

The old model favored certain gatekeepers. Artists had to be signed to a label. They needed access to a recording studio, and they had to be played on terrestrial radio to achieve success. Today, artists can produce and release their own music. Labels, studios, and radio still matter, but in a cluttered landscape, artists' biggest challenge is navigating this complexity to get heard. We believe Spotify empowers them to break through.

With access to unprecedented amounts of data and insights, we're building audiences for every kind of artist at every level of fame and exposing fans to a universe of songs. In this new world, music has no borders. Spotify enables someone in Miami to discover sounds from Madrid. It links immigrants in Boston to songs back home in Bangkok.

We're working to democratize the industry and connect all of us, across the world, in a shared culture that expands our horizons.

With a catalog that grows by tens of thousands of new creative works every day, Spotify is like a flywheel. Creators and consumers engage and react to each other, building momentum. These reactions generate even more buzz, which we believe, in turn, fuels even more creativity. Now, we are going to take the lessons we've learned in music and apply them across culture. In the future, Spotify will strive to more meaningfully connect people to the cultural experiences they care about—or don't yet know they care about—to fit the mood and moment they're in.

Today's creators can collaborate with audiences across time zones. They incorporate video and interactive technology to create new and inspiring art, and more. They release their own work and directly make and reach fans. As we evolve, Spotify will meet creators where they are and empower them with even more tools to do what they love in their own authentic way, and reach even more people. What started out as an application and grew into a platform must now become a global network—one that recognizes and nurtures the interdependent relationships between creators, producers, publishers, labels, fans, and everyone in between.

To get there, we need transparency. We need discovery. We need new tools of creativity.

Artists' greatest barriers to success are achieving exposure and earning money. That's why Spotify wants to create a fair and open market, where fans can support the artists they love and creators can understand how they're paid and earn a living.

Musicians, for example, compete against the entire history of music and a daily flood of new content. The central paradox for fans is that access gives you everything—but everything isn't enough. Discovery is hard without a compass. Unprecedented choice at an affordable price must come with effective personalization to help audiences navigate a sea of content, and to help artists directly reach a sea of listeners. With the right mix of data insights contextualized by human experts, Spotify reunites fans with old favorites, and lets them discover new ones.

We intend to give the creative community the data, technology, and connections to not only make a living but also accelerate the exposure of their work. We believe that these tools we're building will go far beyond music, building bonds between creators and consumers across every genre and form.

And when we get there, the possibilities for culture will completely change. Again.

Today, art has an even greater opportunity to be a transformative cultural force. And culture is the force that binds us all—no matter who we are or where we're from—in a shared human experience. It's what helps us understand one another across differences. It's what breaks us out of isolation and brings people together. That's why, everywhere I go around the world, I see artists finding inspiration across oceans, drawing on sounds born in one part of the world and making them their own—from punk music in Myanmar to rap in Mongolia.

This is the future we envision; where artists cross genres and cultural boundaries, creating ideas that propel society forward; where fans can discover something they never would have otherwise; where we're all part of a global network, building new connections, sharing new ideas, across cultures.

We really do believe that we can improve the world, one song at a time.