The ambitious, bold and hungry start their week with The Business of Business!
Innovation
9.27.18   5:24 PM Innovation

SpaceX has been hiring for a "Crew Mission Management" group since 2016. Here's what some of those positions looked like over time.

As Elon Musk's private space aerospace transportation company SpaceX ($PRIVATE:SPACEX) gears up for a manned mission around the moon, the company has accelerated hiring for positions focused on crew operations under a team it calls "Crew Mission Management".

SpaceX is already busy assembling manned missions, some more well-known than others. Most recently, for instance, it was announced that Japanese billionaire Yusaku Maezawa will travel around the moon with six to eight other people.

But on the ground, SpaceX has been hiring crew-support positions with the term "Crew" in their titles since 2016. Here's how those openings have appeared on SpaceX's careers site over time:

While there was minor growth in openings over the summer, by looking at the openings cumulatively, we begin to see how the on-ground team at SpaceX is shaping up when it comes to developing and managing crew operations. Here's that list in order of when the jobs were posted.

While this is by no means a complete list, it reveals a bit of the hiring strategy behind SpaceX's efforts to build the Crew Mission Management team since 2016, when it began a search for a "Crew Displays Engineer".

Perhaps most interesting of late is a listing for "Mission Manager, Crew" which was first listed on July 17, 2018, who will serve as "deputy to [SpaceX's] Director of Crew Mission Management".

The job description includes mention of SpaceX's Crew Mission Management team, which will expand "in anticipation of ... upcoming crewed missions for the Dragon 2 spacecraft" and will contribute "to the early architecture of the Big Falcon Rocket program."

SpaceX is looking for an accomplished aerospace project manager to serve as the deputy to our Director of Crew Mission Management. The Crew Mission Management team is expanding in anticipation of our upcoming crewed missions of the Dragon 2 spacecraft. This close-knit team serves as the main interface between the SpaceX technical teams and our external stakeholders. They work across disciplines to certify our spacecraft for astronauts and lead all programmatic aspects of their specific missions. The team also contributes to the early architecture of the Big Falcon Rocket program. Members of the team excel across a breadth of functions including product management, business development and sales support, proposal development, mission management, mission engineering, contract management, scheduling, and regulatory coordination. 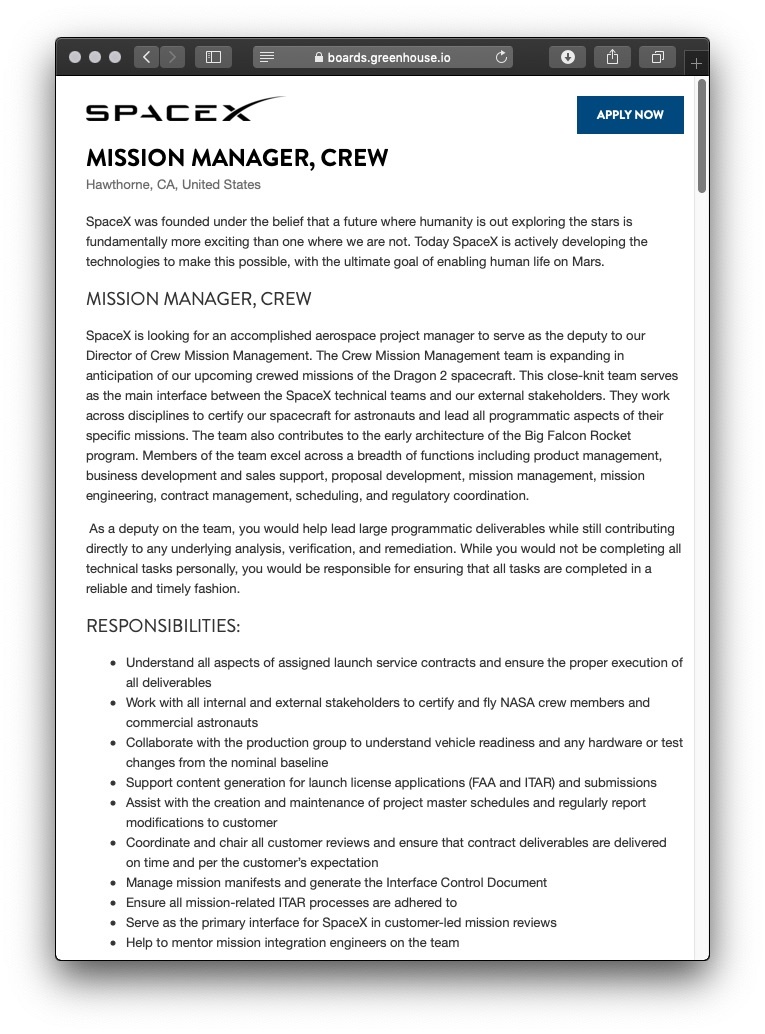