The ambitious, bold and hungry start their week with The Business of Business!
Innovation
6.6.18   1:21 PM Innovation

Government contract data that we track shows that SpaceX is picking up launch contracts as others lose out.

According to data we track in the Thinknum Data Lab, the two legacy aerospace companies both experienced notable drops in contract value and frequency during the Fall months of 2016 and 2017. The August-November period was a relative ‘deadzone’ with only two spikes in contract value surpassing $2 billion. Meanwhile, SpaceX saw increased obligated government contract sums for the same seasonal periods, compared to preceding years.

If we take a look at launch costs, this trend makes a lot of easy sense. SpaceX launches accounted for 60 percent of global launches last year, and the erstwhile-startup can launch its Falcon 9 for a (relatively) modest $80-90 million. ULA tacks on a much higher bill -- the Government Accountability Organization reported (in 2015) their average cost is more than $400 million/flight, based on actual Air Force contracts. Our data confirms both Boeing’s and Lockheed’s contract value vacillating around that amount.

But any Internet space cadet would know that SpaceX’s rise to low-orbit prestige wasn’t without conflict. In 2014 SpaceX filed a lawsuit against the federal government for implicit bias in favor of ULA for big aerospace missions. The suit concerned an $11-billion sole-source contract the U.S. Air Force gave the ULA. Once the suit was settled out of court in early 2015, SpaceX was awarded greater consideration when competing for national-security launch missions. Considering the economic scope of America’s military-industrial complex, this was SpaceX’s biggest win since its first break in the Xmas of ‘08.

After the settled suit, SpaceX landed its first military contract with USAF to launch a satellite into space in 2016, an $82.7 million deal that marked the end of the Boeing-Lockheed monopoly over military launches. But while this was a victory in government contracts, SpaceX saw its first major catastrophe in September 2016 when one of its Falcon 9 rockets exploded during pre-flight preparations, destroying a Facebook internet satellite worth billions.

Undaunted, SpaceX secured more contracts in the following year of 2017, including a satellite launch assigned in March 2017 worth $96.5 million, and a $645 million deal (split with ULA) to fly three next-gen GPS satellites into space. And when SpaceX partnered with USAF again to launch the Air Force’s reusable X-37B plane into space, the ULA cut its Atlas-V rocket price tag by a third.

But this turnaround didn't happen in a void — in fact, world politics played a part.

When Congress took issue with ULA’s importing Russian RD-180 engines to power Atlas-IV and Atlas-V rockets’ first stage, ULA found itself in a tricky catch-22. Its cheapest tried-and-true rocket’s most essential component was suddenly too politically hot for the times.

It recast ULA as the space-age middle-man for major paychecks from the U.S. government to Putin, so the Mosconite rockets were slated to be phased out in 2014 as political recompense for the Russian Federation’s annexation of Ukraine’s Crimea peninsula. But this was repealed in late 2015 to allow import for national security missions, and later amended mid-2017 to permit their use for civil and commercial launches. 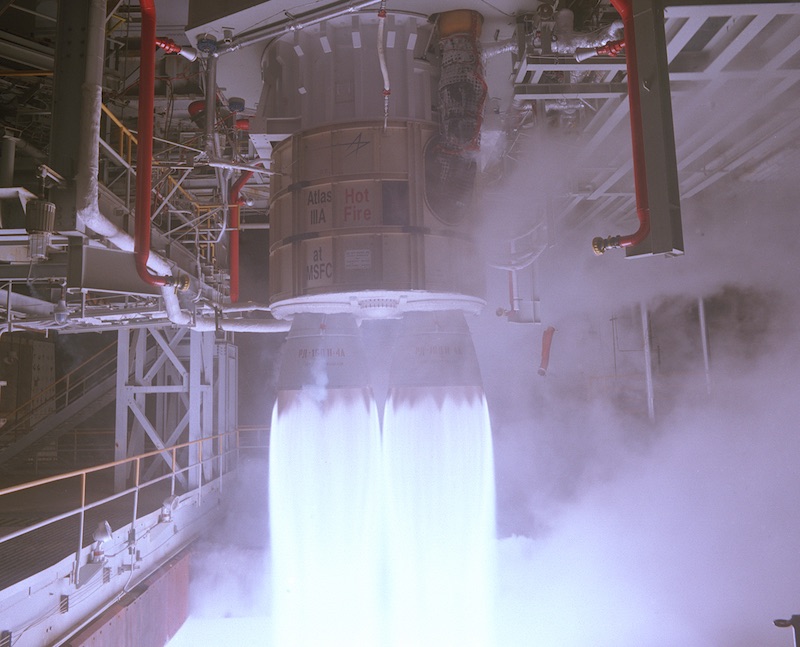 Test-firing of the Russian RD-180 rocket

This most recent amendment is clearly related to SpaceX’s emerging status as the new standard alternative to ULA. Not that the ULA doesn’t have all-American rockets; the Delta IV is a fully-capable heavy-payload launch solution, but at roughly $350 million per launch, it’s more expensive than the Atlas series (now less than $100 million), and still more expensive than SpaceX’s incoming heavy-lift rockets. This makes the Delta IV an unviable competitor to SpaceX, especially since the latter’s successful test launch of the Falcon Heavy this February (estimated at $90 million per launch). With the rapid production of the Big Falcon Rocket (as evidenced by SpaceX’s Hawthorne, CA headquarter’s hiring spree), the pressure on ULA is rising.

The question of whether Boeing and Lockheed Martin will continue to see seasonal dry spells is manifold. It turns on whether Russian-made rockets will be permitted in the future, and how soon SpaceX can realistically take on heavy-lift, national defense missions more frequently. If Russian rockets are banned before either ULA or SpaceX have an American-built alternative, ULA would have to charge $1 billion for a single heavy rocket launch. But SpaceX isn’t the only alternative to the space-race legacy.

Orbital ATK ($OA) and Aerojet Rocketdyne ($AJRD) have received millions from the Air Force for the development on the F-22 engine. In January 2016, Orbital ATK received $46.9 million. A month later, Aerojet Rocketdyne was granted $115.3 million for the same agreement. These are well within SpaceX’s earnings range, but their CEOs already have a strong track record in space and defense technology, whereas Musk’s reliance on the contingencies of nascent commercial technology, e.g., Tesla ($NSDQ:TSLA), is less robust. Meanwhile, Blue Origin ($PRIVATE:BLUEORIGIN), from founder Jeff Bezos, who’s also the founder, chairman, and chief executive of Amazon ($NSDQ:AMZN), is accelerating its own rocket development programs.

If SpaceX can get actual NASA astronauts and exploratory flagship missions (similar to the James Webb Space Telescope and the Europa Clipper) into space before ULA can get its NGLS off the fiscal drawing board, the fate of future government contracts, both military and civilian, could play even more to SpaceX’s favor. Indeed, ULA’s President and Chief Executive of ULA Tory Bruno has set 2022 or 2023 as the goal for national security NGLS payloads, which means SpaceX has ample time to widen its lead.