The ambitious, bold and hungry start their week with The Business of Business!
Innovation
10.29.18   7:52 PM Innovation

Build! Build! SpaceX fires up hiring with 24% more open positions, the majority of which are production-line openings for its Hawthorne, CA facility.

SpaceX ($PRIVATE:SPACEX), the private aerospace and space transportation company headed by Elon Musk, is coming out of a fall hiring spree for its rocket production line. The company is preparing to enter a test phase for its BFR spaceship and clearly needs as many hands on deck as it can get.

In mid-September, the company listed 238 open positions on its careers website. On October 23, that number hit 295, a 24% increase. The number of openings has since settled in at 285. While that's nowhere near its highest job-listings count of 556 from May 2018, it's a sign that the company is beginning to reinvest in human capital.

The vast majority of the openings — 211 of 285 — are located at SpaceX's Hawthorne, California headquarters.

Of the open positions, a large amount — 74 job openings — are listed under "Production", followed by 54 for "Supply Chain Management" and 32 for "Vehicle Engineering".

Of the Production jobs, most are for specialized technicians, including two Propulsion Technicians and an Avionics Wire Harness Technician. 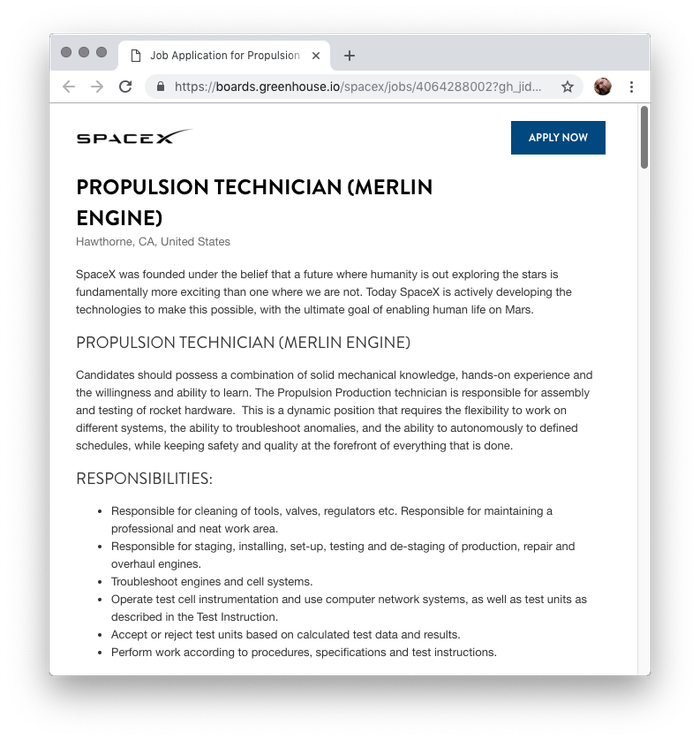