The ambitious, bold and hungry start their week with The Business of Business!
Innovation
7.23.18   1:50 PM Innovation

Snapcash may be dead, but Snap is still hiring for Spectacles, Zenly, and Bitmoji

Snap ($SNAP) has been undergoing a strategic overhaul for some time now as it struggles to find its place in a market dominated by rival Instagram. Today, it announced that it would shut down Snapcash, its peer-to-peer money transfer service. It's also gone through its share of layoff rounds, resulting in questionable workplace culture and unhappy employees.

Snap hiring is now at or near its lowest point since last year, but that doesn't mean the company isn't hiring. In fact, by comparing its hiring activity — especially relative job functions — between now and its highest point in September 2017, we begin to see the direction(s) the company is heading in. 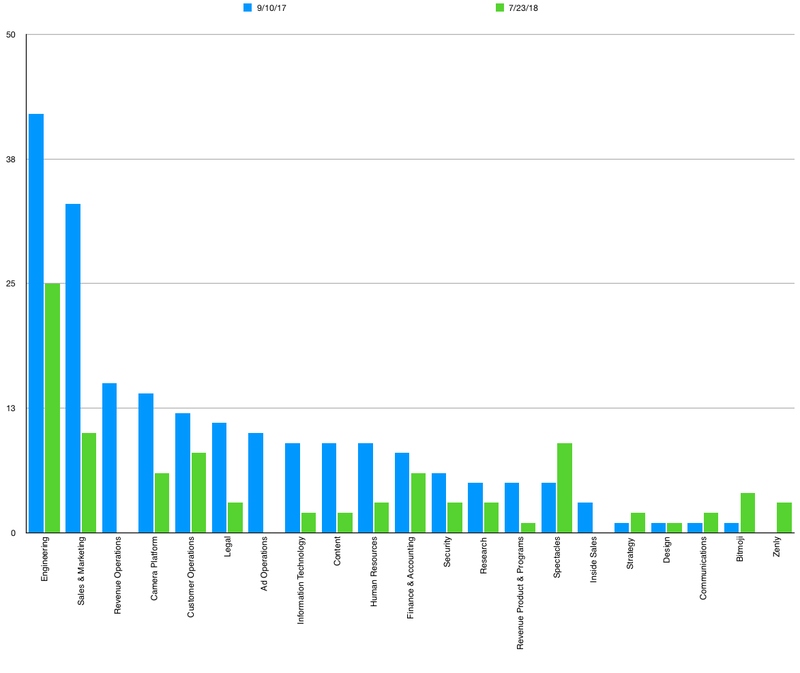 Hiring is down in some of Snap's critical divisions, including engineering and sales & marketing. Hiring has apparently ceased completely in its Revenue Operations division, perhaps related to the shut down of Snapcash.

However, there is some uptick in hiring at Snap, most notably in its Spectacles, Bitmoji, and Zenly groups.

Spectacles is Snap's camera-focused eye glasses that it's invested in heavily. Hiring efforts continue for that division, with 9 open positions today comapred to just 5 last fall. Of those 9 positions, 8 are listed as engineering and one is a product designer.

Zenly is a social map platform that Snap acquired last summer. It manifested in Snap Map, a Snap feature that shows where users' friends are active. Simiarly, Snap has upped hiring for Bitmoji, Snap's subsidiary that helps users created cartoonish avatars for the social platform.

It's tough to put all of this data together into one focused new strategy for Snap, but it does tell us that the company remains focused on building audience, something its investors would certainly appreciate. As inferred above, Snap has had a tough time attracting audience away from Instagram, Facebook, and other social platforms.