The ambitious, bold and hungry start their week with The Business of Business!
Innovation
4.3.19   2:47 PM Innovation

How Peloton is killing the fitness industry

Peloton has massive momentum, from funding to hiring to its online community. But can it keep it up?

Home exercise equipment is a joke.

No, really: comedians have mocked treadmills as glorified coat hangers for years.

Every year, millions of Americans looking for a way to get in shape order everything from cheap ab rollers to expensive ellipticals in the hopes of turning their bedrooms into gyms. And every year, much of that equipment gets pushed into a closet and forgotten.

But Peloton ($PRIVATE:PELOTON), a luxury exercise bicycle company that is shipping thousands of $2,000 connected "group exercise bicycles" to an enthusiastic, almost cult-like fan base, is changing all of that. Here's what's working at Peloton when it comes to data.

Peloton says it has more than 1-million users, who not only bought the bike, but who are also paying monthly subscription fees. Its success has created a class of similar companies hoping to get in on the action, like Mirror (a cable-pulling cardio machine class), Hydrow (a group rowing machine), and Tonal (a connected weight machine).

After a raise of $550 million last summer, Peloton is valued at $4 billion. And this January, when people make their fitness resolutions, people were talking about the brand. A lot.

A cult-like fanbase on social media

Last summer, Peloton was lucky to have 8,000 conversations mentioning the brand on Facebook. But in January 2019, brand mentions spiked to nearly 70,000 by mid month.

Meanwhile, the company's Facebook follower graph shows 454,000 followers, up from 355,000 this time last year. The @onepeloton Facebook page is extremely active, too: dozens of daily posts from avid fans are sprinkled by brand messaging and motivational quotes from Peloton's social media team in a mix that looks a lot like a CMO's wildest dreams. 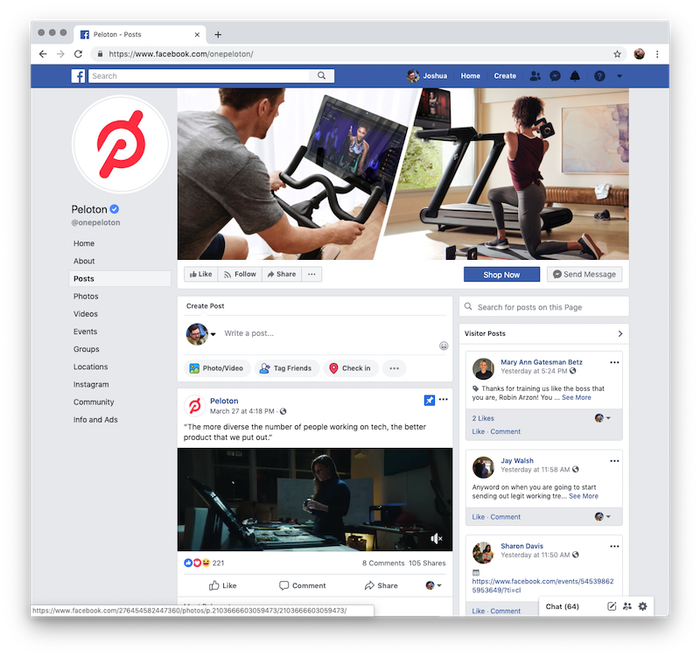 Peloton's site includes 1,613 reviews of the exercise bike. Out of all of those reviews, the average rating is an exceptionally positive 4.63 out of 5 stars. Averaging daily reviews for Peloton over time reveals a graph that looks a lot like a perfect review is the norm for the brand:

On September 6th, 2018, there were 187 job openings at Peloton. By the end of the month, it nearly dobuled to 343. That jump in job openings, by no mere coincidence, happened right after the company's aforementioned $550 million raise. A large number of the openings are for "Tread Specialists", people to work on Peloton's new running-focused connected treadmill.

A Tesla-like ($TSLA) approach to retail

Peloton doesn't have stores, per se. Instead, it has Showrooms, sparse retail spots where prospective customers can "get a personalized tutorial and learn more about the live studio experience [they] can bring home." The look is luxury; the feel is exclusive and VIP. In fact, potential customers are urged to make reservations for a Peloton tutorial rather than simply stop by like a normal citizen. Some spots even sell "Peloton Boutique apparel".

If that sounds a lot like Tesla's retail strategy, that's because that's exactly what it is: set up showrooms in high-income areas, create a sense of FOMO luxury, and deliver the units with white gloves.

The next expensive coat rack?

Peloton has one thing no home exercise company has had yet: a dedicated online community with a cult-like following. That much has been proven. But as new years resolutioners burn out, and other riders want to get outside, will Peloton's gains this year turn into backlash?

Of course, only time will tell, but this amusing Twitter thread from user @ClueHeywood went viral at the end of January 2019, and it pokes some pretty wide holes in the Peloton pastiche. If anything, it shows that, at the end of the day, exercise is exercise, and the gear and vanity of exercise, while sometimes great motivators, are just that.