The ambitious, bold and hungry start their week with The Business of Business!
Markets
5.7.19   11:15 AM Markets

Valiant's Hansen sees 4-5x returns on Zillow with move into iBuying; our data suggests he may be right

Zillow ($ZG) is getting away from simply being a platform on which homes are sold and into an active participant in the marketplace.

That has Valiant Capital Management founder Chris Hansen extremely bullish on the online homes sales platform that has simultaneously done a better job of keeping its users happy as Zillow prepares to take on big real estate brokers.

Zillow is scaling its 'iBuyer' business, through which it uses an 'automated valuation model' to determine the worth of a seller's home - and then, Zillow buys it. The company may originate new mortgages, but it isn't investing in them, Hansen said - instead, they're picked up by a third party that finances the transaction.

"The scale of opportunity, we think, is enormous," he told attendees of the Sohn Investment Conference in New York City on May 6. Hansen said the stock could rise four to five times its current price level as Zillow builds scale in new businesses that complement its online home platform - including mortgage origination and lead generation. The company is also getting into minor maintenance and repairs - carpeting, painting, landscaping - that can help it boost margin, Hansen said.

Indeed, the company is busy hiring for its internal brokerage, with job openings for its Zillow Offers team on the rise.

Meanwhile, company is well-liked - literally. Zillow and ancillary properties Trulia and Streeteasy have watched their Facebook ($FB) "likes" tally shoot up over the last couple of years.

And the proof is in the ... ratings: Zillow has also seen its app garner better ratings, coinciding with the same timeframe on which consumer approval appears to have grown, according to our data.

Hansen said in his presentation that Zillow has become a dominant player in the online sales market, with 72% - but taking up a position selling homes puts the company in position to boost margin with relatively limited exposure to potential downside in the housing market, should homes prices drastically fall. It hasn't yet launched iBuyer nationwide - instead, working city-by-city to develop the application's presence. This includes markets like Houston, Denver, Atlanta, Denver, Charlotte and Phoenix. In his presentation, Hansen shared a slide that explains how quickly Zillow's iBuyer program has scaled in Phoenix. 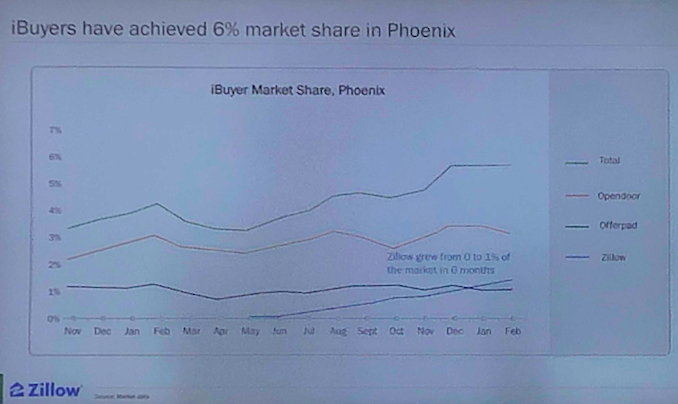