Despite promises to crack down on price gouging, Amazon's 31st most-popular gaming item is now selling for more than twice its intended retail price.

Last week we reported that Amazon ($AMZN) marketplace merchants were taking advantage of a Nintendo ($TYO:7974) Switch shortage in the midst of a global pandemic that has people stuck at home and looking for diversions.

Based on nearly 100,000 product listings at Amazon that we analyzed, we reported that the average price of the $299 game console was running $462. But since then, things have gotten worse for those looking for a Switch: As of today, the average Nintendo Switch now goes for an average $469 and, in most cases, much more than that.

The continued price gouging comes after Amazon assured our friends at Digital Trends that it was implementing "additional measures to keep prices low" and that its "global teams are working 24/7 to monitor prices in [its] store."

It seems, though, that it's done little to nothing about the Nintendo Switch issue. As of today, new Nintendo Switch consoles are going for as much as $649 — more than twice the $299 retail price — across dozens of vendors.

This isn't a story of scarcity, either, at least at Amazon. While other retailers are sold out of the Switch, Amazon's third-party vendors appear to have plenty in supply. In fact, because of the large number of vendors selling Switches at increased prices, the product continues to be a best-seller at Amazon. As of April 5, it ranked the 31st-most popular product in the site's Video Games category. 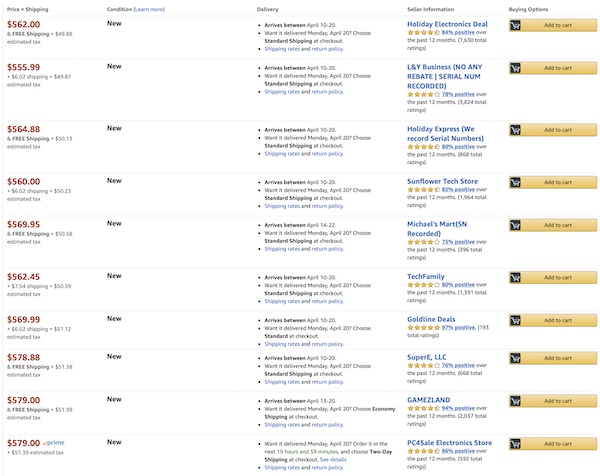 It's unclear what measures Amazon has put in place, but it's had at least a week to do something. The vendors selling price-inflated Switch consoles aren't new, either: most have thousands of positive reviews over the past 12 months.

Amazon's third-party marketplace includes thousands of resellers, so it's understandably difficult terrain to police, but high-ticket, high-demand items like the Nintendo Switch would seem to be somewhat easier to monitor than, say, toilet paper and face masks that have massive variety in product name, description, and origin.

In the case of The Switch, there are just a couple of variations, all at the same retail price, all sharing the same product SKU on Amazon.