The ambitious, bold and hungry start their week with The Business of Business!
3.3.21   8:00 PM Innovation

A Nike VP just resigned following a sneaker reselling scandal. Sneakerheads see it as a symptom of a larger problem with Nike's secondary market.

19-year-old Joe Hebert’s business has been booming. The sneaker reseller’s online store, West Coast Streetwear, has over 60,000 followers on Instagram, and Hebert, also known as West Coast Joe, regularly makes six figures in a single month by selling on Nike’s SNKRS app. There’s only one problem: his side hustle cost his mother her job as an executive at Nike.

Ann Hebert, who served as a VP overseeing Nike’s North America business, resigned Monday after a Bloomberg profile of her son made it apparent he had been using her credit card to run West Coast Streetwear. Ann, who had been with Nike for over 25 years, allegedly didn’t violate company policy and even told Nike about her son’s business, the company said. The fiasco made waves in the sneaker community, but sneakerheads see it as the latest in a series of issues relating to the way Nike handles reselling.

Nike’s SNKRS app ratings, for example, are mixed. While most users have left five star reviews, a quick glance at the app’s most recent reviews yields plenty of one star ratings. Many of those ratings complain about bots on the app, the inability to bid on sneakers that sell out instantly, and app glitches. 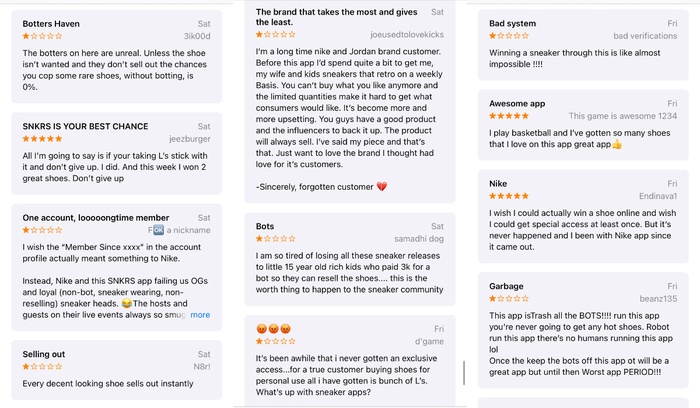 “The convenience of the app is great, but you probably have a better chance of winning the lottery than getting a pair of well sought out sneakers,” one user wrote. “It’s ridiculous...the amount of bots that use this is insane!”

“Unless you have a bot to complete a transaction in less than a millisecond, don’t even waste your time,” another wrote.

Despite the negative reviews, app store ratings are going up.

The SNKRS app currently has a 4.8 rating with 608,000 reviews, a steady increase from the 423,000 reviews it had last April, according to our data. The pandemic has been good for sneaker resellers. Joe Hebert told Bloomberg that his profits tripled when the stimulus checks landed in bank accounts. And Hebert is one of the reasons sneakerheads are so dissatisfied with the app.

For starters, Hebert’s business model involves gaming Nike’s system using bots and a group of fellow resellers who coordinate their efforts on Discord — common practices among the most successful resellers. Bots are used to target the hottest sneakers on the SNKRS app and buy them in high quantities, only to sell them for higher prices. When reseller groups buy hundreds of sought-after shoes in one go, the average consumer — presumably Nike’s target audience — misses out.

However, Hebert isn’t engaging in illegal activity. Nike intentionally makes it hard to buy some of its shoes, creating an engineered scarcity model first made famous by brands like Supreme. When a new shoe drops, the hype is fueled by the winners and losers on social media — those who secured a pair flaunt them. The ones who complain weren't fast enough. And many of Nike’s drops are exclusive to SNKRS, further fueling the hype.

Many sneakerheads called out Hebert online, speculating that his mother’s ties with the company — which included overseeing the SNKRS app — helped him get a hold of exclusive products or information about upcoming drops. While there’s no evidence that Hebert received insider information, he’s already at a considerable advantage. With the use of bots, a network of resellers, and even a Eugene, Oregon warehouse, West Coast Joe isn’t likely to stop selling anytime soon.