The ambitious, bold and hungry start their week with The Business of Business!
Innovation
10.22.18   2:21 PM Innovation

The Saudi Arabian government recently put a billion dollars into Lucid Motors. Here's who they are hiring and what their traction looks like.

Earlier this month, California-based electric car startup Lucid Motors ($PRIVATE:LUCIDMOTORS) locked in a billion-dollar infusion from the Public Investment Fund of Saudi Arabia. Through this deal, the official sovereign wealth fund of the Saudi government is helping to put Lucid on track to produce its first commercially available electric vehicle, the Lucid Air, on the market in 2020, thus putting it in direct competition with Tesla ($TSLA).

Since announcing its deal on September 17, Lucid listed more than double the amount of job openings month-over-month, which is understandable given a billion-dollar influx in capital.

Nearly every single one of these jobs are in its main location of Newark, California, with only two openings — one for an Electrical Engineer and another for general applications — listed for its future Casa Grande, Arizona factory. 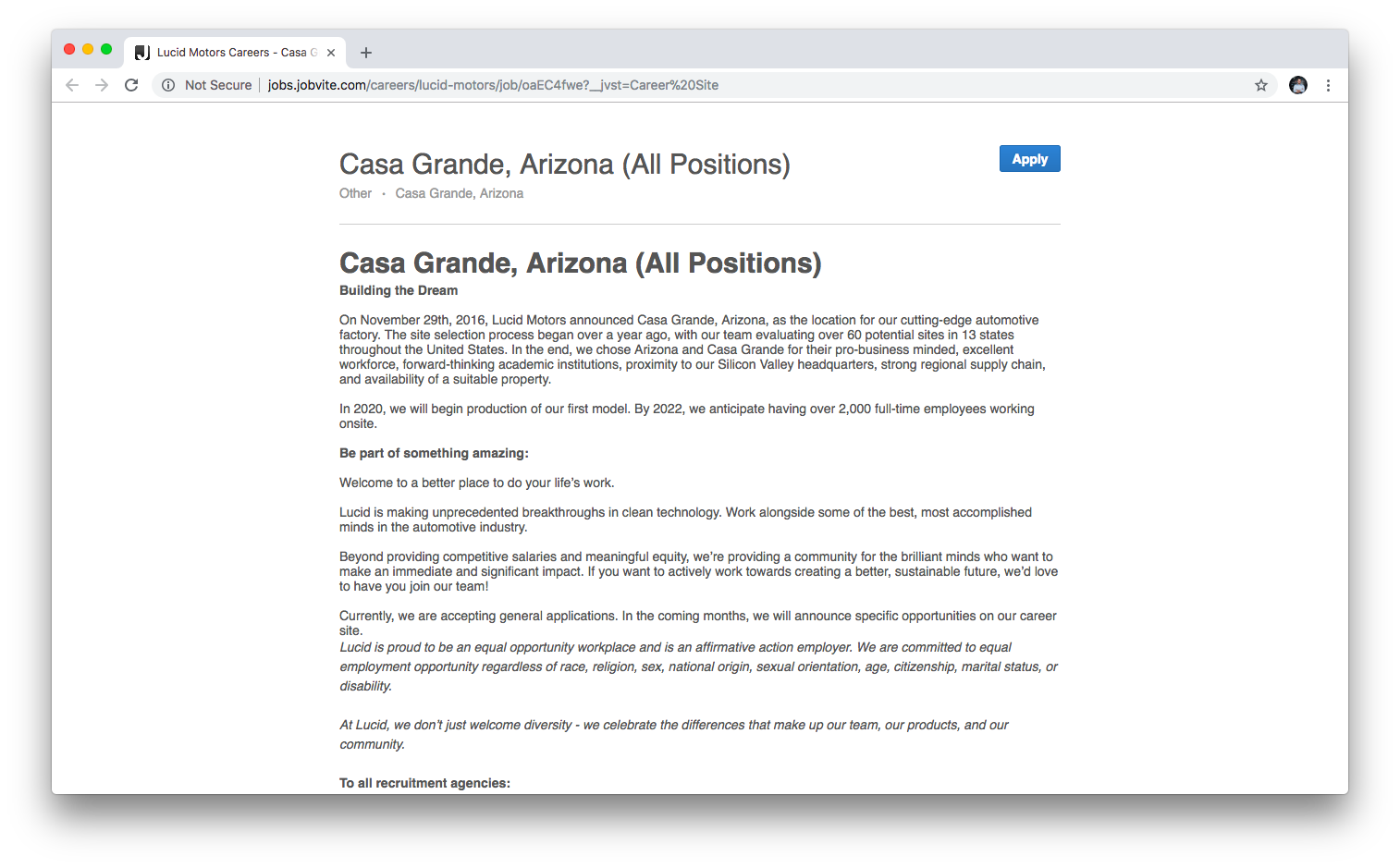 In Newark, Lucid is not only hiring more engineers, but also expanding into the next step of its development process: design and supplies to build its first commercial vehicle fleet. On September 17, the day it announced its deal, Lucid wasn't even hiring anyone to manage Supply Chain operations. Today, it's looking for 15 people for a variety of positions, such as Global Supply Managers and Supplier Quality Engineers.

And, more importantly for its workers, it's looking into a Human Resources administrator to manage benefits and payroll.

Interest in the company is also growing steadily; while not at the level of Tesla's gigantic social media reach, Lucid saw a follower spike in the days after it inked its billion-dollar deal, as well as in the beginning of August.

Its web traffic can be described as widely inconsistent, however. When tracking its unique visitors, its largest days of viewership were on days with huge announcements, such as the Saudi Arabia deal and the reveal of the Lucid Air on December 14. Essentially, this means people are caring about what's new with the company, but don't seem to be exploring it — read: interested in seeing how to pre-order its cars — as much as on Tesla's website.

Of course, with recent controversy over the death of Washington Post journalist Jamal Khasoggi and reactionary protests by companies over Saudi Arabia's upcoming Future Investment Initiative summit, Lucid has kept quiet about whether it would still attend the conference and about its recent investment. Given that the conference is still happening later this week — albeit without a few — Lucid may be in the spotlight if one of its chief executives rubs elbows with Crown Prince Mohammad Bin Salman Al Saud.