The ambitious, bold and hungry start their week with The Business of Business!
Innovation
12.20.18   3:12 PM Innovation

Tesla-rival Lucid Motors hiring is up 300% since Saudi investment

With $1 billion in cash from the Public Investment Fund of Saudi Arabia, Lucid Motors is hiring up a storm to take on Elon Musk's Tesla Motors. Here's where they're at.

Last fall, California-based electric vehicle startup Lucid Motors ($PRIVATE:LUCIDMOTORS) picked up a massive billion-dollar investment from the Public Investment Fund of Saudi Arabia. We reported on the deal last month, nothing that Lucid had embarked on a massive hiring spree. At the time, Lucid had already doubled the number of openings at the company.

As of today, however, openings at Lucid are now up more than 300% since the capital infusion.

In October, Lucid Motors was hiring around 50 people. Today, it lists 180 openings across multiple categories. 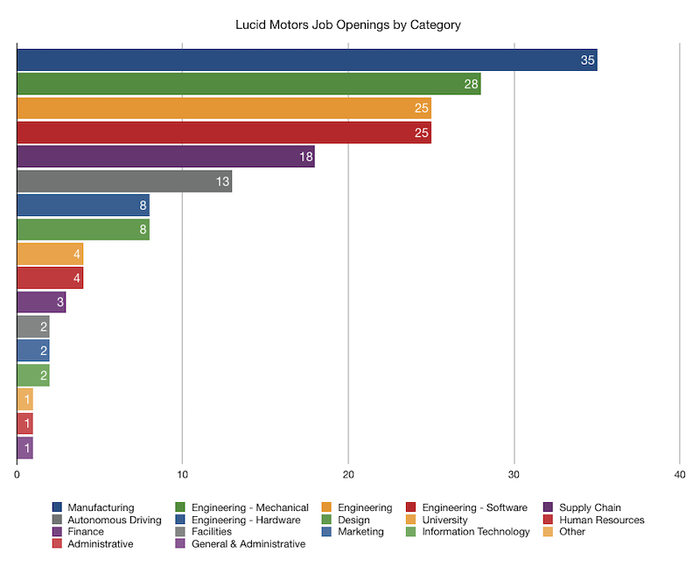 The most common category of job openings at Lucid is for Manufacturing followed by Mechanical Engineers. A brief look at the overall nature of Lucid's openings and it's clear that the company is quite busy building its Tesla-rival sedan.

[Dataset is here for subscribers]

This news also comes in the wake of massive layoffs at General Motors. Interestingly (ironically?), GM says that its labor-force divestments are due to a new focus on autonomous and electric vehicles. So far, however, there has been little to no hiring at GM to indicate that is, indeed, a fact, however.

It's still too early to say if Lucid Motors will pose a threat — or become a rival at all — to Tesla, Elon Musk's EV company that has a major head start and, for scale comparison's sake, it currently hiring more than 2,300 people. Compared to Lucid's 80 openings, one can see where the two companies differ in their life cycles. Tesla is already busy servicing second-time customers while Lucid hasn't put its first vehicle on the road just yet.