Top retailers are doubling down on staffing initiatives as holiday shopping season approaches - and, then some.

TJX ($TJX) topped earnings expectations, pleasing analysts, and making bullish projections for Q4. Holiday hiring - which saw the retailer look to add thousands of extra staffers, in the chart pictured below - was another positive tell for the Massachusetts-based clothing retailer.

"[W]e are excited about the initiatives we have planned to keep driving sales and traffic during the holiday season and beyond," Scott Goldenberg, TJX CFO, said on its earnings call November 19.

TJX isn't alone - plenty of other top retailers are doubling down on staffing initiatives as holiday shopping season approaches, as some retailers confront one of two realities that appear to be guiding the brick-and-mortar consumer space.

One, is of companies with a growing footprint, successful examples of marketing, and a rising pace of seasonal hiring that's aimed at satisfying rising consumer demand. And, the other, is a tale of legacy businesses struggling to catch up with a digital marketplace, sometimes casting off senior, salaried staff behind the counter, and also in need of a few more hands at the holidays to deal with what's nevertheless a growing pace of foot traffic. 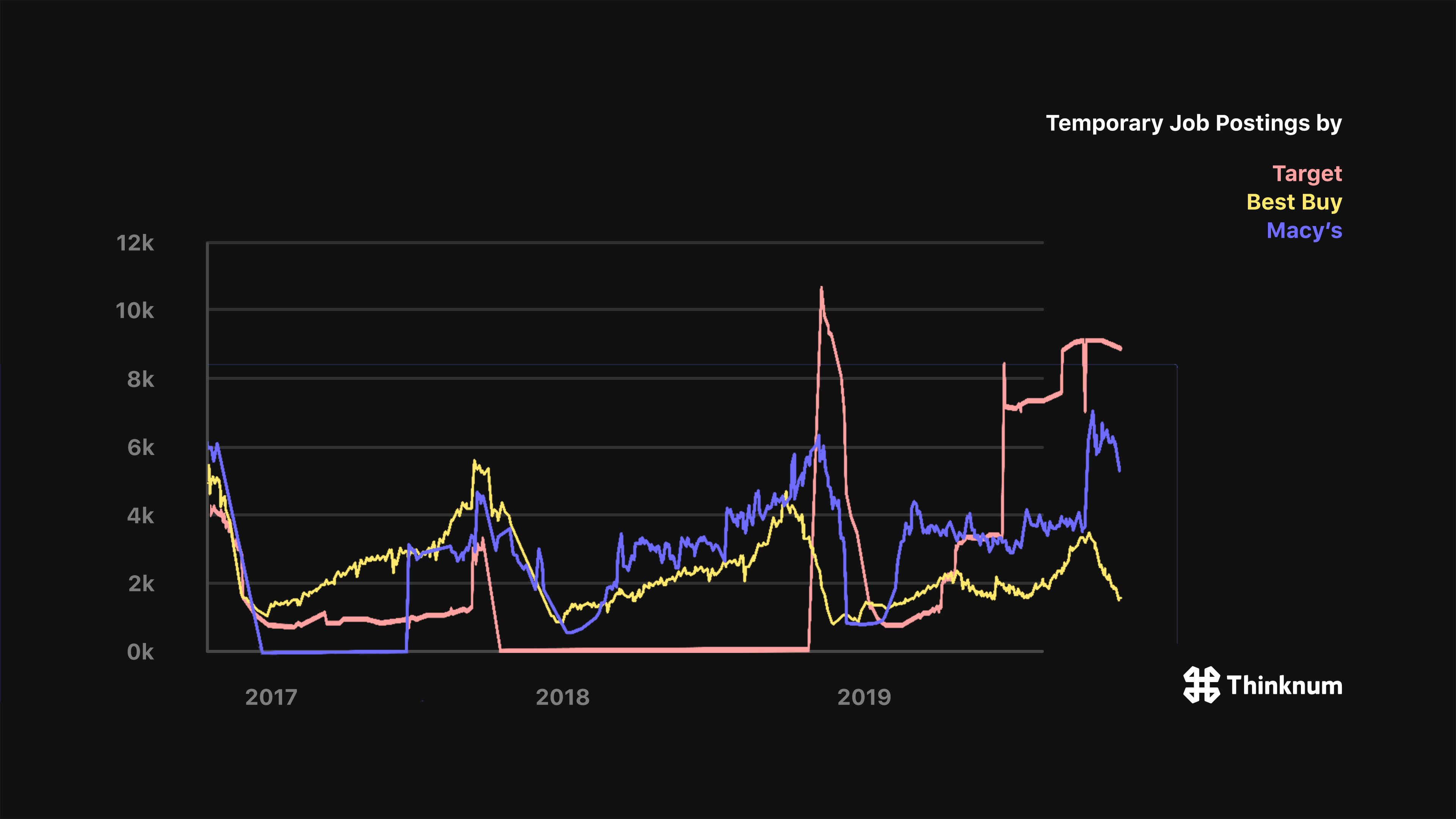 Macy's an example of the latter. Yes, the retailer's holiday job postings hit a four-year high, according to the chart above. However, the department store chain continues to shut down stores and let go full-time staffers in a bid to reverse 2019's stock slide.

Other retailers have a brighter story.

Target ($TGT) is also pictured on the black chart, above, and has been adding thousands of seasonal staff job postings, in the same year it grew its store count. Target's rosy fourth quarter outlook (which followed a big earnings beat last week) is supported by this data. Other retailers with rising seasonal retail staffing needs, that also matched better-than-expected earnings figures, include Gap ($GPS) and JC Penney ($JCP).

Further still, we can tell from the chart below - that while Macy's foot traffic, judging to Facebook ($FB) Were Here Count, far outpaces other legacy players in the space - engagement has begun to plateau. It's not the only store beginning to worry about core shoppers' engagement starting to level off - it's safe to say Saks has similar worries.