The ambitious, bold and hungry start their week with The Business of Business!
Innovation
11.5.21   6:29 PM Innovation

Here’s what we know about Mastodon, the open-source software Trump is accused of plagiarizing

The former U.S. president’s social platform Truth Social isn’t set to roll out until next year, but leaked screenshots of the beta version show a nearly identical interface to Mastodon.

Two weeks ago, Donald Trump confirmed long-teased plans to launch his own social media network. Truth Social promises to rival “the liberal media consortium and fight back against the Big Tech companies.”

However, a decentralized, open-source social media software provider called Mastodon is threatening to sue the former U.S. president’s new social platform for trying to pass off its free product as a whole new app — and as its own proprietary technology.

Unless you’re an alt-tech enthusiast, you probably only associate the term “Mastodon” with a metal band, or perhaps a prehistoric mammal. We’re here to answer your questions about Mastodon and how it got tangled up in this controversy.

Mastodon was founded in 2016 by a German coder named Eugen Rochko. It’s among a wave of social media projects that have sprung up in the last several years as alternatives to Twitter and Facebook, which have long drawn complaints about polarized discourse, harassment, inconsistent moderation, and a business model of selling user data to advertisers. “No ads, no corporate surveillance, ethical design, and decentralization!” Mastodon says on its Twitter bio.

One of Mastodon’s most prominent features is a clear and simple rule: “No Nazis.” Mastodon’s main server (more about its different servers later) prohibits “all content illegal in Germany” which includes Nazi symbolism and Holocaust denial. Meanwhile, everything from its cheerful mammoth icon to its comical term for posting (“tooting”) to its 500 character cap, is designed to differentiate Mastodon from major social media. Today, it’s considered one of the most mature and user-friendly of the new breed of decentralized social offerings, with 2-3 million users.

How does it work?

Mastodon isn’t really a social media platform but rather, a codebase that anyone can use to create their own social media network. As such, Mastodon includes thousands of independent online websites and servers called “instances.”

There is no Mastodon app. Rather, every logs onto the specific instance that they’re a part of via any of a number of compatible third party apps. The first Mastodon forum was the aforementioned (Nazi-free) flagship server called mastodon.social, but others include memetastic.space (memes), securitymastod.one (information security), fern.surgeplay.com (Minecraft) or gay.crime.team (LGBTQ).

However, all instances can be integrated with one another. Every user interface shows users both a “local” timeline of posts exclusively from their home instance, as well as a “federated” timeline that shows you all the users you’re connected to across instances.

What’s going on with Truth Social and Mastodon?

Truth Social isn’t set to roll out until next year, but leaked screenshots of the beta version show a nearly identical interface to Mastodon, suggesting that Truth Social is really just a Mastodon instance. 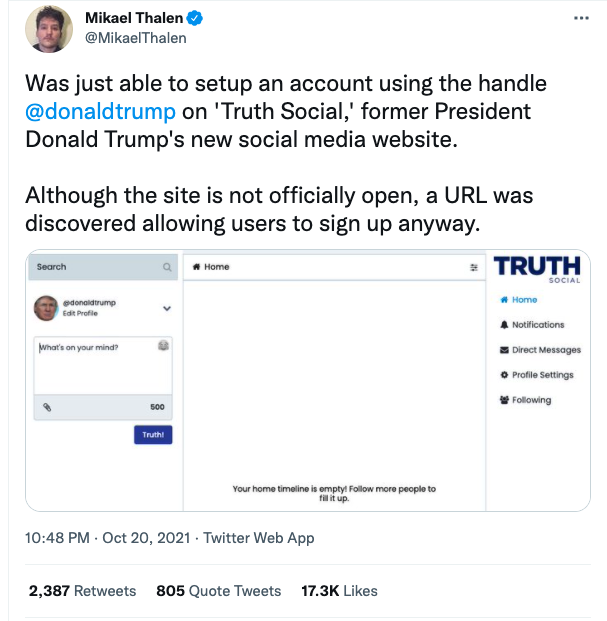 In addition, there were indications that Truth Social’s metadata includes HTML references to Mastodon.

Mastodon is a free codebase that anyone can use to create a network. However, Truth Social is claiming that all its source code is original and proprietary. Below is a screenshot of Truth Social’s Terms and Services page:

Rochko’s complaint, as he explained in a post on Mastodon’s website is that, “neither the terms, nor any other part of [Truth Social]’s website contained any reference to Mastodon, nor any links to the source code, which are present in Mastodon’s user interface by default.” Mastodon’s code is published under the Free Software Foundation’s AGPLv3 license, which requires all users to make the source code and any modifications free and publicly accessible.

Why would Trump use Mastodon, if it’s a left-leaning, “woke”-friendly network?

Mastodon has been touted as a means of creating a less toxic version of Twitter, and has been lauded for its robust privacy features to prevent targeting and harassment. Many instances — like mastodon.social’s no-Nazi policy — hold users to strict moderation policies. However, while instances make their own rules, Mastodon is a free software, accessible to anyone and its instances are designed to be completely independent. Because of this design, not even the founder or moderators can shut down Mastodon servers.

Right-wing communities have taken advantage of this feature in the past. In 2019, self-described “free speech” platform Gab (known for its far-right and extremist user base) moved to a Mastodon forum after being banned from the Apple and Google Play stores and kicked off by GoDaddy, its web host. While Gab goes against Mastodon’s ethos, because it  simply implemented Mastodon’s open-source code, there was no way for the moderators to shut it down. In addition, since users log into Mastodon servers via host apps, Gab was able to overcome app-store bans.

Although Rochko couldn’t remove Gab from Mastodon, he did attempt to isolate and demote the network. Mastodon only lists instances that follow the Mastodon Server Covenant, which requires servers to actively moderate against “racism, sexism, homophobia, transphobia.” In addition, a number of the compatible apps that host Mastodon servers blocked Gab.

Web hosts and the app stores have been cracking down on extremist content. Right-wing platform Parler, which was linked to the Jan. 6 riot at the U.S. Capitol, was kicked off Amazon Web Services in January, plus the Google Play and App stores. It returned to the App store in May with new content agreements, but it was crippled by its excommunication: It kept only 4% of its previous users.

Trump and his team may have anticipated that a typical app might meet the same fate as Parler, by drawing too many extremist users and hate speech. As such, it appears Trump is proactively mimicking Gab’s strategy of circumventing Apple, Google and the major web hosts.

What is Mastodon doing about this?

On Oct. 26, Mastodon sent a letter to Truth Social’s chief legal officer giving the network 30 days to make the source code publicly available, in compliance with its license. If Truth Social doesn’t comply, Mastodon said it would sue Truth Social to revoke its right to the code.

Truth Social might have had no issues operating as a Mastodon forum, if only it hadn’t misrepresented its use of the software. Rochko wrote in his blog post, “as far as personal feelings are concerned, of course we would prefer if people so antithetical to our values did not use and benefit from our labour, but the reality of working on free software is that you give up the possibility of choosing who can and cannot use it.” Truth Social has given Mastodon the perfect out.