The ambitious, bold and hungry start their week with The Business of Business!
Markets
10.25.18   4:19 PM Markets

As casual dining faces new challenges from the fast casual industry, Applebee's is leading the pack... For now.

American casual dining was born out of a post-World War II economic boom. Families were growing and moving out to the the suburbs, and the concept of "dining out" grew among the middle class who could afford the occasional luxury of not cooking that night's dinner.

At the same time, the term "happy hour" moved out of the U.S. Navy, where it was used to describe downtime activities for sailors, and became a civilian term for post-work drink and food specials.

Each of these three casual dining chains are all part of a similar market. They are found all over America, serve up similar menus, and offer their own inexpensive food and drink specials.

So who's expanding? Where are they in relation to one another? We took a look.

We call it, the "Happy Hour Showdown" or the "War of the Restaurants that Millennials are Killing" (or not). 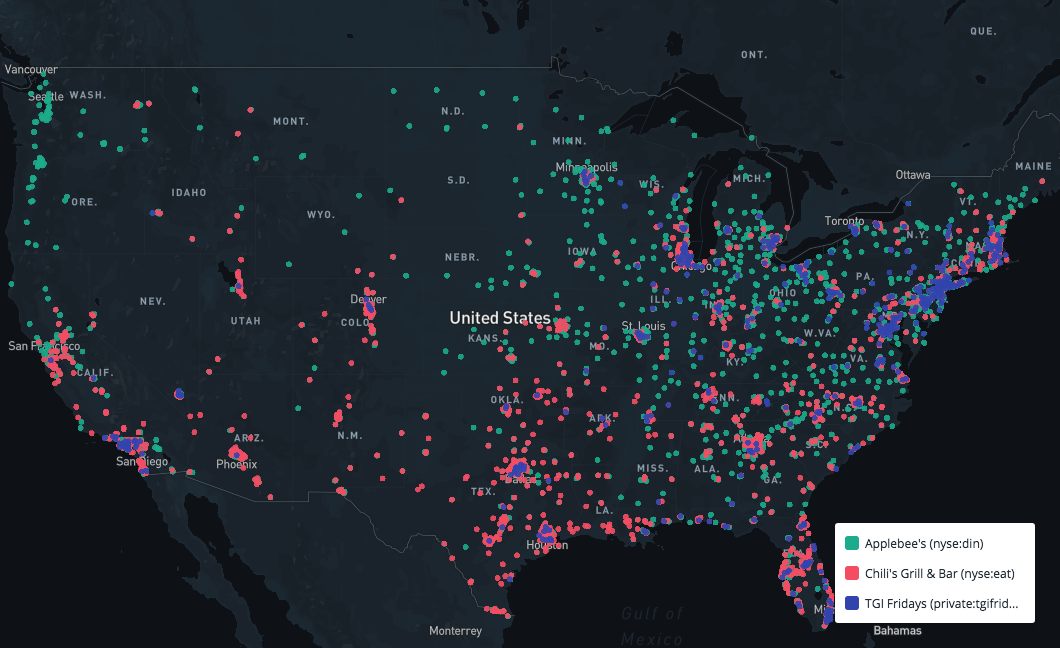 In the United States, Applebee's has more restaurant locations than TGI Fridays and Chili's combined. This comes despite Applebee's being founded later than both brands, as the chain did not open up its first location — then called  T.J. Applebee's Rx for Edibles & Elixirs after founders T.J. and Bill Palmer — until November 19,1980. Meanwhile, Chili's already had double-digit restaurants, and Fridays' far outgrew its original purpose of getting its founder, Alan Stillman, a hot date to start franchising across the country.

Applebee's opened up shop right outside Atlanta in Decauter, Georgia. Today, in its own home state, it still has more open restaurants than its two competitors combined - just barely.

Chili's defends its home state just as well as Applebee's does Georgia. The chain founded in Dallas, Texas has double the amount of places where you can get those baby back (baby back baby back) ribs than Applebee's.

The same mantra of "home turf defense" could not be applied for TGI Fridays franchised locations, however. In New York State, there are more Applebee's than there are Fridays restaurants, although it does outrank Chili's by 13 locations.

In fact, there is not a single state where TGI Fridays outranks its competitors in terms of sheer store count. Unfortunately, the only territory it laid claim to — Washington D.C. — is no more after it closed its 2100 Pennsylvania Ave. location earlier this month.

The state of social media

For all three chains, Facebook is an important method of connecting with millions of customers each day.

Applebee's rules the roost when it comes to Facebook as its "Were Here Count" — the number of visits to restaurant locations — as it cracked 27 million tracked posts in October.

TGI Fridays did not start taking advantage of this metric until late last year, as user posts from Fridays locations were not being tagged to where the restaurant was. Since it started using this system, its "Were Here Count" grew at a steady rate.

While its users were checking in to the restaurant more often, however, users were also starting to fall off its page. Earlier this month, the restaurant's Facebook page started a decline in Likes, a trend that might be worrisome if it continues.

That trend has been prevalent on Chili's page since November 2016. Since Thanksgiving of that year, Chili's Facebook page saw tens of thousands of people unlike it, or have their accounts purged from the social media site.

One upside for the chain is that its "Were Here Count" comes only several million under Applebee's, a chain that has double the locations in America.

A potential reasoning behind the decline of these social media brands for these casual dining restaurants could be the rise of fast casual restaurants in America. As all three old casual dining titans look to survive against new challengers like Chipotle, Shake Shack, Panera and hundreds of other big and small chains, Applebee's, at the very least, is leading the pack.