The ambitious, bold and hungry start their week with The Business of Business!
Innovation
3.28.19   7:27 PM Innovation

How Strava, MyFitnessPal, and other fitness tracker usage changes with the seasons

Some people resolve to be more fit in the new year. Others just don't want to be outside. Here's the data as to when fitness trackers are used most.

Getting in shape and remaining so is hard work. It takes dedication, discipline, and an interest in tracking progress. Dedication and discipline require a certain kind of person. Tracking progress, however, can be done by a bevy of available devices and apps, from calories and steps to miles and reps. Even better, we can now track how much fitness-tracking apps are used throughout the year via Facebook login token data.

But there are different kinds of fitness apps. Some allow you to simply begin tracking your fitness and health, like MyFitnessPal, owned by Under Armour ($UA). We call those casual fitness trackers, for the sake of comparison. Those ones, including MyFitnessPal and Fitbit ($FIT), spike in popularity in the new year, when people resolve to get in shape.

But other tracking apps, the more outdoor-dependent trackers like cycling app Strava ($PRIVATE:STRAVA) and running app Nike ($NKE) Plus, rise in popularity along with the friendliness of the weather, as fitness junkies can finally get outdoors for a run or a ride.

Not surprised? Neither were we. But there's a lot of hunch confirmation in the data. Here it is.

A Fitbit Inspire can be had for $69. It's billed as a "friendly fitness tracker for everyday". Positioned for people looking to begin tracking their fitness, it's little surprise that activity via the Fitbit app spikes in the new year. In fact, for the past four new years, Fitbit activity saw major spikes immediately following January 1.

One cautionary note for Fitbit: activity year over year, while it spikes after the new year, appears to be on a general downslope over time, at least in terms of Facebook logins for the device's app.

MyFitnessPal has been the leading calorie tracking app for years. After its acquisition in 2015 by UnderArmour, its popularity has continued to grow. Given the nature of the app — positioned for people looking to turn their fitness lifestyles around — it also sees usage spikes in the new year. Just last year, it soared from the 178th most-popular app to the top 100 in the first month of the year.

If you or someone you love is a cyclist, you've heard of Strava, the cycling app that tracks routes, segments, and gamifies it all in an addictive app that has become one of the most-popular apps — if not the most popular — in the sport. It remains popular today, but its usage graph clearly tracks the most comfortable times of the year for cyclists to be outside.

Since 2018, the most pronounced rises in usage for Strava have been in the spring months and late summer into fall. Ask any cyclist when she or he loves being behind the bars, and they'll tell you that's exactly the time.

If Strava is the go-to app for cyclists, Nike + is the go-to for runners. Sure, many other apps offer excellent run-tracking technology (including Strava), but Nike + was one of the first, and it remains well-regarded by pavement pounders. And, like Strava, its usage cycle spins up in the nicer months and tracks down when the mercury drops.

Lifestyler vs. resolutioners in one graph 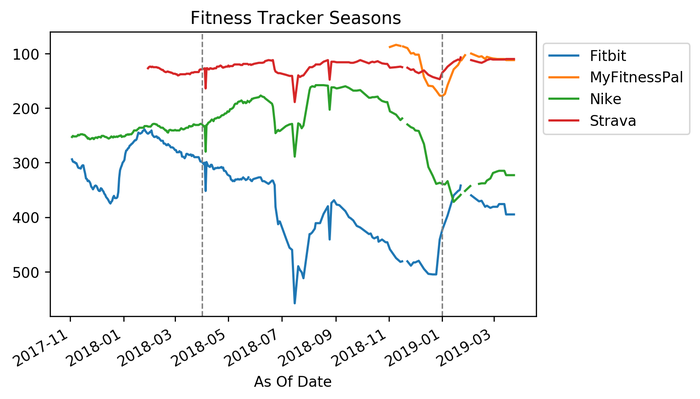