The Epic v. Apple games trial got off to a chaotic start yesterday. But fans that were expecting a slugfest instead got a typical court proceeding.

The fated court battle between Epic Games and Apple over the removal of Fortnite from the App Store is finally here. Almost immediately, it fell into chaos.

Before the trial even began Monday morning, one of the audio access phone numbers was flooded with callers shouting “Free Fortnite” and blasting Travis Scott. Within less than an hour the other line had gone dead, giving way to a boy who used the line to say “Yo Sweeney, dog, you suck.” Meanwhile, The Game Awards streamed the proceedings on Twitch to an audience of thousands. Fans of the two multi-billion dollar mega-corporations took to Twitch and Twitter to flame the other side and root for their favorite LLC to come out on top. Fans came ready for a battle royale. What they got instead was, you know, a court proceeding.

It’s hard to blame them — this is, after all, the lawsuit that Epic Games made an in-game trailer to hype up the announcement of. The company has spent the better part of the year poking the fire and portraying itself as a liberator taking on the big bad Apple on behalf of the little guy. Epic CEO Tim Sweeney has even made “First They Came…” allusions to the litigation. Apple fans aren’t so docile either. Though the company hasn’t gone to the lengths its rival has to market its argument, Apple has droves of fans who defend it and wait with bated breath each year to find out what colors the next incrementally improved iPhone is going to come in. For these people, the product they use is a part of who they are.

But instead of a clash of titans, Monday’s proceedings primarily consisted of opening statements which mostly laid out the predictable arguments we’ve come to be familiar with ever since Fornite first got pulled from iOS. Epic spent its opening statement continuing the liberator narrative with rally cries like “Epic is suing for change.” The company framed Apple’s 30% fee on all App Store transactions — the issue at the heart of the lawsuit — not as a fee, but as a tax. On the other hand, Apple spent its time saying Epic’s specific grievances can’t be used to determine whether Apple is anti-competitive, and painted Epic’s desires as a threat to the security of consumers and developers who rely on the app store.

The outcome of the trial, which could potentially see Apple's 30% fee removed or allow for other app stores to exist on iOS, has the potential to change the tech landscape forever.

“Walled Garden” was one of the most common terms used by Katherine Forrest, Epic’s legal counsel in the case. The extended metaphor was used by Epic in its opening statement to describe Apple’s practice of not letting other stores onto the iOS platform and preventing users who leave from taking things like their iMessages with them. Epic even pulled out an image of the iOS logo obscured by bricks just to make sure you really get it. Look at all those bricks. Do you get it. It’s a walled garden. 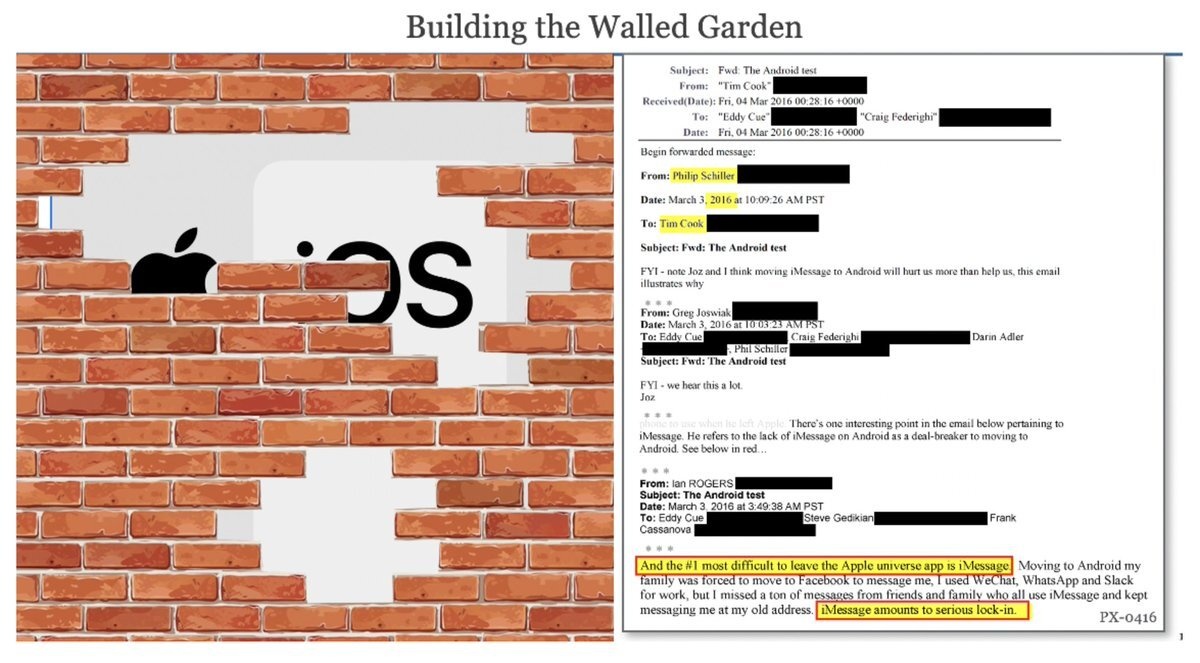 Though it was steeped in the same faux-revolutionary imagery as its lawsuit announcement trailer, Epic’s opening statements nonetheless made a compelling case for the removal of the 30% fee, which is wildly unpopular among developers and founders looking to develop the mobile side of their business.

Despite interruptions due to technical difficulties, Apple’s opening statement came out strong — even if its own crowd-riling language didn’t. Apple’s attorney Karen Dunn argued that Epic’s specific grievance with Fortnite cannot adequately prove that Apple’s general practices, or its 30% fee, are anticompetitive. In other words, “Apple isn’t a monopoly, but even if we were, you wouldn’t be able to prove it.”

Dunn claimed that Apple did not establish the 30% fee on the App Store, but that it became an industry standard set by digital games platform Steam in 2003 — by the time the App Store came around, Dunn argued, Apple just adopted standard practice. Apple also highlighted other digital storefronts which take a similar cut of sales and transactions, and called the fee a “hallmark of competition.”

But what ultimately makes Apple’s 30% fee different from those competitors is the scale of its market. Earlier this year, Apple announced that there were over 1 billion active iPhones in circulation, meaning that Apple is essentially the gatekeeper to a market that makes up nearly one-eighth of the world’s population. Sony, for example, also charges a 30% fee on all Playstation Store transactions — but the total amount of Playstation 4 and Playstation 5s in circulation is only 120 million.

No Way To Play

One pillar of the argument laid out by Dunn was that Epic was able to recover remarkably well from the loss of Fortnite on iOS. Dunn noted that a loophole allowed users to buy in-game currency on one platform and then use it on iOS, meaning the charges were never a significant factor. Dunn also pointed out that once Fortnite was removed from the App Store, users on every other platform the game was available on increased dramatically.

It’s a compelling argument in Apple’s favor. Still, the loss of iOS is not an insignificant loss for Epic; Thinknum data shows that Fortnite had over 6 million App Store reviews at the time of removal.

But what this leaves out, and what is ultimately not very relevant to this case at all, is the consumer. Fortnite is a cultural phenomenon and social gathering hub for many of its young players, and the iOS version made it radically accessible. Now that the game is gone from the App Store and Google Play store, the next best options are all expensive.

One of the cheapest platforms the game is available on, the Nintendo Switch Lite, still costs $200. A Playstation 4 or Xbox One will run you $400, and if you can even find one of the new generation of consoles you’ll be out even more. Gaming is not a cheap hobby, and Fortnite fans who can’t afford another platform are understandably antsy about getting the game back.

Sweeney testified Monday morning after opening statements, having promised a fireworks show. Instead, he delivered a sleepy, muffled testimony during which he spent an hour answering questions like, “You mentioned ‘avatars.’ Can you describe what an ‘avatar’ is?” and “Have you ever heard of the term ‘in-app purchase?’”

The reality is that tech titans meeting in court is boring by design, no matter how dramatic the effect of the outcome. But both companies need a “fireworks show” to keep the pressure on their rival up, so they’re leveraging their customers’ identity. Epic wants to make your iPhone less safe and get special treatment. Apple wants to choke out the little guy and take away your favorite game. Isn’t playing Fortnite fun? Don’t you love your new iPhone? Aren’t you going to defend them?