If you want to save money on a cruise, you may want to click here.

Cruise fanatics like to speak in hushed voices of a phenomenon called "Wave Season" when people and agents book to the most cruise state rooms. According to legend, Wave Season happens between January and March when travelers dream of open seas and sunshine.

But Wave Season has little to nothing to do with how cruises price their state rooms. In fact, January to March tend to be some of the most expensive times of the year on average to book a state room, according to thousands of records from Carnival Cruise Lines ($CCL), the world's largest operator. In our previous report, we found that cruise prices tend to be their lowest in October through the end of the year.

But new data — now that we've seen another "wave season" come and go — suggests that, much like seats in the airline industry, cruise state room prices fluctuate with changes in inventory.

In other words, there is no season at all. Here's what we do know. 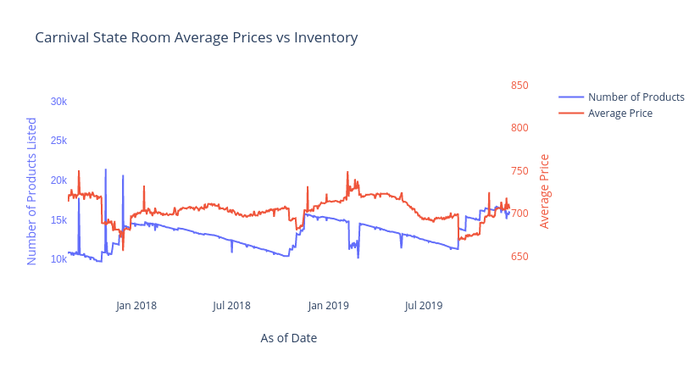 In the past couple of years, the point at which Carnival state room prices reached their lowest was at three very different moments: December 2017, November 2018, and September 2019. At first glance, those three moments share nothing in common. But when compared with state room inventory — listed as "Number of Products" in the graph above — we see that prices sink right as inventory hits its lowest point.

In other words, prices drop as cruise lines look to clear out inventory before new cruises are listed, in an age-old retail "clearance" tactic to move product.

The trend doesn't discriminate by state room type, either: everything from Interior to Suite state rooms follow the same price trend.

This data suggests that while there is fluctuation in state room pricing, a cruise line's need to flush inventory as new cruises are scheduled is the common variable rather than simple seasonality. Given Carnival's leadership role in the cruise industry, it's highly likely that this trend follows for other lines.