The ambitious, bold and hungry start their week with The Business of Business!
Markets
5.18.18   2:31 PM Markets

Despite a favorable brand image, Renaissance hotels has been on a bizarre Facebook follower slide for two years.

Renaissance Hotels, the up-market brand now owned by Marriott ($MAR), is on an inexplicable and precipitous slide... when it comes to Facebook likes. In December, 2015, Reanaissance's Facebook page was nearing a coveted 1,000,000 likes when it began a dramatic and steady downslope. As of today, the page is at 893,000 likes and still sliding.

Usually, social-media declines of this magnitude can be traced back to negative news events that led to changes in public perceptions. But a search for such announcements or news related to the brand only reveals a recent opening in Poland that garnered positive press and an announcement that it is going through a brand update that promises hotels that will be more reflective of the neighborhoods in which they're located. 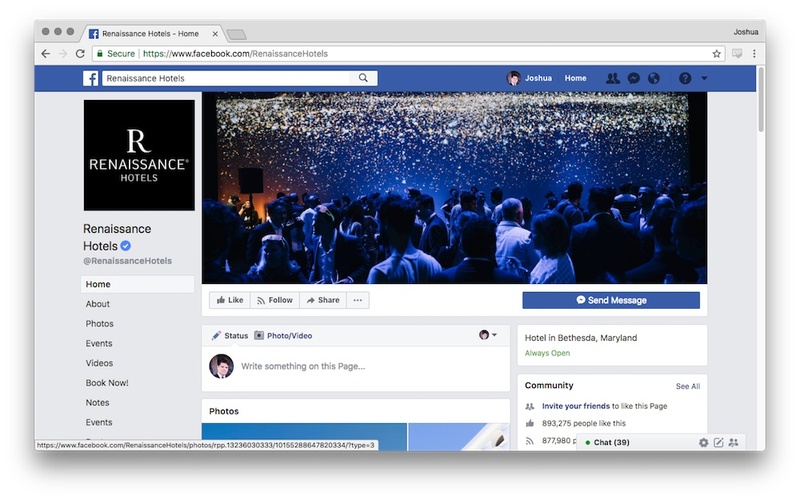 But nothing explains the two-and-a-half year slide on Facebook. Keep in mind that a loss of Likes on Facebook means that users are manually "Un-Liking" a page, so this is not just a matter of attrition or apathy. To be clear, it's a big deal for the company's marketing team.

It's also not part of a larger trend. In fact, Renaissance's other metrics don't appear to be on a slide.

Its "We're Here" count, which measures foot traffic, has been on a steady incline as well.

The brand's Twitter follower count appears to be healthy, as well.

If this was part of a larger trend of apathy for hotel chains on Facebook, the dip in Facebook followers for Renaissance would make sense. But data for other hotels - mother-brand Marriott included along with other up-market Marriott brand Ritz Carlton, don't corroborate that premise:

Similarly, Hilton hotels has been on a steady upslope during the same time period:

Explaining a Facebook slide like the one Renaissance is seeing is difficult in this case. If the brand had abandoned the page, that could explain users un-liking it. But as of this story posting, the most recent post on the Renaissance Facebook page was just two days ago. The quality of the posts is good as well, with well-produced videos and photography promoting events and hotel openings.

It could also be that with its new local strategy and Facebook pages for individual hotels like the one Renaissance recently launched for Renaissance New York Midtown, audience for the main page would thin out. Even if that were the case here, the fact that this steady decline began over two years ago doesn't really help explain what's happening.

In other words, it doesn't appear as thought Renaissance is doing anything wrong with its Facebook page. It's possible that the company paid for thousands of followers years ago, and as Facebook cleans up fake accounts, the Renaissance page is seeing the drop. But if that were the case, it would probably be reflected in other sister brands, which it isn't.