The ambitious, bold and hungry start their week with The Business of Business!
Innovation
7.31.18   1:29 PM Innovation

The origin stories of big three in streaming, and how they're performing now according to the data.

A decade ago, if you told me I would not have cable TV or a radio in my house I’d have laughed at you. Today, I stream television shows and movies via apps on my Fire Stick. I listen to music on Spotify and Apple Music and SiriusXM. I am one of the many people who have “cut the cord.”

This got me thinking: how did streaming become so popular? How did Netflix go from a DVD rental-by-mail company to the leading streaming service and award winning producer of content? How do the major streaming services match up when it comes to social and hiring data?

Here are their stories.

Google ($GOOG) acquired YouTube in 2006 for a then-unprecedented $1.65 billion. It has proven to be Google's most lucrative purchase yet. YouTube was founded by Chad Hurley, Steve Chen, and Jawed Karim who met while working for PayPal. Hurley was a designer while Chen and Karim were engineers. On February 14, 2005 the trio bought the YouTube domain name and began building the site. A beta site launched in May 2005. After a few successful months of operation, the trio put together a proposal for Venture Capital firms and eventually landed $11.5 million in funding from Sequoia Capital to get the business off the ground.

YouTube really became known to the public in December 2005 after Saturday Night Live aired its first video short called “Lazy Sunday.” It aired at the very end of the episode, which also was the season finale. At the time it seemed like no one at SNL had very much faith in that video short. They could not have been more wrong. 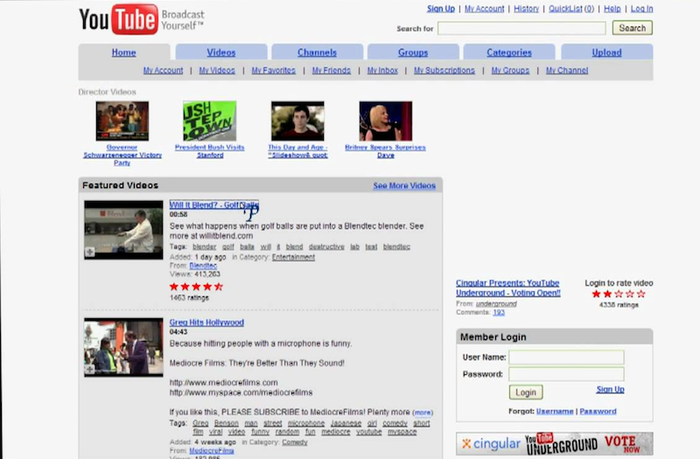 The next day, everyone was talking about that SNL rap video. It wasn’t being replayed anywhere on TV. The only way to try to find the clip to watch was to Google “SNL rap video,” “Lazy Sunday SNL,” or “Chronicles of Narnia SNL.” The very first result on Google for each of these searches was a link to the video on YouTube. And just like that, the whole world was introduced to sharing videos on YouTube.

This extreme amount of attention created a bit of a problem for YouTube. The company was hemorrhaging money on its bandwidth expenses —expenses that were growing very quickly as it grew in popularity. On top of that, the company had no revenue streams — and no strategies for creating them. During the first six months of 2006, YouTube was reportedly spending $1 million a month on bandwidth costs alone. The $11 million in VC funding was long gone. At that point they were heading towards certain disaster.

Another issue plaguing YouTube's early days was that the vast majority of videos being uploaded were copyrighted material. Many industry analysts were convinced that YouTube would inevitably be sued into irrelevance by the movie studios, networks, and record companies.

YouTube was basically one lawsuit or one bandwidth bill away from going under when Google stepped in and saved the day. On October 9, 2006, Google purchased YouTube for $1.65 billion in stock. Sequoia Capital earned $500 million for its 30% stake (off an investment of $11.5 million).

Within two days of acquiring YouTube, Google’s stock price increased by $2 billion — more than the whole cost of buying YouTube. Within a few months, YouTube became the second-largest search engine in the world behind Google itself.

Today, more than 1.3 billion people use YouTube per month. 300 hours of video are uploaded to YouTube every single minute. Almost five billion videos are watched on YouTube every day.

There’s an old story that says Reed Hastings got the idea for Netflix ($NFLX) after he was forced to pay a late fee at Blockbuster. That sounds like a great story, but it isn’t true. Reed Hastings and Marc Randolph launched Netflix in 1997 with a $2.5 million initial investment — a chunk of which came from Randolph’s mom. The founders intended Netflix to become the media equivalent of Amazon. VHS tapes were still expensive in 1997 and DVDs were not widely used, but Hastings and Randolph decided to take a chance on the technology anyway. They also envisioned a website where movie watchers could order with a click of a mouse. But for the time, for $20 a month, subscribers could rent an unlimited number of DVDs, one at a time. The DVDs arrived in the mail in the now iconic red envelopes.

Three years later, Netflix was losing money. Hastings flew from San Jose to Dallas for a meeting with Blockbuster who at the time had 7,700 stores worldwide renting mainly VHS tapes and selling microwave popcorn.

Hastings was convinced that eventually movies could be rented more conveniently by streaming them over the Internet. However, technology was not quite there yet in 2000 when he met with Blockbuster. The company had only 300,000 subscribers and it was relying on the USPS to get its movies to customers.

So, seeking a lifeline, Hastings approached Blockbuster with an idea. He wanted Netflix to become Blockbuster's streaming service. He proposed that Blockbuster buy a 49% stake in Netflix and absorb the Blockbuster name.

The price for that 49% stake? $50 million. Blockbuster passed.

Hastings wasn't one to take no for an answer. After getting rejected once, he went back to Blockbuster at least three more times to pitch the deal. Blockbuster declined every time.

Why was Blockbuster so arrogant? First off, the crash of the tech bubble hadn't quite begun to unravel at the time. Secondly, traditional brick and mortar companies still did not believe digital media posed a serious threat to their businesses. In 2000, most Americans still used dial-up internet access at home. The age of the DSL and Broadband had not yet fully exploded. Therefore, how were they possibly going to stream an entire movie? And besides, people wanted to watch their movies on their giant 32-inch TVs.

Undaunted, Hastings flew back to California and got back to work promoting Netflix. Four years later, Blockbuster launched its own subscription service, but by then, it was too late. Hastings has admitted that if Blockbuster had launched their own service even two years earlier, they would have driven Netflix out of business. 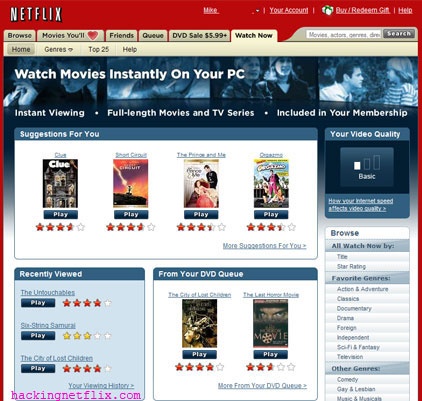 Netflix introduced streaming services in 2007. In 2013, “House of Cards,” the first Netflix-produced show premiered. Today some of the world's most beloved shows — including "Orange Is the New Black," "Bloodline," "Stranger Things, and "Master of None" — are Netflix productions.

Netflix now has more than 120 million subscribers. There is one Blockbuster store left in existence in Bend, Oregon.

Netflix paved the way for other streaming services.  On October 29, 2007, Hulu.com launched as a private beta site. It was a joint venture between AOL, Comcast, Facebook, MSN, Myspace, and Yahoo. NBC was one of the first content distributors to join. Fox quickly followed suit. Hulu launched to the public in the U.S. on March 12, 2008.

Unlike Netflix, Hulu ($PRIVATE:HULU) doesn’t have a terribly interesting story when it comes to its founding. Simply put, when it comes to Hulu's birth, a bunch of Hollywood executives saw the potential in streaming. They saw a way to make money off making older television shows (and eventually newer ones) available. They were right. As “cutting the cord” has become more and more popular, Hulu has evolved to a service where you can watch current episodes of television shows. 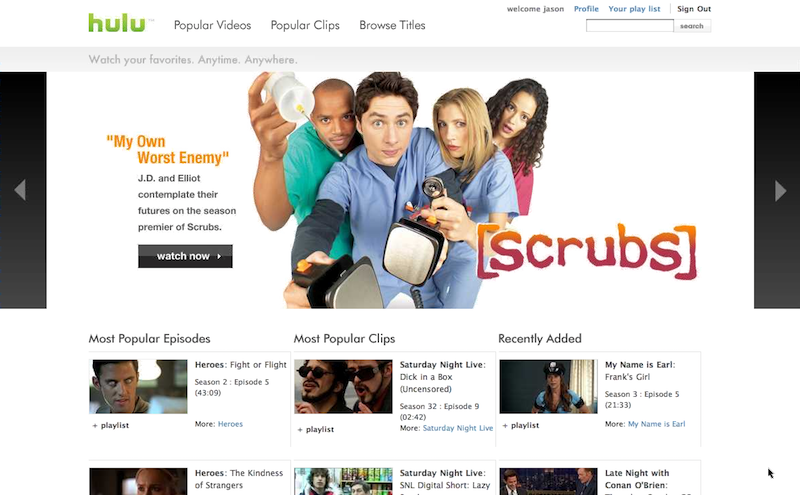 An early iteration of Hulu

Initially, Hulu was divided into free and paid subscriptions. The free plan was service limited in the amount of content accessible by users and accessible via a computer only, and a paid service with a larger library of content and accessed via Hulu applications on computers, mobile devices, and connected televisions. Hulu Plus launched in November 2010 offering an expanded content library including full seasons, day-after access to current season content, and more episodes of shows available through the free Hulu.

In 2016, Hulu rebranded its free content in a joint venture with Yahoo called Yahoo View. In May 2017, Hulu launched a live television streaming service.

Today, Hulu has more than 20 million subscribers. The company added 3 million new subscribers from January to May 2018.