The ambitious, bold and hungry start their week with The Business of Business!
Innovation
5.6.20   4:43 PM Innovation

There's an 87% chance your next financial planner will be male

The financial advisor industry has always been an old boys' club, but this new data discovered via code at Northwestern Mutual suggests that things aren't changing any time soon.

This report was written by Joshua Fruhlinger and Jon Marino, with research by Stella Weng.

Northwestern Mutual Investment Services is taking a bespoke approach when it comes to matching prospective customers with financial advisors. It invites users on its website find a financial advisor based on criteria including financial goals, age, location, and income. All reasonable things to consider, to be sure, when one is looking for a financial advisor.

This means that Northwestern Mutual has its entire directory of advisors. This also means that it has all of their locations and specialties. And, as we discovered, it means that, contained within the site code, is additional information about the advisors, including their gender (as determined by NoMu, not us). So we ran the numbers on the 7,500 advisors listed online, and as it turns out, the mutual company employs 87% male financial advisors, and, in some states, 100% of its advisors are male.

Hidden in Northwestern Mutual's site code is additional information about the advisors including their gender (as determined by the company, and posted online).

The code looks something like this - we've highlighted where our data was able to track the firm's listing of staffers based on gender: 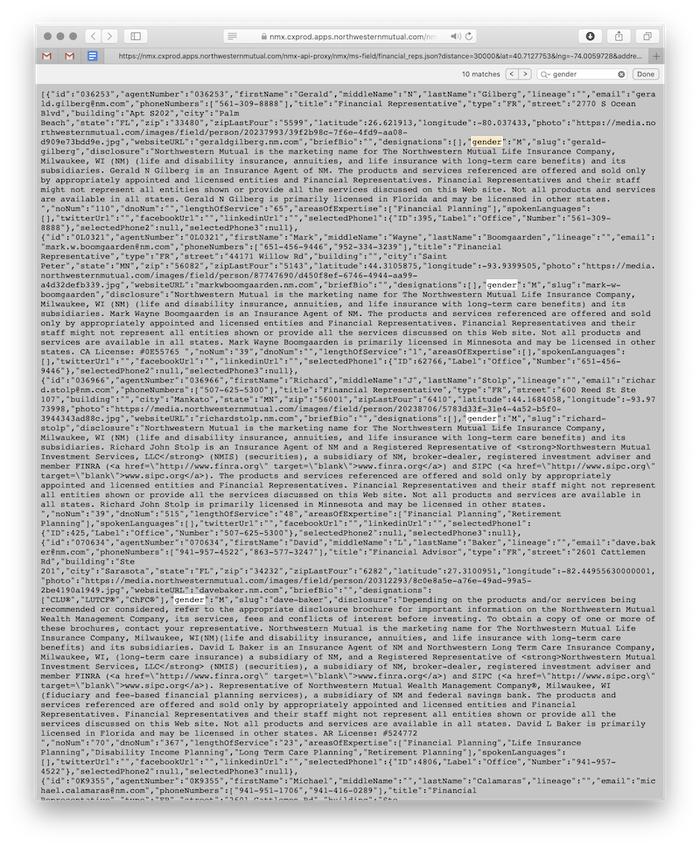 It also includes the advisor's years of service along with the typical disclosures. But the "gender":"M" (or "F") is what really caught our eye. It turns out that of its 7,576 financial advisors in its online directory, 6,599 are listed as male. Just 977 (or 13%) are noted as female.

Subscribers can see the raw data pulled from the source here.

On a state-by-state level, Northwestern Mutual has more male than female advisors in every state. Maine is the company's most gender-diverse state. Among its 6 advisors, 2 are female. But in more populous states like New York and California, men dominate listings by as much as 86%. In New York, for instance, of the 574 advisors at Northwestern, just 79 are listed as female. Some states, like Wyoming, list 0 female advisors.

To be fair to Northwestern Mutual, the financial advisor career path has been dominated for men by generations. As Steve Garmhausen reported for Barrons in 2019, women financial advisors represent 15-20% of all advisors.

"We haven't done a good job of helping women, or any kind of diverse candidate, understand the opportunity," Brittain Prigge, president of Balentine, told Barrons. "In a lot of ways, this is still an old boys' club."

Morgan Stanley, meanwhile, is "actively recruiting and preparing more female advisers for the needs of the marketplace," Kara Underwood, head of wealth management diversity and inclusion at Morgan Stanley told The Wall Street Journal in August.

We ran 9,600 "advisor" jobs through Kat Matfield's "Gender Decoder for Job Ads" which looks for words that are "subtly coded as masculine and feminine" according to research published in the Journal of Personality and Social Psychology. As it turns out, Morgan Stanley was indeed using less male bias in its job listings leading up to August 2019, when that statement was given. But, since then, it looks as though it's returned to language that's more gender neutral. In July, for instance, Morgan Stanley jobs had a low average male bias of just 36.1%. Since then, though, it's averaged higher.

With the anticipated addition of wealth management industry powerhouse E*Trade, via its multi-billion dollar deal earlier this year, Morgan Stanley has an opportunity to not just integrate a digital superpower into its suite of services for ultra-wealthy clients - it also has an opportunity to help highlight improving diversity. The gender bias statistics for E*Trade hover just around 50/50 (and were consistently even), signaling very little gendered language in its job postings (data not shown).

Wall Street works at a competitive disadvantage to other sectors, like technology, which have been more successful in recruiting and retaining women, in part thanks to the fact that rising board gender diversity has gone hand-in-hand with improving workplace policies for families. But, the financial services sector's reputation for being an extension of an Ivy League frat house certainly isn't helping it recruit - nor are statistics like the ones we cite.

At a time when more families' finances are being managed by women, there is also a growing trend pushing women into the field that has been predominantly been overrun by men for generations on Wall Street. But - amid a global pandemic - it remains to be seen how many roles will be open for rising stars, regardless of gender. Between top banks' growing push to digitize services, and the lingering pall that has been cast over hiring for top financial services firms globally thanks to the pandemic, it's unclear how much advancement towards gender parity can be achieved while Wall Street tries to battle back a recession.

But if more of their clients start voting with their feet, Wall Street firms may just apply the pressure to themselves to diversify.