VR is back! How Sony sold 4.2 million PSVRs - why and what it sold most

Despite VR helmet sales waning across the board, Sony's bundling and software releases have kept the platform humming. Here's why.

The consumer VR market has been a roller coaster of sales at best, and a slow decline into buyer apathy at worst. Last year we reported that sales for VR products were down in most categories, including those of PlayStation VR, HTC VIVE, Samsung Gear VR, and Oculus Go. Meanwhile, the 2018 holiday season was surprisingly good for some new stand-alone products like the Oculus Go.

But above all VR headset makers, Sony has been clever with marketing and packaging its PlayStation VR system, releasing bundles with new software regularly in order to stoke interest and refresh retail point-of-purchase displays.

Road to VR got its hands on unit sales data from Sony in order to track unit sales since PlayStation VR's launch in 2017, and based on shipments alone, it indeed appears that Sony's bundling and high-quality content release schedule has helped maintain healthy sales. 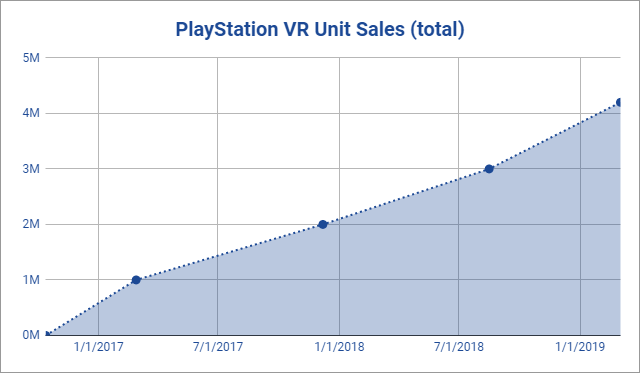 Data from Sony; Chart by Road to VR

But what software and hardware helped move 4.2-million VR units for Sony? We look a look at sales-rank data for Sony's PlayStation VR product catalog at Amazon in order to get a glimpse of just that. By calculating average sales-rank for individual skus and then factoring in the number of days these products remained top sellers, we have a sense of just that.

Sony's original PlayStation VR unit — just the headset — tracked the most, having ranked for 29 days with an average sales rank of 29.03. Ranked for 23 days is software-title Robinson: The Journey. It's important to note that these were both launch products. In other words, they were part of the initial sales rush and consumer interest in the new PSVR product line.

The PlayStation VR Skyrim Bundle — a package that includes both a headset and role-playing game Skyrim — also sold well for Sony, with an average sales rank of 55.5 over 22 days.

Taken as a whole, the top-20 selling PlayStation VR products (according to Amazon sales-rank data) makes it pretty clear that Sony's strategy of repackaging, bundling, and releasing content on a regular schedule appears to be keeping consumer interest at a steady hum.

Indeed, Sony's celebratory announcement of having sold 4.2-million VR units is more a list of games and software coming to the PlayStation VR platform over the next few months.