Linkedin is a hub of professional networking and news. But would it be worth more if broken apart?

VCs predict that Linkedin's laundry list of features make it ripe for unbundling. Harry Stebbings of Twenty Minute VC tweeted earlier this week his thoughts on the platform and its multiple use cases, explaining how he thinks Linkedin could break itself apart (or be picked at by potential competitors) into multiple, highly verticalized services which on their own would be worth much more than Linkedin is as a whole.

The tweet, which racked up 1,300 likes, generated discussion as to how these hypothetical companies would operate, but was potentially revealing that VCs may be eyeing companies that have potential to bite off chunks of Linkedin’s market.

Jeff Fluhr of Craft Ventures, also the creator of StubHub, predicted something similar in May of last year in a Medium article titled “LinkedIn is the next Craigslist.”

“That same unbundling that happened to Craigslist is now about to happen to LinkedIn,” Fluhr wrote. “While LinkedIn will remain a valuable property… it will give way to a number of vertical specialists who go deeper solving problems for a particular job category.”

Similarly to Stebbings, Fluhr predicted that these companies will thrive off a specificity that Linkedin lacks. “These new specialists may look quite different than LinkedIn — just as Airbnb and Tinder looked quite different than Craigslist — but the common denominator will be the hyper-verticalization of labor/service marketplaces,” Fluhr wrote.

Below, we've provided a graph of almost all of Linkedin's major services or features and how they interact with one another. 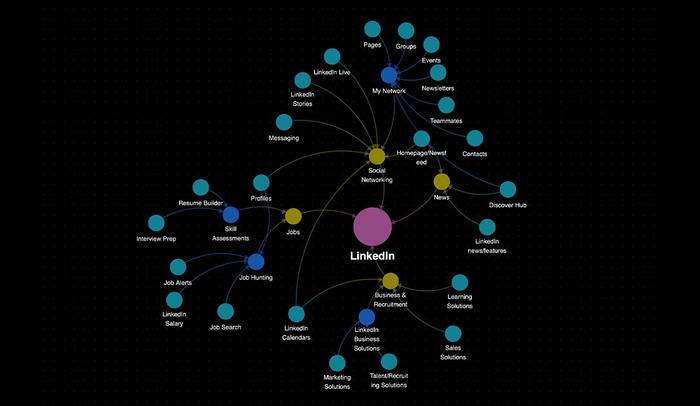 Each of Linkedin's major services can be divided into four major categories: Business & Recruitment, Jobs, News, and Social Networking, some of which can be classified under more than one category. Light blue and blue nodes represent Linkedin's various services and categories they may be bundled under, and each yellow node represents a broader category we have organized these features under.

Each feature listed on this graph represents an opportunity for Linkedin to specialize in this specific type of service, and within each node there are further opportunities for verticalization; Linkedin's job hunting features, for example, could be verticalized to allow prospective employees and recruiters find and network with professionals within a specific industry. Imagine a sub-section of that service, or a separate service entirely, that is specific to medical industries or blue collar workers - two markets which Fluhr points out has yet to be fully taken advantage of by any social media or professional networking site.

Stebbings and others highlight is that Linkedin does too much, and none of it as well as it could.

One user asked, “Linkedin is about the network and people. So how do you get the people or the network on a completely new platform that already does something similar to the platform they already use? Why would they switch?”

“So I agree and disagree,” Stebbings replied. “The challenge with Linkedin now is discovery and UGC is largely broken. Due to the lack of connectivity between the network, the content matching is so broken, the creation is highly clunky and generalized.”

Many of Linkedin’s disparate features have no natural interaction with one another, so it may be better for Linkedin or its competitors to separate them entirely and go all-in on delivering a specialized service. A person using Linkedin purely to browse job listings, for example, has no use for Linkedin News, but would get more value out of a service that provides better tools for finding a job.

Founder and former Uber employee Scott Gorlick agreed with Stebbings' assessment, writing “[There are] so many opportunities in industry-specific vertical networks: - anything that makes it easier for companies to find, pay and recruit workers. - for professionals to get hired. - Vetting/references... anything else Linkedin is dropping on the floor.”

Even once broken apart, there is space for expansion within any of the stray pieces. A site that focuses specifically on professional networking could be broken up by industry. A business-focused social media and networking site could focus on a highly-personalized algorithm that has helped lead companies like Twitter and TikTok towards success.

Defenders of Linkedin chimed in almost immediately after the initial tweet, claiming it would be harder to compete with the site than most think.

“I have worked at LinkedIn for 10+ years now and think this you are underestimating just how hard this would be,” wrote Stephen Gundee, whose Twitter bio says he is a Global Client Executive at Linkedin.

Others chimed in similarly. Josh Elman, who has served on the board of companies like Medium, Discord, TikTok and Houseparty, said that he thinks it will be the hardest network to disrupt because its value is not in its active uses - posting, networking, and so on - but in its passive uses.

“Most people aren’t active except when necessary - but available in search terms. That is the value. Hard to displace,” Elman wrote.

Another user, designer Max Wendkos, said that LinkedIn had a “strong moat” because the cost of switching platforms is very high for users. Like Elman’s reply, Wendkos is speaking to the benefit of existing passively on LinkedIn and not having to move your entire profile and professional image elsewhere.

In response to all these counterpoints, Stebbings clarified his original tweet, stepping back from the original claim.

“Haha, actually, I kind of misphrased this Tweet,” Stebbings wrote. “I see these networks as additional to Linkedin. Linkedin will be the core system of record that is not changed so often.”

Another way of saying this is that Linkedin is not just waiting to be pulled apart by competitors, but is actually missing out on a significant opportunity by not breaking itself apart into specialized pieces. Linkedin itself could still remain the professional hub and brand that all these services are tied to, but each feature would benefit from a deep dive.

In another reply, Stebbing wrote that he thinks these services will take shape as “adjacent/additional verticalized networks that provide highly tailored content, connection and community.”

The remaining question is whether or not Linkedin will open its eyes to the opportunity in front of them before a competitor swings in and siezes it.