With a focus on machine learning experts, Twitter is hiring aggressively to create tools designed to moderate discussion on the social network.

Twitter ($TWTR) is betting on machine learning and a new "Media Understanding" team to moderate discussion on messaging platform. This new effort comes after Twitter has come under heavy scrutiny from virtually every direction, most notably from the media and President Trump, who just today called the social network's current content moderation efforts "discriminatory and illegal".

Here's what we know:

The graph below shows the number of job openings at Twitter with the phrase "Machine Learning" in their titles:

That first position, for Product Manager, is described as such:

We’re using machine learning to better classify and filter the huge volume of media content that is shared on Twitter and are looking for a senior product manager to lead the vision, product strategy, and execution of this ‘Media Understanding’ initiative.

Working with an expert team of machine learning researchers and experienced services engineers, you will be responsible for building and executing on a roadmap of applied machine learning services that will allow us to filter and classify all of the media shared on Twitter.

As a champion for data-driven thinking and attention to detail, you will work to both improve the health of the public conversation through barring banned and sensitive media content from our platform and also help us recommend the best media content to our customers based on a deep understanding of what it’s about. 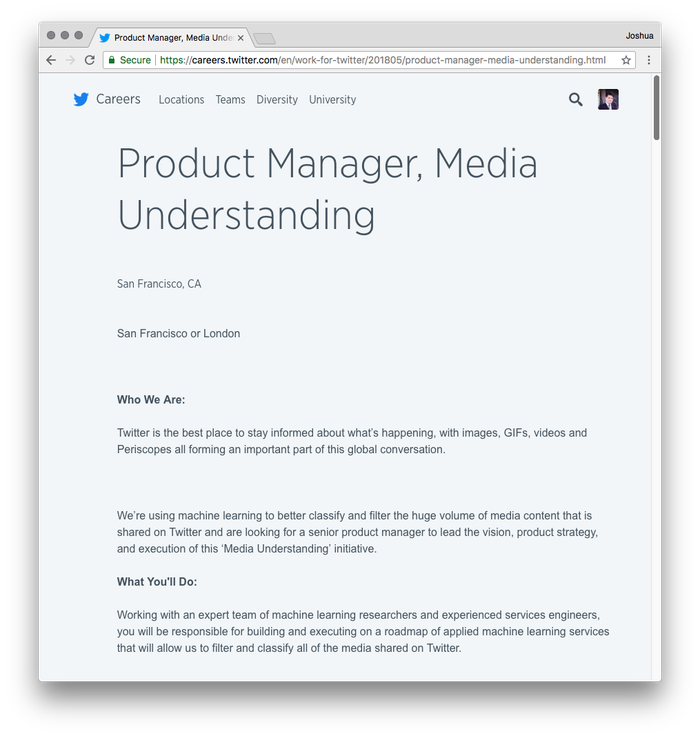 The job description goes on to discuss efforts to improve the "health of the public conversation through barring banned and sensitive media content" from the platform.

The four currently open positions with "Media Understanding" are listed in the table below:

The Trump administration has put Twitter front-and-center when it comes to the dissemination, distillation, and deconstruction of media and information. Donald Trump uses Twitter to broadcast to his base while media companies use the platform to distribute content.

It's been a learning experience for Twitter, which was originally launched as a simple way for people to shout out their thoughts via text. But now it's a political and media platform on which many people rely not just for information but for accuracy.

To wit, and as mentioned: even Donald Trump himself is asking for an investigation into how Twitter monitors, amplifies, and mutes content.

As Facebook learned last year, employing humans to do this is dangerous, as it allows bias into decision making. Twitter's "Media Understanding Initiative", it seems, looks to couple human decision making with machine learning to get ahead of problematic content.

The larger strategic picture here, however, is Twitter's desire to tap into machine learning in order to automate the process of identifying troublesome content. After all, a "Product Manager, Media Understanding" is going to need a team of engineers to develop tools that can put any findings into practice.

That's where hiring for Machine Learning comes into play, and why Twitter is searching aggressively for people with such talents.