The ambitious, bold and hungry start their week with The Business of Business!
Markets
5.14.18   1:40 PM Markets

How discounters TJ Maxx and Ross are thriving despite expectations

Even in a good economy, consumers continue to flock to discounters like Ross, Marshalls, and TJ Maxx. But analysts are bearish on the discounters. What's next?

Most indicators point to the fact that the economy is booming. Unemployment is low. And yet more and more people continue to turn away from department stores and designer boutiques and head to discount chains for their clothing, shoes, and accessories. Whether it is Ross , Marshall’s, or TJ Maxx, one thing is certain—people like to get their clothing at deep discounts. But Wall Street analysts’ outlook for those big discount chains isn’t that rosy.

For almost all of 2017, investors bet big on discount department chains like Ross ($ROST) and TJ Maxx ($TJX) (who also own Marshalls in the space). The prevailing thought was that even the mighty Amazon couldn’t cut into their booming businesses because customers of these stores enjoy the “treasure hunt” experience, which is difficult to duplicate online.

Where the analysts got it wrong

Recent analyses, however, predicted that sales in this retail sector were due to slow down. A Wells Fargo analyst predicted lower sales in fiscal 2018 for TJX (parent company of TJ Maxx and Marshalls) and ROST (parent company of Ross and Burlington). In January, that Wells Fargo downgraded TJX shares’ price target to $72 from $76. ROST’s stock price was left unchanged.

It turns out that the reason analysts are cooling on these brands is because of overhead costs related to the huge stores, plethora of locations, and vast amounts of inventory. It is generally believed that as the economy improves, shoppers would trade up to new stores. Even in the off-price sector, shoppers who previously flocked to Ross may now be shopping Nordstrom Rack or Saks’ Fifth Avenue’s Off Fifth stores.

Although analysts were bearish on the deep-discounters at the beginning of 2018, their doom and gloom scenario hasn’t come to pass. As of this writing, TJX is trading at $84.07 and ROST is at $81.94, which is up significantly for both brands from the same time period a year ago. Ross particularly has proven its ability to succeed in a market even when many other retailers and direct competitors are fighting to survive. Ross has seen a 9% compound revenue growth every year for the past decade. The retail giant’s after-tax profit has increased by 16% annually. Over the past two decades, Ross has grown its after tax profit by 12% compounded annually.

So why is Wall Street so bearish on Ross and its competitors? It comes down to basic short sightedness. Wall Street has assumed that Ross, TJ Maxx, and Marshalls would suffer the same fate as department stores. Traditional department stores have been shutting their doors for many reasons including a changing consumer profile and the e-commerce threat. Analysts and investors have been working under the assumption that brick and mortar retail is on its death bed. Meanwhile, these closures are generally a good thing for TJ Maxx and its compatriots. No matter how good the economy gets, people still appreciate a good value and these discount department stores offer that in bulk. 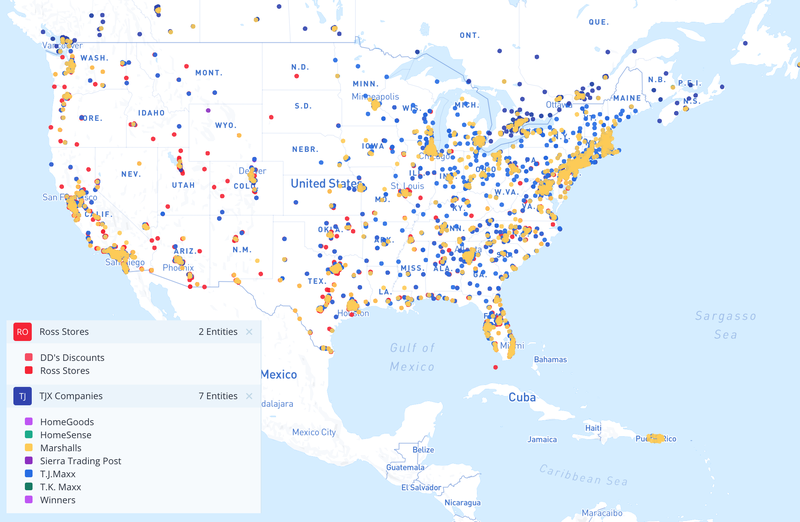 Off-price retail has remained strong in the face of these challenges. To buy into Wall Street’s bearish attitude on discount stores is to assume that the same challenges that have affected Macy’s and Bloomingdales will suddenly also affect TJ Maxx, etc. That is simply not rational. The appeal of these off-price discount stores is that they buy name brand apparel in bulk and price it 20%-60% below department store prices. This business model protects Ross, Marshall’s, and TJ Maxx from the e-commerce threat. Customers are motivated to go to the physical stores to hunt for their “treasure.”

That is something that — as of yet — simply cannot be duplicated online. Part of the joy of the shopping process lies in discovery, and data shows that consumers still like to leave their homes and hunt for deals.