How UberEATS and GrubHub compare — and why a merger makes sense

If UberEATS acquires GrubHub, it'll create the largest worldwide food delivery network. Here's what it would look like and why the two companies are complementary.

Multiple sources are reporting Uber ($UBER) made a bid to buy delivery giant GrubHub ($GRUB), sending GrubHub shares soaring after a trading pause. And while acquisition talks have not been confirmed by either party, journalists and analysts are scrambling to understand both why Uber wants to add GrubHub to its delivery network, and why Uber may be doubling down on the delivery business.

The most common thing journalists are pointing to is the fact that UberEATS has kept Uber afloat (and kept its drivers still working) during massive slowdowns due to the Coronavirus pandemic - a key difference between it, and competitor Lyft. But the map of London below explains why this acquisition may make a lot of sense for both companies.

This explosion of UberEATS delivery restaurants in London shows just how deep Uber's food delivery network runs in major European cities. In London alone, UberEATS delivers from nearly 6,000 restaurants. GrubHub, on the other hand, doesn't operate outside of the United States.

That said, GrubHub's delivery network runs deep in the United States — over 300,000 restaurants in more than 4,000 cities. Its network includes Seamless, LevelUp, AllMenus, and MenuPages.

The UberEATS network is smaller, but, as explained above, international. It operates in more than 500 cities around the world.

In other words, the GrubHub and UberEATS networks are highly complementary. They bring together a massive international network with one that has the United States well figured out.

It's in major cities like New York that the two may have digital synergies, but that will likely be solved by combining the operations into brands that are already well-known in those cities. In the case of both New York and California, that is likely to be GrubHub and Seamless.

It's the GrubHub and Seamless networks that have been digging deep into major American cities like New York and Los Angeles, as can be seen in the restaurant count top-10 by city below.

In New York City alone, for instance, if one counts both Brooklyn and New York, GrubHub and Seamless already deliver for around 15,000 restaurants.

In other words, the two delivery services are a lot more complementary than they may seem at first. While diners in major cities may already choose between the two, the merger will create a massive international delivery network that's not likely to be rivaled.

That said, the international delivery market is a vast, complex thing, as we described last year in our "Delivery Wars" special feature. 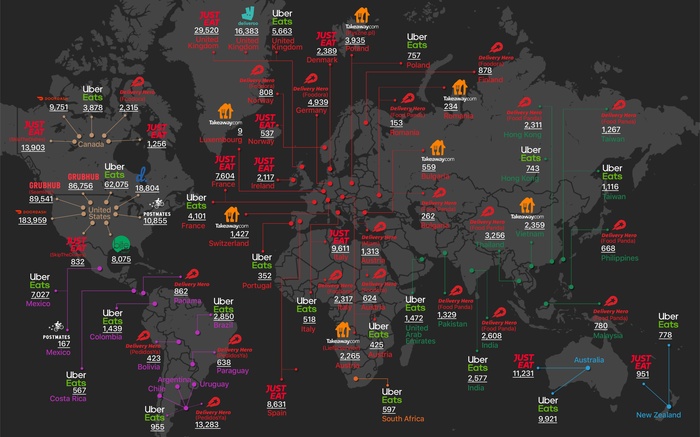 Even with an Uber-GrubHub-Seamless network, Doordash offers delivery from nearly 200,000 locations and Just Eat is nearing 100,000. Finally, it would be foolish to count out Amazon which, while it shuttered its restaurant delivery service in the US, still has a vested interest in Deliveroo, which, at last count, was working with nearly 20,000 restaurants in the UK, Hong Kong, and Australia.

Finally, when it comes to operational costs — which are heavy, especially when it comes to customer acquisition — Uber will be buying into an established network of customers along with a company that has been running surprisingly lean. When comparing workforce sizes, as measured by LinkedIn profiles that include the two companies as employers, it's clear that GrubHub doesn't carry as large of a payroll burn as one may think, especially when compared to that of Uber.