The ambitious, bold and hungry start their week with The Business of Business!
Features
6.24.21   4:42 PM Features

The brand is pivoting from its stale marketing, but data indicates people are skeptical the retailer can offer something fresh.

Last week, Victoria’s Secret announced that it's phasing out its “angels,” the longstanding nickname for models who have contracts with the company. The brand has deemed the rotating, elite clique of celebrity models, from Heidi Klum to Karlie Kloss — who used to star in the annual Victoria’s Secret fashion show and have been the cornerstone of its image since the 1990’s — “no longer culturally relevant,” in the words of CEO Martin Waters. (The fashion show was scrapped in 2018 after years of falling ratings.)

Five years ago, this news would have been a bombshell. But after years of scandals, allegations of misconduct, and generally, the waning appeal of its stuffy, boardroom-invented fantasy of  sexuality, Victoria’s Secret’s mea culpa rebrand was only a matter of time. 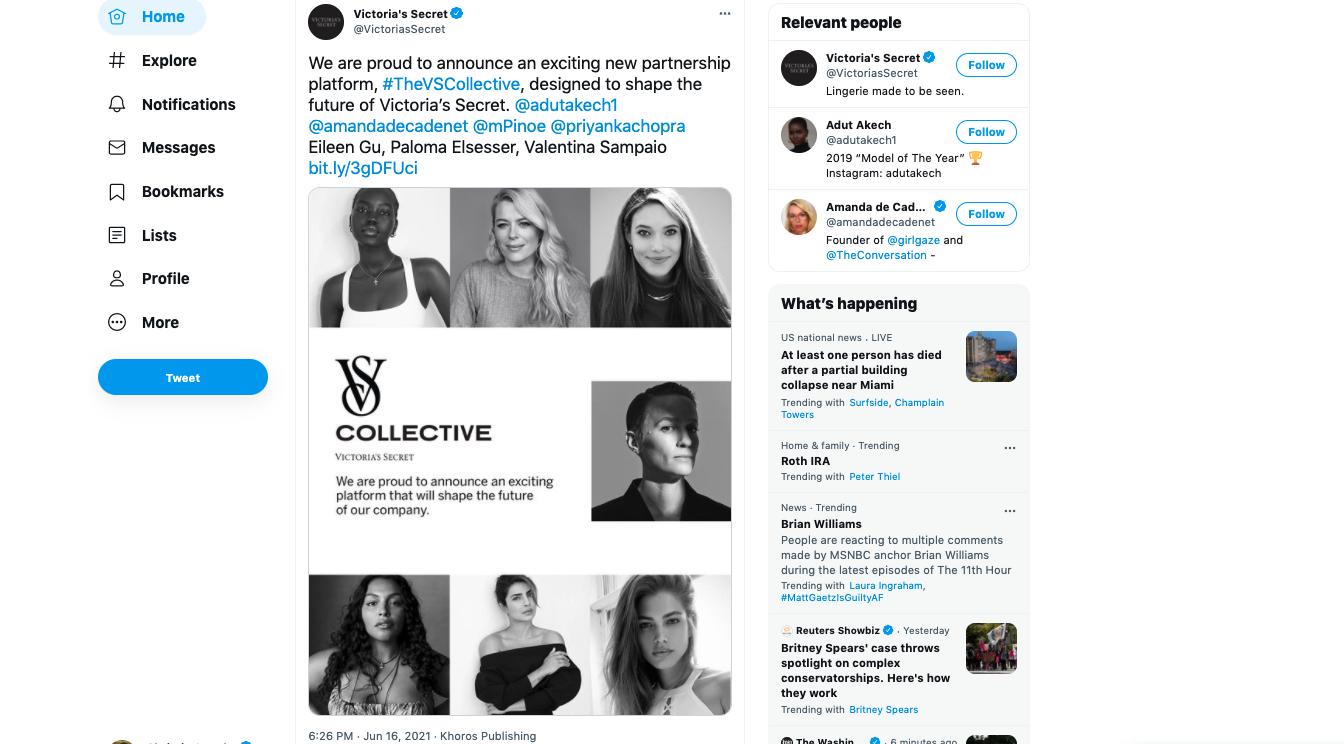 If they didn’t already simply find the brand tacky, many customers have lost interest in Victoria’s Secret at some point during its recent nonstop string of scandals. In 2018, ex-chief marketing officer Ed Razek told Vogue that he didn’t think Victoria’s Secret needed trans models or more plus-size models (“Why not? Because the show is a fantasy. It’s a 42-minute entertainment special”). Then, in 2019, it came out just how close former brand mogul Les Wexner’s ties to Jeffrey Epstein were. Later that year, over 100 models signed onto a letter to Victoria’s Secret’s ex-CEO John Mehas, demanding the company take action on “sexual assault, alleged rape, and sex trafficking of models and aspiring models.” Most recently, in 2020, the New York Times did a deep dive into the company’s “entrenched culture of misogyny, bullying and harassment.” As a result, Victoria’s Secret has nearly one million fewer followers on Twitter than they did two years ago, in June of 2020.

Customers have been more loyal on Facebook. But while the brand’s following on the platform hasn’t shrunk, growth has slowed nearly to a halt. Back in 2018, Facebook was gaining followers at a steady, 4% year-over-year rate, today its follower count is only up 0.8% from last year.

It’s predictable that Victoria’s Secret’s following has shrunk or gone flat over the past few years. As its social capital has dropped, so has its actual capital. After a 2020 deal to be bought by Sycamore Partners fell through, parent company L Brands has since decided to spin off Victoria’s Secret into an independent, publicly traded company, rather than sell it, finding bids to be too low. Prior to the rebrand, Victoria’s Secret had been focusing on profitability and cleaned up their C-suite, purging Mehas, Wexler and Razek. Martha Pease, the new chief marketing officer, was behind the VS Collective, and the brand’s board of directors is now majority female. This new leadership is now focusing on the company’s image. But it’s far from obvious that Victoria’s Secret can become successful by inverting its old image of pin-up femininity and glamorous excess.

This seems to be what the company is doing with the VS Collective. So far, the messaging (generic even for marketing speak) and imagery (black and white headshots) around the rebrand are minimal and safe, the opposite of the angels-era marketing. So far, the campaign has given people little to talk about. Since the June 16 announcement, the brand’s Facebook “talking about” count has actually dropped: 80,000 people were talking about the brand on June 12. A week later, the count was 63,000.

All the touchstones of Victoria’s Secret’s new rebrand — diversity, female empowerment, partnerships with well-liked celebrities — have become the status quo in women’s apparel. What does Victoria’s Secret have to offer in the way of representation brands from Aerie to body positive DTC brand ThirdLove to Rihanna’s Fenty Savage have made body and racial diversity their entire identity? These brands have made Victoria's Secret sweat for years, especially Fenty Savage, which in 2019, put on a competing fashion show, proving you can have a dazzling, “fantasy”-worthy TV spectacle with diverse models. Indeed, Aerie, Calvin Klein, ThirdLove as well as DTC brand True & Co have all been growing their Facebook followings at faster rates. The VS Collective looks a lot like what these brands were doing five years ago.

It says something about what truly bothers the Victoria’s Secret customer that the most dramatic recent drop in Facebook followers didn’t follow the Epstein news, or Razek’s comments. Rather, it came in November of 2019, after Victoria’s Secret cancelled its annual fashion show, which had run since 2001. Once notorious for multi-million dollar bejeweled “fantasy bras,” celebrity guests, and over-the-top outfits, the show has seen viewership drop from 10 million in 2010 to just over 3 million in 2018. The week after, the brand lost 400,000 followers that it hasn't since regained. This data contradicts the idea that Victoria’s Secret has become unpopular because of its hyper-sexualized image and executives’ scandals. Rather, people just aren’t sure what the brand has to offer them when you strip away the wings, rhinestones and spectacle.

While people had little to say on Facebook, many had strong opinions about the VS Collective on Instagram. “No thanks” and “Goodbye Victoria’s Secret” reads comments on the announcement post with over 2,000 likes, characteristic of dozens of comments. Another critic explained their view: “There needed to be balance and  innovation ridding the brand of a toxic dangerous culture, while at the same time not losing its essence,” wrote another. “VS used to lead the market and now its trying to keep up and save face.”

Victoria’s Secret’s new leaders believe their customers want them to become more politically correct. Hiring diverse spokespeople is far from a bold or interesting statement. Meanwhile, data shows that abandoning signature glamour is just as alienating to customers as scandals, if not more so. The tepid response to the VS Collective suggests that people don’t care for a watered-down, wannabe-”woke” version of a brand once famous for putting on a show.