Making your restaurant's patrons happy is hard. Making your delivery customers happy is even harder. So it goes for the worst-reviewed restaurants in the world when it comes to Uber Eats delivery.

If you're in the restaurant business these days, you need to deliver or die. It's just a matter of restaurant survival as consumers expect to be able to order from virtually any kitchen and have warm food delivered within an hour. As rival delivery services compete for diners' money, restaurants scramble to meet demands. Some are successful.

Others are not, as Uber Eats review data across 338,161 restaurant reviews around the world reveals. Uber Eats ($UBER) users rate restaurants (and the delivery experience, to be fair to the restaurants) on a 5-star scale. The following 15 restaurants on the world scored the worst.

To be fair to restaurants that may be new to the Uber Eats process, we only included those that have been reviewed at least 100 times.

Here's the list, including the restaurant name, location, number of reviews, and review rating on a 5-star scale starting from worst-reviewed on average.

But first, the worst three. 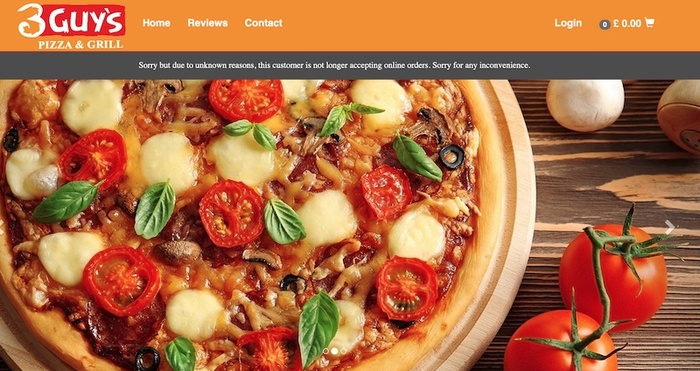 There are numerous "3 Guys Pizzas" throughout the UK, perhaps like Marios or Famous Rays here in the states. This particular offending location, on High St. W, Wallsend scored a woeful 2.2 out of 5 stars across 165 reviews.

It is unclear why this late-night pizza joint scores so poorly, but 3 Guys' website includes this ominous note: "Sorry but due to unknown reasons, this customer is no longer accepting online orders. Sorry for any inconvenience."

It's possible the restaurant gave up delivery after a tough go at it. It appears the restaurant is also a late-night kebab spot called "Kebab Hut" (or that's what it became), and its Facebook reviews are even worse, with 1.4 out of 5 stars.

This North Indian restaurant that appears to be run out of the 5th floor of a busy hotel in Koregaon Park, Pune, India, scored a meager 2.3 out of 5 across a formidable 237 reviews. It's possible that Achaar Vichar is simply spread too thin: it's available on a number of delivery platforms, including not just Uber Eats, but also Swiggy and Zomato (on which it also scores poorly).

Achaar Vichar appears to do heavy volume, as it's not just in a busy area but also looks to be run out of a busy OYO hotel. Given the high volume, competition, and expectations from hungry customers in the area, the low review scores may just be par for the course.

This Chinese restaurant in Madrid, Spain isn't loved by its delivery customers. It scored a muy malo 2.4 out of 5 across 138 reviews on Uber Eats. On TripAdvisor, La Gran Muralla (which translates to "The Great Wall") is ranked as the 9,217th best restaurant out of 10,735 in Madrid.

The 15 worst-reviewed restaurants in the world on Uber Eats