The ambitious, bold and hungry start their week with The Business of Business!
People
3.19.19   5:35 PM People

Despite a sitting president with the same name and regular promotion, the Trump Organization and its Golf Resorts are waning in popularity on Facebook.

There is little doubt that Donald Trump and his businesses love promotion. Few brands are more in your face, from the Trump name emblazoned on skyscrapers and hotels to piggy banks that look like a bar of gold (yes, that exists). And few people and organizations are as interested in ratings and traffic as a measure of performance as Donald Trump, a man who loves to celebrate television ratings when they're good and use them as insults when they're not.

So here are some numbers the Trump Organization may not like.

The Trump Organization($PRIVATE:TRUMP)'s Facebook ($FB) presence is sagging and, among the landscape of similar businesses, smaller than expected. In fact, not a single Trump business has a million followers.

The Trump Organization's main Facebook page under the username of simply "Trump" claims 664,526 likes and 664,700 followers. While that's not bad, it's curiously slowing when it comes to growth. The page saw a nice acceleration of followers in late 2017 after Donald Trump's election, but it's failed to maintain momentum.

Growth year over year has slowed over time, despite promotional efforts and regular posts to the Facebook page. In fact, in just the past week, the page was updated with posts related to St. Patricks Day, Trump Golf as a place to hold weddings, and a promotion for a new red tie available at the Trump Store for $125. 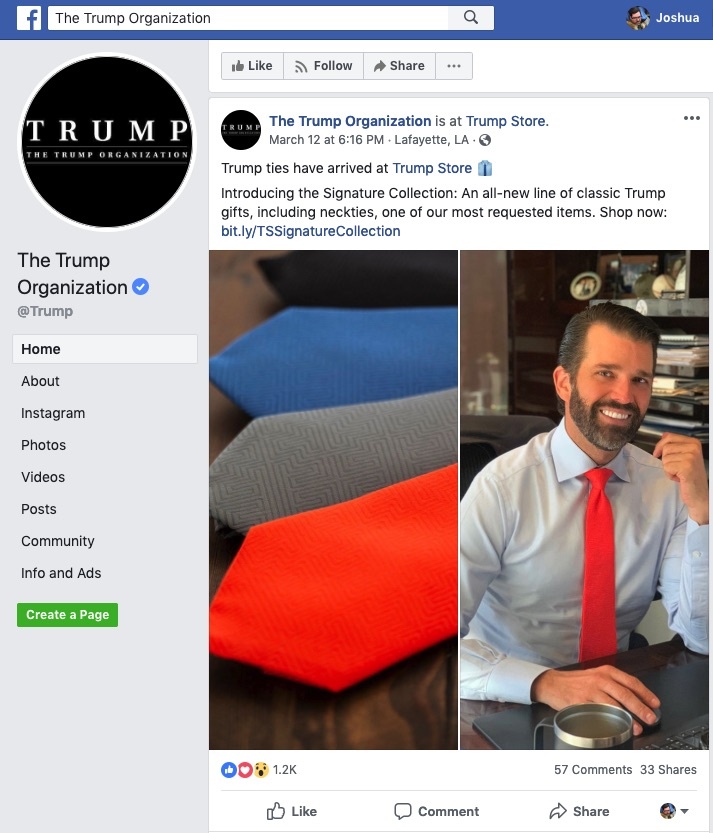 Another major Trump Organization Facebook Page with a decent following of almost 500,000 followers is Trump Golf. Like The Trump Organization, it saw rapid growth in post-election 2017, but has failed to maintain that tick as of late.

In the past year, growth by year has slowed to nearly 0%. Like the Trump Organization, the Trump Golf page is updated regularly — four updates in the past week with promotions for young golfers, another St. Patrick's Day post, and one from the past 24 hours about the upcoming golf season — so that doesn't quite explain the waning interest.

A slump in Facebook page interest like this is especially curious as it all comes despite regular content updates to the various Facebook pages and while Donald Trump sits in the White House. It also comes as the Trump campaign just spent a reported $3.5 million on Facebook targeting ads. While that's not directly related to the businesses and Facebook accounts in question here, it does indicate Trump's continued focus on the platform as a promotional vehicle.

One explanation could be that it's generally considered a conflict of interest for a sitting president to promote his or her business. In the case of Donald Trump, he made a very public display of distancing himself from direct business dealings when he was elected. However, he still regularly appears at his golf resorts and his children continue to push and promote the businesses.

Another factor may be Facebook's waning popularity in general when it comes to luxury product promotion. Four Seasons Hotels and Resorts, despite having more followers than Trump Golf, has seen a somewhat similar plateau in interest.

Whatever the reason, one thing remains clear: The Trump Organization's popularity on Facebook is slowing. But there's still time to grab that $125 red tie.