The ambitious, bold and hungry start their week with The Business of Business!
Outcasts
3.3.22   8:13 PM Outcasts

The Big Short Seller Probe: Who are the investors on the DOJ’s list?

Dozens of research and investment firms and individuals are reportedly entangled in the probe. Here are six of the top names.

Short sellers don’t typically have a reputation for making lots of friends. Over the past couple of years, many pressed some buttons by attacking reputations of company targets in research reports and on social media. They were also cast as villains by retail investors congregating on Reddit who fueled last year’s “meme stock” short squeeze.

Now dozens of short sellers are embroiled in an expansive U.S. Department of Justice probe over potential trade abuses. As reported by Bloomberg recently, nearly 30 investment and research companies and three dozen individuals associated with them are part of the inquiry. It’s not clear yet who on the list is considered a “target” of the probe and who might just have information relevant to the investigation.

It’s also not clear yet what the specific allegations of wrongdoing might be. According to The Wall Street Journal, the possible conduct may include “spoofing,” a ploy to use fake orders to manipulate prices of stocks, or “scalping,” in which activist traders may recommend others take a position while secretly cashing out. Investigators are reportedly working closely with Columbia Law Professor Joshua Mitts, who has been highly critical of the impact of “pseudonymous” short sellers on the market.

Elon Musk (who has his own issues with securities regulators) welcomed the probe, possibly because it includes two investors that have shorted Tesla stock in the past. Musk is a longtime critic of short selling as a concept and has called it a “scam.” In a 2018 Tweet, he dubbed the SEC the “Shortseller Enrichment Commission” after settling a fraud charge with the agency that had caused a temporary decline in the price of Tesla’s stock.

To be sure, being involved in a probe or even being criminally charged is not proof of guilt. But the group of people ensnared in the investigation is a veritable who’s who of the short-selling world. We decided to take a closer look at some of the most well-known individuals on the list. Here are six of the top names. All either did not reply or declined our request for comment. Representatives for the DOJ also declined to comment.

Andrew Left is a veteran short seller whose name has long been synonymous with the practice. His company, Citron Research, has been uncovering fraud and identifying failing business models within public companies for over 20 years. Left makes frequent appearances on television to criticize companies that his company is shorting. Citron’s website boasts that its coverage led to regulatory action against fifty companies, including multiple stock delistings and even a 23-year prison sentence for an executive.

Now the regulators may be coming after Left himself, as FBI agents reportedly seized computers at his home in 2021, according to Bloomberg News. Left says he doesn’t know why he is part of the investigation but stated that he intends to cooperate with authorities.

Left was one of the many short sellers that suffered heavy losses in last year’s GameStop short squeeze in the beginning of last year. The price of the GameStop’ stock jumped more than 1,625% in under a month after garnering a cult following among retail investors on platforms like Reddit and Twitter. After getting burnt on the bet, Citron research announced that it plans to stop publishing short reports and will focus on covering long-position investments.

Prominent short seller Carson Block was also subpoenaed by the DOJ and reportedly received an FBI search warrant that extended to his phones. Block’s research company, Muddy Waters is known for making claims about fraud and accounting problems in short-selling targets, particularly at Chinese companies.

A number of stocks owe their disgraceful demise to an exposé from Muddy Waters. Block and his company first came to prominence when Muddy Waters uncovered massive fraud at the Canadian-listed Chinese forestry company Sino-Forest in 2011. Sino-Forest was promptly investigated by Canadian regulators and filed for bankruptcy shortly after. More recently, Muddy Waters spearheaded the takedown of Chinese coffeehouse chain Luckin Coffee with a report that laid bare inflated sales figures by as much as $310 million. The company’s stock has since been delisted.

Carson Block is well known for his flamboyant style and scathing assessments of companies that he believes to be overvalued, often to the ire of the companies he criticizes. Vehicle electrification company XL fleet accused Muddy Waters of “factual inaccuracies and distortions” in response to a their report calling them “middle of the fairway SPAC garbage”. In their statement, XL Fleet hinted that Muddy Waters had slandered them to gain profit from the short position on the company stock.

In response to controversy, Block points to his impressive track record and insists that his main mission is “protecting investors.”

Melvin Capital began 2021 with heavy losses on their short position in GameStop, which they held since 2014. At one point in January, the fund was bleeding more than $1 billion a day and ended the month with a 53% loss.

Plotkin was among the many short sellers that testified before the Congressional Committee on Financial Services in the aftermath of the GameStop saga. He asserted that his fund’s short position in GameStop hinged on earnest expectations that the company's reliance on a physical retail model will lead to declining profits. He also denied any involvement in the decision of stock trading platforms to pause trading of GameStop shares amid the short squeeze. Plotkin assured lawmakers that he was “humbled” by the experience and promised to take action to protect investors from such situations in the future.

Much like its fellow GameStop short squeeze victim Citron Research, Melvin Capital has pivoted away from short bets. According to SEC filings, the fund is currently raising money for a new portfolio that will focus exclusively on long bets.

As its name suggests, Anderson’s Hindenburg Research specializes in identifying (and profiting off of) corporate disasters.

Its most notable target was electric vehicle company Nikola, which it claimed to be an “intricate fraud based on dozens of lies”. Hindenburg showed that a video demonstrating the functioning of the company’s electric truck was staged by rolling the truck down a hill.  Nikola's stock subsequently also went downhill, losing nearly 80% of its value. The company agreed to pay $125 million to the SEC to settle a fraud investigation.  The company's founder Trevor Milton has also been criminally charged with securities and wire fraud (and pleaded not guilty).

Anderson is no stranger to having to play defense himself. A few years ago, Hindenburg Research was accused of defamation by Bollywood production company Eros, in response to a report alleging accounting irregularities. Hindenburg followed up with an exposé into egregious falsifications in Eros’ financial reporting, contributing to a sharp decline in its stock price.

Fellow short seller Marc Cohodes alleged that Hindenburg sources information from large funds, serving as a front for their short trades. Andrerson has brushed off those kinds of claims. He told New York Magazine that he attributes the DOJ investigation to the vengefulness of the enemies he made over the course of his long short selling career.

Unlike Citron and Melvin Capital, Spruce Point Capital is a fund that’s part of the DOJ probe that is doubling down on short trading. Spruce Point founder Ben Axler tweeted praise about Left's short trading career on the heels of the announcement that Citron will be shifting focus towards long bets. Axler emphasized the importance of short trading research for the “flawed market system”.

Spruce Point was founded in 2009 and has since contributed to the near total demise of at least five companies that it researched. Among its recent hits is Oatly, the dairy alternative producer that lost nearly 68% of its stock value after Spruce Point pointed to a number of alarming signs for the company’s prospects. Spruce Point reported 21% net growth in 2021, a tough year of multiple short squeezes and 18% growth for the Dow Jones. 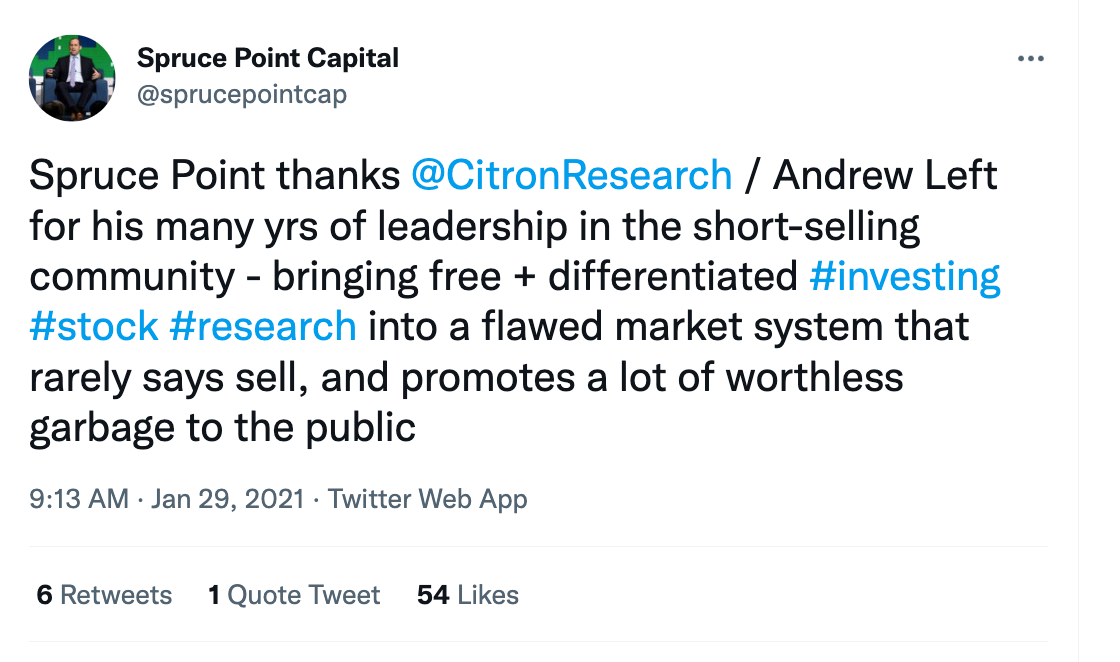 Gotham City Research is another fund that has remained committed to its short-selling strategy despite recent scrutiny. On the heels of the GameStop saga last year, the company said that “there have been worse times to get into”, so-called, “gentlemen short selling."

Gotham City is best known for its takedown of British country club turned insurtech company Quindell. Quindell’s shares crashed and the company filed for bankruptcy after Gotham City published a bombshell report questioning its stated profits. Quindell did end up winning a libel case against Gotham City after the latter neglected to put up a defense in court.