The ambitious, bold and hungry start their week with The Business of Business!
Features
6.17.21   6:37 PM Features

The r/WallStreetBets Glossary: A field guide to apes, stonks, tendies, and more

The shit-posting, meme-loving forum has left its mark on markets, and on the financial lexicon.

Years ago, the most rapacious cutthroats in the stock market were slick, suit-wearing Gordon Gekko types. Now they’re shit-posting, meme-loving millennials and Gen Zers who congregate virtually on Reddit.

Traditional financial firms endured a brutal introduction in early 2021 to the subreddit r/WallStreetBets, a forum full of mostly-amateur traders who describe themselves as “apes” and “degenerates.” Driven as much by a subversive sense of humor and an anti-establishment ethos as by the lure of wealth, the group powered an otherworldly rally in GameStop in January. In the process, hedge funds and institutional investors that had shorted the dying brick-and-mortar video game retailer were “squeezed” out of $11 billion, and some of the “apes” got rich.

Since then, the group has ballooned in popularity — rising from a few million users at the beginning of the year to now well over 10 million. Big financial players are taking note of the stocks it trumpets, like BlackBerry, Nokia, MicroVison, and movie theater chain AMC, which had a dramatic surge in its share price over the past month.

The forum’s (often gleefully offensive) slang has also made its way into market chatter on other social media platforms and on cable news channels. While the subculture might be perceived as self-destructive nihilism to some observers, it has nonetheless caught on. If you’re tempted to view the appeal as just an angry, white male phenomenon, be advised that lots of participants not fitting that description will swiftly and savagely correct you.

In a bid to increase its WallStreetBets fluency, quant fund Cindicator Capital posted a job ad in February targeting applicants who were active on the subreddit, asking specifically for someone with good Reddit karma and “free from any mainstream financial brainwash.” We can do one better. We scoured the Internet and queried some of the forum’s participants to come up with a fairly comprehensive glossary of popular WSB lingo. Here are the results.

Apes: Retail investors bullish on heavily-shorted stocks. References a quote from the 2017 movie “War for the Planet of the Apes,'' when the chimpanzee character Caesar says, “Apes together strong!” The message is that by going long on a stock together, the “apes” on WallStreetBets can overcome the short bets some hedge funds have made.

Autist: Vaguely references the disorder autism, and is used for a person who self-identifies as non-neurotypical. An “autist” might be someone who is high functioning, highly analytical but socially awkward with low emotional intelligence. A person might call themselves an “autist” on the subreddit to be self-deprecating, or might use the term for someone else as a joke, insult, or to be endearing.

Bagholder: People who ended up buying too late or waiting too long to sell, and lost money. People who were left holding the bag on GameStop broke off and formed their own subreddit, r/GMEbagholdersclub, where they mostly post funny memes about their predicament.

BANG: Silicon Valley has its FAANG stocks, the heavy-hitters — Facebook, Apple, Amazon, Netflix, Google. WallStreetBets has BANG stocks  - BlackBerry, AMC, Nokia and GameStop. These are generally stocks that are heavily-shorted, considered underdogs, and appear to be prime targets for “short squeezes.” Clover Health recently became another popular target, perhaps calling for a revising of the acronym to “CLBANG.” 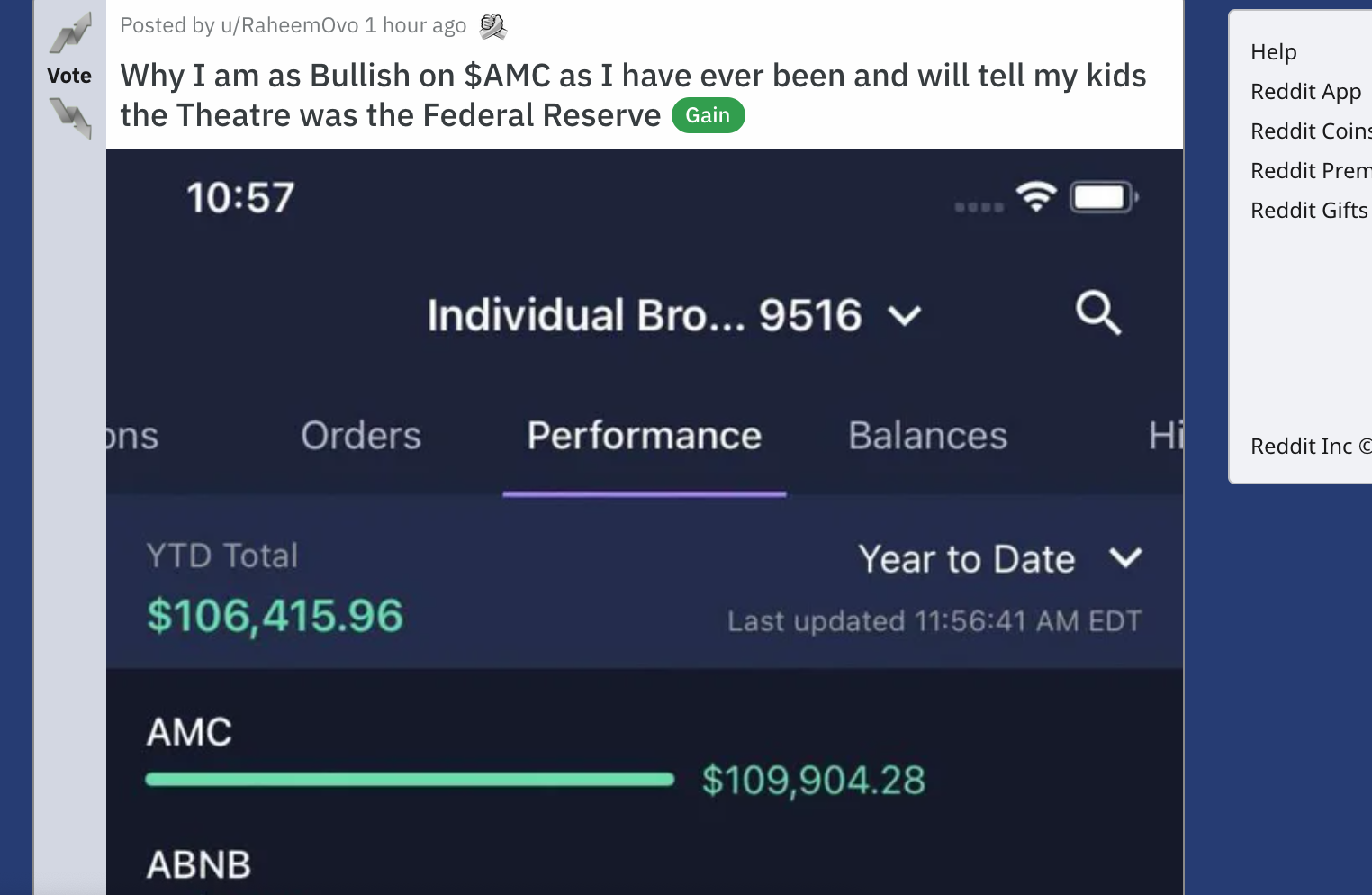 DD: Doing analysis of potential trades. Short for “due diligence.”

Degenerates: Another self-deprecating term that members of the subreddit use to describe themselves. Similarly, and more profanely, they also refer to one another as “r*tards,” which in most contexts would be an unacceptable slur for people with mental disabilities. Follows with the theme of people on the subreddit embracing their role as outcasts.

Diamond hands: Elon Musk raised eyebrows when he tweeted “diamond” and “hands” emojis during a crypto market crash in May. He meant that Tesla would hold on to its bitcoin position, regardless of negative headwinds. WallStreetBets members use the emojis to symbolize a strong commitment to holding a stock, despite risks or near-term losses, to reach an end goal.

GameStonk: A play on GameStop, which also incorporates the WallStreetBets’ intentional and humorous misspelling of “stocks.” Refers to the subreddit and meme-driven 1,550 percent rise in the retailer’s stock early in 2021.

Gay bear: Bulls expect stocks to go up. Bears expect them to go down. WallStreetBets, often deliberately incorporating un-politically-correct terms and symbols, refers to people who WANT stocks to go down, and are seeking to profit off of the position, as “gay bears.” They are denoted by a picture of an LBGT flag and a bear emoji, or sometimes a strange video clip of dancing animated bears.

“I eat crayons:” More subversive self-deprecation, often used by members of the group to imply that their foolhardy bets, and possible resulting losses, should not be mistaken for formal investment expertise.

“I like the stock:” Also meant to imply that nothing in the memes and posts on the subreddit should be construed as “official” advice. The phrase became a rallying cry, deflecting scrutiny into possible market manipulation, when financial analyst and subreddit participant Keith Patrick Gill used it when testifying before Congress. The 34-year-old, known online as “Roaring Kitty,” became a Pied Piper for the GameStop rally on the forum. Also is an ironic reference to an expression Jim Cramer uses on his CNBC show.

Meme stocks: Generically refers to stocks that see dramatic price increases driven primarily by jokes and memes shared on Internet platforms, such as Reddit, Twitter and TikTok. Securities regulators have concerns that market fundamentals may not support the Internet-fueled popularity of these stocks.

“My wife’s boyfriend:” A popular joke on the subreddit. Like a lot of the humor on the site, it’s self-deprecating and refers to expectations around hetero-normative masculinity, including dominance and competence. One interpretation is when users say “I have to borrow money from my wife’s boyfriend” to buy more stock. Male users on the forum may turn to that style of humor as emotional self-protection, one sociologist suggested.

Paper hands: The opposite of diamond hands, and is generally derogatory. Refers to someone who sells the stock under pressure, or at the first sign of trouble when the price is high. Although the latter might be considered a reasonable approach by many investors, members of the forum tend to view it as either cowardly or short-sighted.

Stonks: A humorous, intentional misspelling of “stocks” popularized through many memes posted to the forum. Pokes fun at the markets and traders in general. The memes started appearing around 2017. 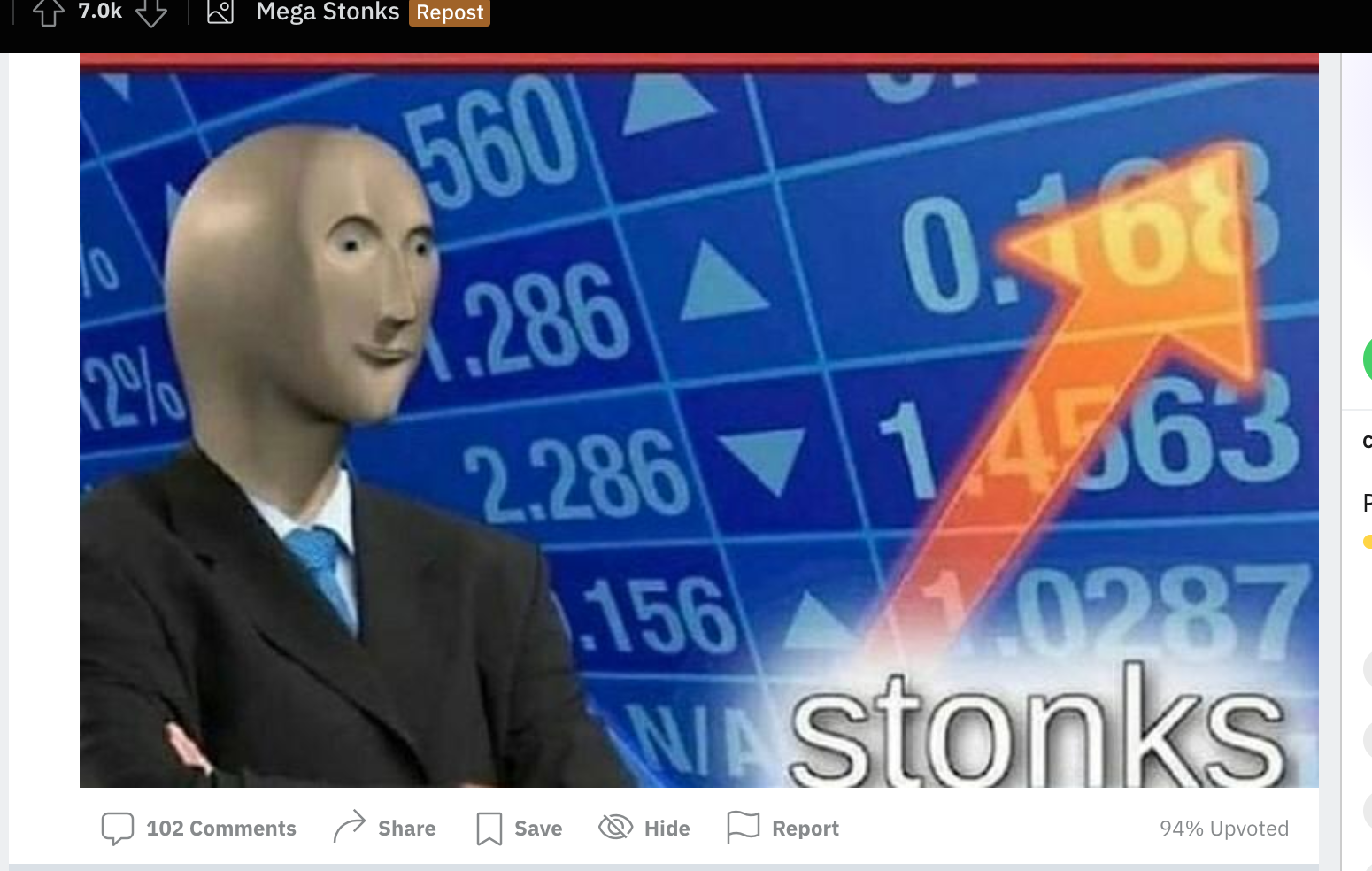 Tendies: Refers to financial gains in the stock market. It is a shortened form of “chicken tenders,” which is a play on the notion that traders on WallStreetBets are all jobless nobodies who live in their parents’ basements. Chicken tenders, to this vaguely fictionalized group, are regarded as gourmet meals.

“To the moon:” A phrase usually accompanied by many rocket emojis, and used to express confidence that a stock will rise.

YOLO: Short for “you only live once.” Refers to betting it all, or putting most of the value you have into a single position. One fan of the subreddit defined the term as “the act of making an entry without any technical or fundamental layout for an exit strategy.” 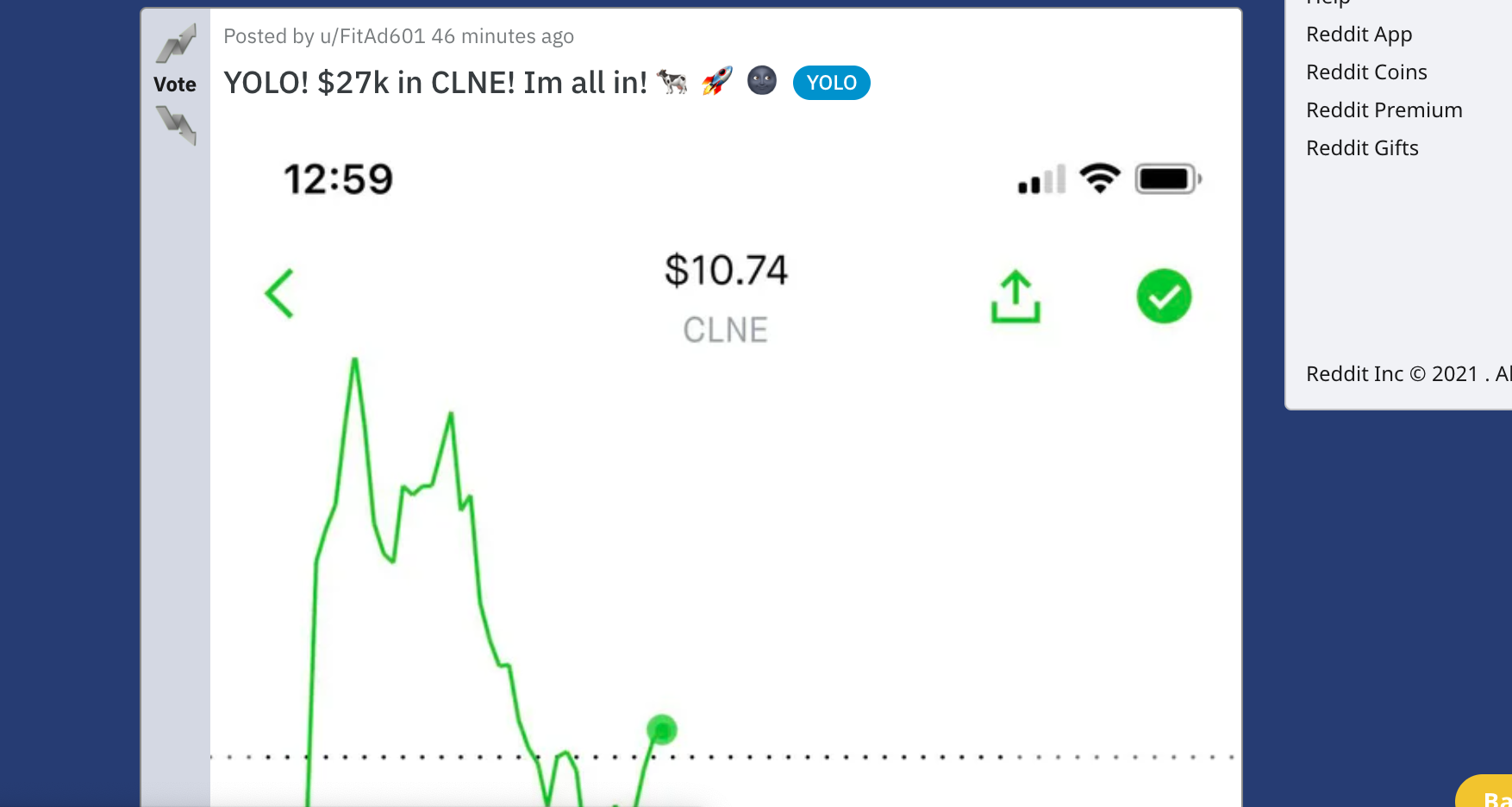