The ambitious, bold and hungry start their week with The Business of Business!
Innovation
1.9.19   3:34 PM Innovation

From juiced-up Lotus roadsters to a worldwide presence, here's what Tesla's footprint has looked like over time.

When Martin Eberhard and Marc Tarpening launched Tesla Motors in 2003, many people figured a few rich people were just fooling around. When Elon Musk joined the company with a $7.5 million dollar investment and subsequently plopped an AC motor into a Lotus glider, other investors thought they may be on to something.

The company continued to grow and develop, eventually going public ($TSLA) in 2010 and then releasing the Model S in 2012 to almost unanimously gushing reviews.

Musk and company had a plan: they would blanket the world with charging stations, service centers, and more.

Turns out that they may have made good on this promise.

The map below shows the current Tesla Motors worldwide footprint, including chargers, stores, and service centers. It paints a fairly convincing picture: Tesla is everywhere. That is, everywhere anyone would want to be. 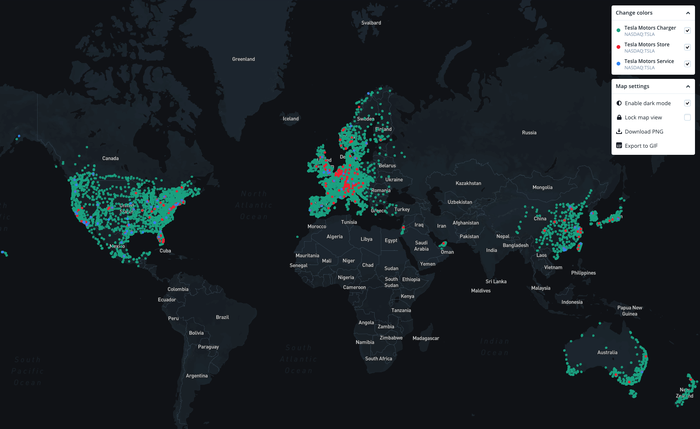 According to data that we track for Tesla's various real-world locations, Tesla has almost 14,000 chargers throughout the world. In May 2016 (according to our data), there were about 3,100 chargers.

Meanwhile, Tesla now has 438 Tesla Motors Stores throughout the world and almost 100 service centers (Tesla has opened even more Service Centers internationally since we last pulled the data, as you can see here).

In other words, if you're a consumer who's been on the fence about the practicality of driving and electric car in a gasoline world, chances are pretty good that you now have a charging station, store, or even a service center within a realistic distance from wherever you are.

Based on the clip at which new outlets are showing up, there's little reason to believe the current infrastructure won't continue to expand.

Tesla's international rollout has been steady, if not uneven. Elon Musk is — at this very moment — on a goodwill tour in China, promising to build a $2 billion factory in China, meeting with Premier Li Keqiang, and even cut the price of Tesla cars by as much as 26% to spark sales in the region.