The ambitious, bold and hungry start their week with The Business of Business!
Innovation
11.19.18   5:15 PM Innovation

As new owners look to buy Teslas and previous owners look to trade in, Tesla's e-commerce picture is getting more complex. Here's how it's hiring ahead of the curve.

New car shoppers are increasingly turning to Tesla ($TSLA) as it diversifies its vehicle catalog, makes its cars more affordable, and simply makes more of them. Meanwhile, previous Tesla owners are trading in their first-generation Model S's in increasing numbers. All of this spells an e-commerce ecosystem for the company and its customers that is becoming more complex by the day.

According to hiring data, it appears Tesla is well aware of the looming changes and is hiring to stay ahead of the curve.

In 2015, Tesla's Solar City took over two buildings located at 47700 Kato Road in Fremont City. The buildings were previously occupied by solar startup Solyndra. Hiring at the facility has been up and down over time, but it hasn't seen a spike in openings like the one that began over the summer and continues into today.

Turns out that Tesla is hungry for engineers with e-commerce experience to work at their Kato Road facility. 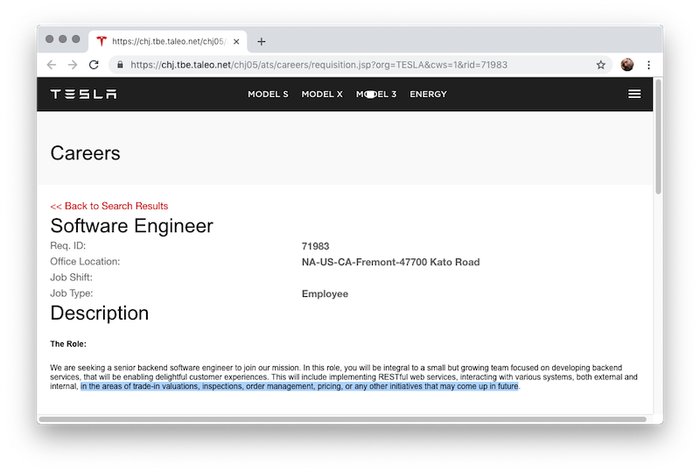 In fact, the vast majority of the openings look to be part of a growing Digital Products team at Tesla that's doing everything from improving the UI of its e-commerce process, to the buying process, to the purchase document management experience.

It's not surprising that Tesla is increasing its focus on automating the car purchase process, as its catalog of vehicles diversifies and its legions of customers grows. Tesla owners are trading in their first-generation cars for the first time and looking for replacements all while new customers are turning to the company as it's proven its staying power. 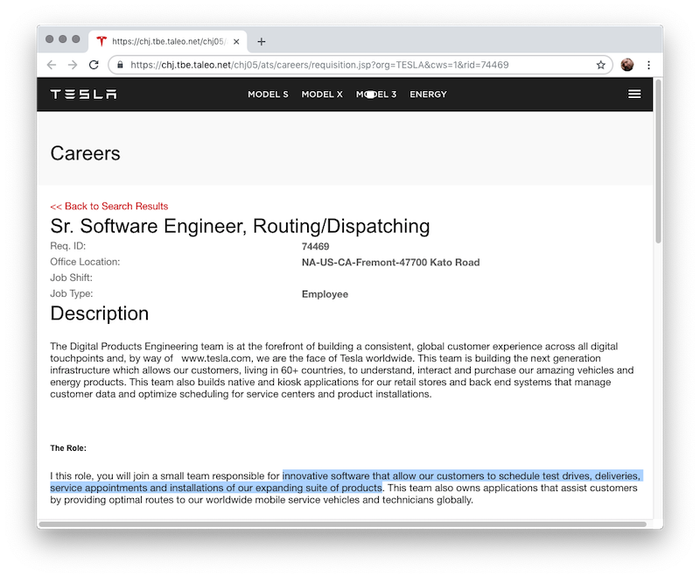 While Tesla is already an innovative company when it comes to online tools — from slimmed-down, salesperson-free showrooms to a streamlined ordering processes — there's little doubt that the company will continue to run ahead of the pack when it comes to how it uses technology, and these latest shifts in hiring show where its focus lies.

The full list of openings at 47700 Kato Road is below for the super curious.