Shopify is no longer just a back-end tool. It’s an e-commerce staple. But can the company's big focus on small businesses rival Amazon?

Shopify has been helping retailers build online storefronts and grow their e-commerce operations for over a decade, but 2020 marked a sea change moment for the company. As the pandemic forced many small and midsize businesses to embrace a shift to digital, Shopify Inc. was there to help— and reap the benefit.

Since March, Shopify stock has skyrocketed nearly 200%. The company charges sellers a monthly fee and takes a percentage of every transaction on its platform. Its Q3 revenue soared 96% year-over-year to $767.4 million. The Ottawa-based e-commerce company will report earnings later this month, on Feb 17. Analysts are saying the stock is a strong buy, and our data tends to agree. But it’s not just pandemic-induced store closures fueling Shopify’s growth.

The count of weekly active users on community.shopify.com, a forum where Shopify users discuss and ask questions about the platform and e-commerce in general, has increased by 184% over the last year, now with 461,000 users per week and 789,390 members total.

Shopify Community topics range from “storefront optimization” advice and guidelines around “sourcing and selling other people's products” to conversations about sustainability and building a “social impact brand.” This kind of engagement and merchant-first approach is the not-so-secret weapon that’s helping Shopify dominate the e-commerce space.

According to cart technology data obtained by 2PM, Shopify is behind 58.9% of all DTC transactions. 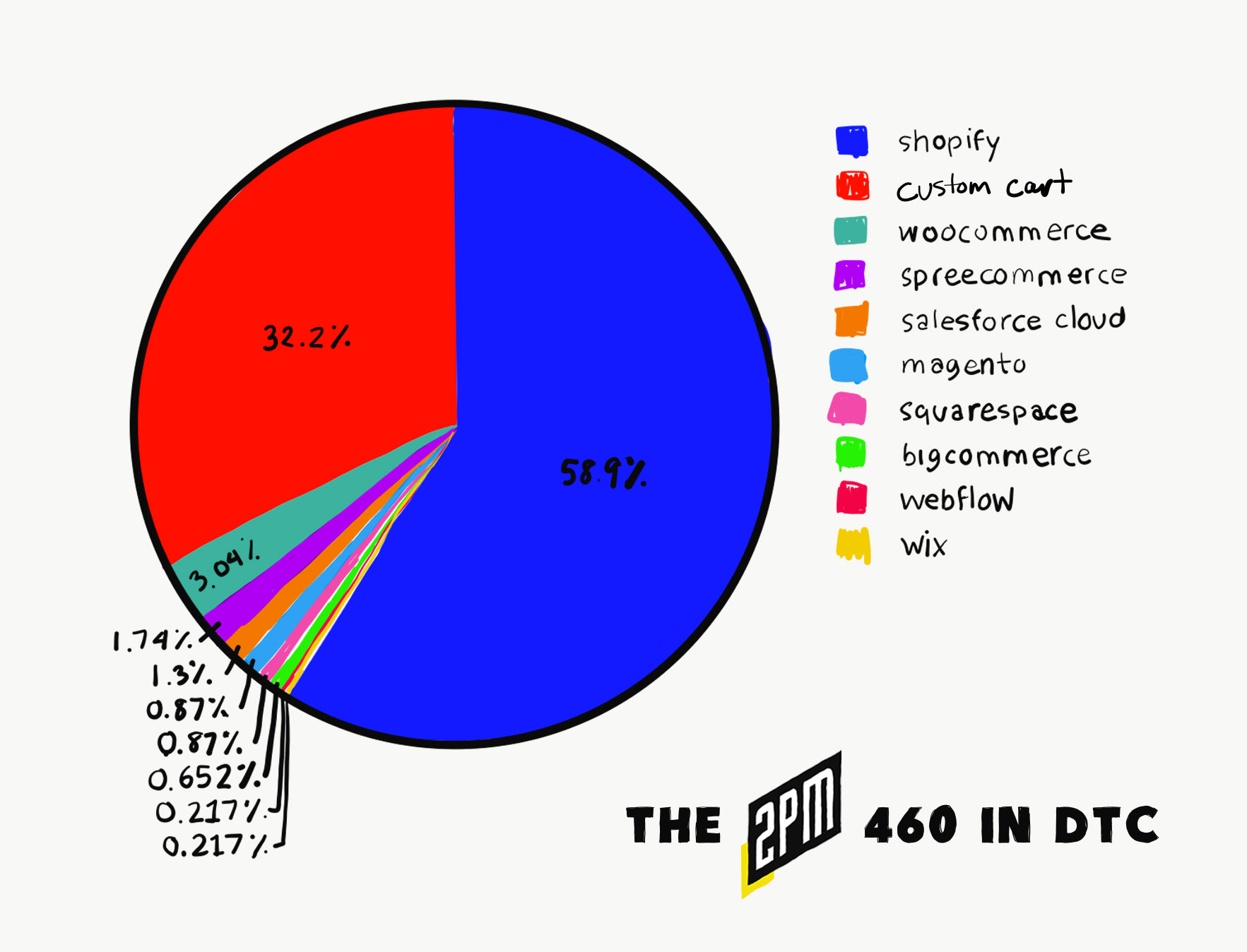 The pandemic-era expansion of digital commerce saw consumers leaning on Amazon even more than before, which helped the big tech behemoth eat up even more market share. Amazon reportedly watched sales climb 37% to $96.1 billion. But, as the orders rushed in and piled up, the company experienced supply chain issues and an increased focus on its shady (at best) business practices. Meanwhile, Shopify has been playing the long game.

Shopify president Harley Finkelstein claims the company adopted a new mantra when the pandemic hit. “The entire company simply pivoted as quickly as we could to focus on, ‘How do we help small businesses?’,” he said in an interview.

Name brands like Kylie Cosmetics and Allbirds have long used Shopify for their DTC transactions, but small businesses’ newfound need for e-commerce sites led the company through 2020.

Shopify vs. Amazon vs. Everyone

Shopify is in the process of building a new fulfillment center network, currently counting about a dozen merchant beta testers. The company plans to expand by transforming old warehouses from dying retailers like Abercrombie. Of course, Shopify is up against the robust Fulfillment by Amazon network. Marketplace Pulse estimates that 86% of Amazon’s top sellers use FBA.

Amazon clearly feels threatened by Shopify’s success, which could be a good sign or a bad omen for the latter e-commerce company. The former reportedly has a “secret team,” dubbed Project Santos, working to replicate Shopify’s business model with tools for brands to host independent stores. But, as it’s been pointed out, this goes against Amazon’s core goal of getting more people to shop on Amazon instead of independent stores.

Analysts have raised concerns about how many small businesses will weather the pandemic-era economic crisis, and if corporations like Walmart and Amazon will continue to monopolize US consumers’ spending.

It’s easy to overstate the death of physical retail and influence of e-commerce in the present climate. US e-commerce sales surged 37% to $200 billion in the second quarter, according to the Commerce Department. But it made up for less than 20% of total domestic retail sales. E-commerce accounted for about 14% of total US retail sales in the third quarter, down from a record 16% in Q2 FY20. That said, this figure was up big from the year-ago period’s 11%.

Numbers aside, online growth is crucial to businesses big and small, pandemic or not.  A Census Bureau survey of small business owners back in August found that 36% of respondents who work in retail didn’t have an online store. This is who Shopify is after.

Shopify’s market value of roughly $117 billion is bigger than eBay and Target combined, even though Shopify has a fraction of their sales or profits. FY20 revenue is projected to surge another 81% to reach $2.85 billion. Shopify’s 2021 revenue is then projected to climb another 30%.

The company's future growth plans include a new creator and influencer program, presaging the inevitable reign of social commerce as e-commerce and social media continue to commingle and dictate trends and buying habits. Shopify hired Jon Wexler, who oversaw Adidas’ Yeezy business, to lead the program.